As a treat for reaching the end of January- usually a long month but 2021 seems to take the biscuit- we ordered a box of vegan doughnuts from Crosstown. It was a box of 6, so we shared each one (half with tea in the afternoon, and half after dinner) on Friday, Saturday and Sunday. 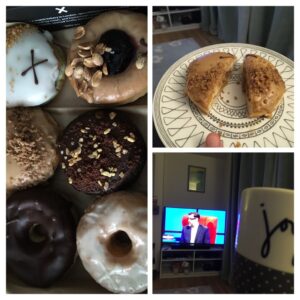 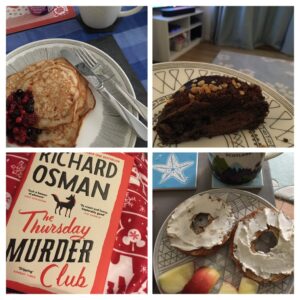 Reading a real book and not a kindle- and yes I’m still using my Disney Christmas blanket!

On Saturday I’ve been having a day off running and we’ve gone on a long walk together as our “leaving the house once a day” token. The weather was not very nice (sleet and rain alternating) and for some reason, even though I’ve worn my boots before, they rubbed my feet raw and they were so sore by the end. I’d got some bagels and Nush cream cheese which is just the best, so at least I had a nice lunch to look forward to once I’d hobbled home. 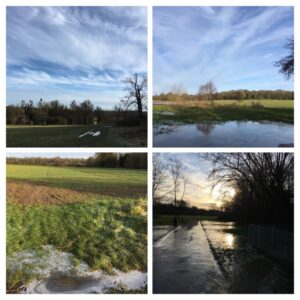 There was so much ice around on Sunday morning I had to change routes- I ran to Panshanger but would usually cut through a park, but the park had flooded and then the flood had frozen, and it was just an ice rink with no way around. 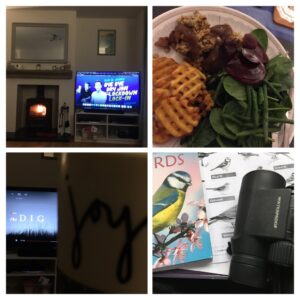 I decided to do the birdwatch on Sunday as the weather was better and I thought more birds would be out, so after breakfast and a shower I moved the armchair right by the patio door and set myself up, listening to a podcast while I looked outside. I saw a few birds but not as many as normal (eg sometimes I see around 6 goldfinches together, but I only saw 2). It was a relaxing way to spend an hour and very good to not be looking at a screen. Now the evenings are a bit lighter and the birds are out a bit more, hopefully I’ll see more of them.

For out afternoon movie we watched The Dig which was really good, then we had a roast dinner (nut roast etc) before watching a live podcast. 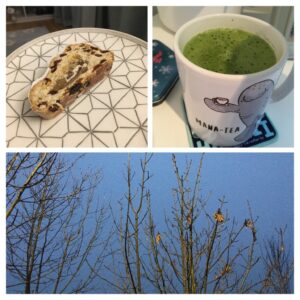 The week that followed was fairly standard, but at least at long last we are in a new month and spring feels a little closer. A run each morning for me, and matcha mid-morning. We bought a new flavour to try (Honey Bunny- vegan honey flavoured matcha) which is really good. Andy is getting very good at frothing it! We found a stollen in the breadbin (as you do) so had that in the evenings. 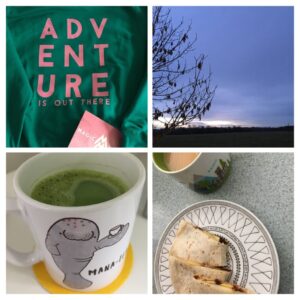 I ordered a top from Magic Moon club and it came this week. Plus a beautiful sunrise on my run, and a lunch of a wrap filled with apple, chutney and violife. 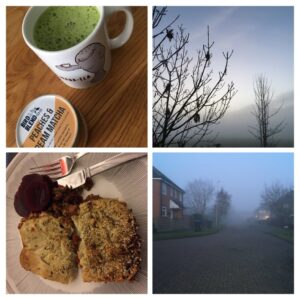 One morning it was super misty and my hair was soaked when I got home from all of the fog! It was very pretty, especially when you could see the moon. It’s been so good to get home in the light- I tend to leave at around 6.45, so I still need my light on then, but depending on the weather I can turn it off pretty soon, and definitely by the time I get home.

A little moan- I run past a bus stop, and the people queue across the pavement instead of parallel to it- the verge is very steep so I am having to scramble up the slippery muddy bank to give the queue a wide berth, whereas if they all queued on one side of the pavement I would be OK to give them space but not have to slip up the bank. 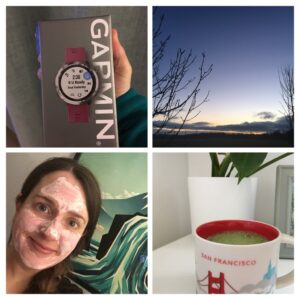 Another lovely sunrise, more matcha which was very much needed after a power cut as I was 5 minutes into a live lesson with my class!! and a face mask to chill out on Friday evening.

I had ordered a new running watch- my current one is OK but has a scratch on the screen now, and sometimes does not seem as accurate with the steps tracking. Anyway, we get a discount with Vitality, but in fact the watch was cheaper on Wiggle so I ordered one from there. It took a while to set up, but it now seems to add my runs via the wifi (I have no idea) instead of bluetooth?

I’ve had a good Friday evening routine the last few weeks- this week was mental health week, so we had a little colleague catch up via a meet after everyone had finished their live sessions. I then finished up work, did a bit of yoga and then had a face mask, had a shower and did a hair mask in the shower, and then put on comfy clothes ready for a pot of tea and some TV. We watched Baby Done, which was quite a funny film with Rose Matafeo, and a good way to end a week/ start the weekend (did make me want to go to New Zealand and go back to Canada though…).

How has February started for you? Do you like matcha? Do you get many birds in your garden? Do you have a bell on your cat if you have a cat?