Although the beginning of the week started well. I had a lovely surprise from my wellbeing buddy at work- she left me this vegan chocolate from Rhythm 108 and I have to say it is definitely a new favourite. After work I met Andy in town and we picked up our free drinks from Caffe Nero. I had a really tasty mint lemonade which was so refreshing. For dinner we had a Cook katsu alongside some freshly picked salad, and some pickled grapes. I really love the pickled ginger that you get with a Wagamama katsu, and this is close enough (just cut them in half and leave them in a bowl with some red wine vinegar during the day). 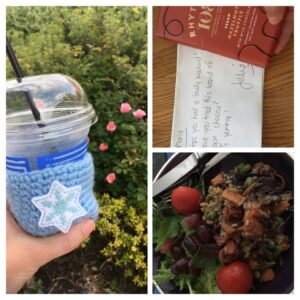 Mint lemonade, delicious chocolate and a katsu with homegrown salad and pickled grapes 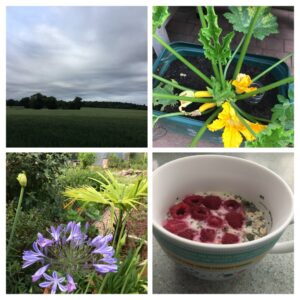 Tuesday was more overcast but OK- the rain stayed away for my run and then the day got quite warm. My mum had given me a special porridge bowl (it has markings on the side for the oats and liquid, and instructions for how long to microwave it for)- it was too hot for porridge but overnight oats worked well in the bowl too.

Following the delay in the unlocking of things, Brighton half marathon finally postponed their race until October. Confusingly, when I had booked it in the middle of last year, for Feb 21, they said that if it had to be postponed, they had agreed a date of 3rd October with Brighton&Hove council. Then it was delayed from Feb to June (not the October date), and now it’s going to be 10th October, so not even their original delay date… Anyway, luckily we could change our hotel date and running a half marathon in June was never going to be my best day as I don’t run well in the heat. 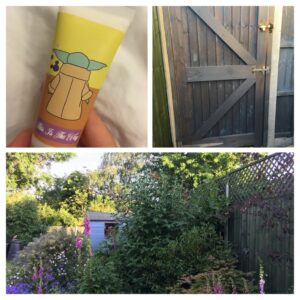 When I got home I decided to paint our gate (well, make a start on it anyway). It was too hot at the weekend to be out in the sun, but by that time of day it was shaded. It was so fiddly though, and the paint was quite watery so I made a big mess on the card that I’d put down. I was planning on doing the other side and second coats later in the week, but the weather did not play ball! 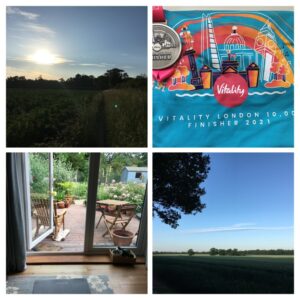 My Vitality top and medal arrived so I thought I’d wear the top on a run. It was so warm on Wednesday that I set up yoga in the living room. Usually I go in my office, but the sun shines in there all afternoon and the window doesn’t open that wide so it’s not the best when it’s very hot. It was good to take part in the class with the view of the garden- it reminded me of actually going to yoga as the space we use looked out onto some gardens (and sometimes in the summer we would take our mats outside and take the class under the trees). During the nidra session the rain started, and got heavier and heavier. I was thinking I would be soaked on my run on Thursday, but it had stopped raining and was just so humid. 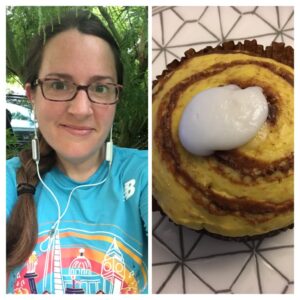 Andy had bought these Wicked Kitchen cinnamon rolls and they are the closest to the Starbucks ones that I have found- so often they are more like pastry whereas these are the bready dough which I prefer in a cinnamon roll. A good replacement if we were away for the weekend and wanted a quick breakfast to take with us.

On Friday the rain properly fell down- crazy flooding everywhere. We managed a quick walk before dinner, partly in between the rain (and thankfully when it started up again it wasn’t too heavy) and then watched the football.

On Saturday I went for a run with Dad, followed by breakfast in their garden. Our run was very enjoyable- we did our “classic” (not) parkrun route, in reverse (we run to Jersey farm, do a lap and run home a different way). We saw a few runners on the Jersey farm route (it’s a two lap course but both laps are slightly different)- one guy said to us “4 weeks to go” when he saw our parkrun tops, and then as we finished he passed us again and said “actually, 5 weeks to go!”. Even something small like that is so nice to have, and I really hope that it doesn’t get further delayed….

Andy was off into London for a work thing, so in the afternoon I decided to have a long walk in Panshanger. Now, I love seeing the cows, but I am not a fan of being in the same field as the cows- I prefer to look at them over a fence. These ones are meant to be a docile breed, but they still have huge horns, and as there were calves everywhere I didn’t want to annoy them. 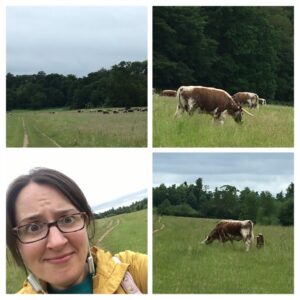 Thankfully I made it through – some were right by the path but seemed intent on just eating grass.

Of course I stopped at the amazing Planted Coffee van (all their food and drinks are plant based and they do an amazing assortment of baked goods). I went for an iced tea to accompany my walk, and then a piece of rocky road for us to share later (novel because it usually isn’t even veggie let alone vegan due to the marshmallows normally containing gelatine). 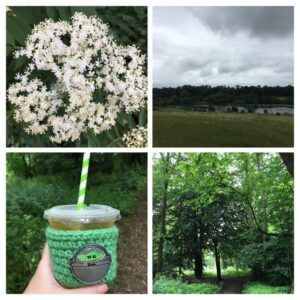 It was fairly overcast on my walk back, but it didn’t rain until I was home. 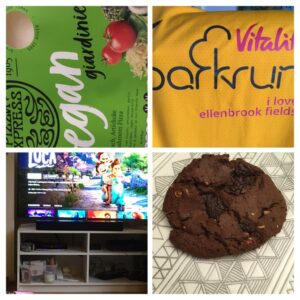 We had an Italian inspired evening with a pizza and then watching Luca, which I really enjoyed. The story was a lot smaller than a typical Pixar, but very sweet characters. Andy had been to Pret on his way back from London and picked us up an almond chocolate cookie too.

I then had a bit of a weird night- I went to sleep feeling fine, but woke up at half 2 feeling sick. I went to the bathroom and was just so dizzy I had to lie on the floor for a bit. I wasn’t sick thankfully, and started to try and get back to bed. I fainted just outside the bedroom- luckily Andy had woken up and saw me fall backwards and helped me in to bed (I thought I had just lay down on the floor in the hall, and when he ran over to me going “oh my God” I thought that he was making a bit of a fuss, but when we talked about it in the morning he said that I fell backwards out of the room and totally fainted- no wonder he was worried). I slept until 10:30 which is so unusual but I felt fine when I woke up. (I did speak to the doctor about it who said that it can happen with no clear reason, but if it happens again in the next few months they will investigate further). Anyway, on the Sunday I took it easy- no run obviously- we watched some TV including Penguin Town, did a bit of gardening and had a walk in the afternoon. 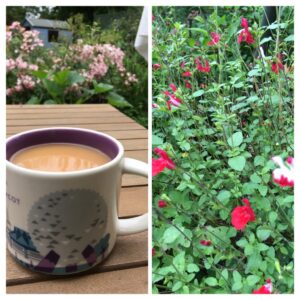 I did have a lot of excitement when I saw a little frog in our garden- I was doing some weeding and moving a few old stones and it just started hopping- it was so small (maybe an inch long) and I wouldn’t have seen it at all if it hadn’t moved. We are trying to make our garden better for wildlife- we added a pond, we’ve got log piles around, lots of flowers for bees and a patch of lawn that we don’t mow any more. Hopefully this is a good sign that it’s working.

Do you have much wildlife in your garden? Do you like cows?