France has never been the easiest country to visit for vegetarians let alone vegans. When I was vegetarian I would struggle a bit in France as they didn’t ever quite seem to understand that I didn’t want meat, so I approached our trip with a little trepidation. I looked online in advance (for blogs and so on) but again couldn’t find very much. I would say it wasn’t as bad as I thought it was going to be! Disney’s website seemed to indicate that every restaurant/café will have a vegan option, but I ended up going in circles a bit, usually being referred to the “allergy menu”. This lists some restaurants and then has a long list of food apparently available at each place, but it includes things such as gluten free items (which were not all vegan as some contained egg). I felt more confused after looking at that than I did before! You can look at the menus individually (download them as PDF’s) but that takes ages as there wasn’t an easy way to search. Some of the menus seem much older- for example the Chez Remy menu listed a vegetable tofu which seemed like it would be vegan, but marked with a green v, which meant “vegetarian suggestions”- some of which contained laughing cow cheese (remember that? Bleurgh), so I would not be confident that the tofu dish was totally plant-based.

We stayed in an off site hotel, planning to have breakfast in the room before heading to the parks each day, and as I wasn’t sure what the supermarket would stock I took along some vegan pain au chocolate with me. It turned out to be a good decision, because even though I’d read that the big Auchan had a vegan section, I couldn’t find it (of course the fruits and veggies are a big vegan section).  We bought some fruit and bread in there to take with us to the parks, and had also taken along a few snacks from home, so we only needed to buy one meal each day in the parks.

The only breakfast option that I could find in the parks was fruit (and some places did fruit cups that were not labelled as vegan, even though other things were- not sure if they just leave it because they think it’s obvious that it’s vegan, or if they contain some preservative that isn’t vegan friendly)- fine, but not really comparable to the croissants, pancakes and waffles available for others. WDW has loads of options including vegan waffles and vegan French toast- Paris really needs to catch up. 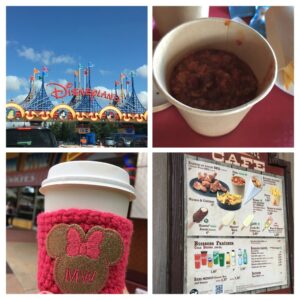 I was pleasantly surprised when walking around the parks that some places had clearly labelled vegan items on their menus. We found a stand in the studios that sold vegan chilli (when we were there in December 2019 we found it but it was never open when we went to get some- I still have no idea how you find out when it’s actually open…), and Last Chance Café in the main park. It was really good, and would be perfect in the colder months too.

A couple of places sold vegan Magnums but these seemed very limited and most places had just the regular ones. If you want one, buy it when you see one! 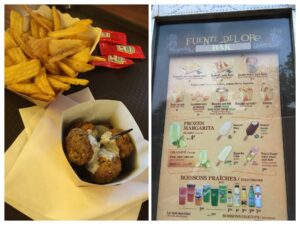 Falafels and the menu with the vegan magnum on there too

In the main park, the Fuente del Oro Bar in  Frontierland had a good option of falafels with a vegan sauce. I ordered in English here because they also sold chicken nuggets, and my French accent is terrible and I didn’t want my terrible pronunciation of “bouchees aux pois chiches” to be mistaken for chicken nuggets. Anyway, they were tasty. We’d walked past the menu for the Hakuna Matata restaurant, and they had a really nice sounding salad (sweet potato, beans, lettuce, pineapple, tomato, grilled peanuts) but the queue was huge and so I didn’t try it on that visit. There’s always next time. The falafels would have been nice with a salad to go with them. 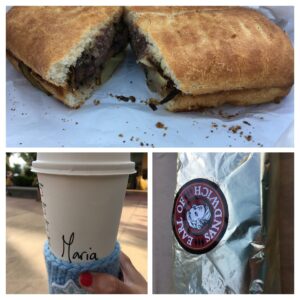 Between the two parks you have Disney Village with plenty of dining options, although again looking at the menus the best option seemed to be tomato pasta- not the most exciting food for when you are on holiday. There’s a Starbucks there, although it didn’t have any vegan food options the couple of times we popped in (it did have a big range of plant milks though).

The Earl of Sandwich didn’t have a vegan item on the printed menus, but I’d seen online that they were doing a vegan one. We went to the screens, and could order “The Portobello” ( 100% VEGAN -Portobello mushrooms, fried onions, green peppers and agave mustard dressing). I’m not a big mushroom fan, but it was OK. I saw it on their social media in Feb 2020, and I can’t find it online now, so who knows if it’s there now. It’s worth looking at the screens though. I was hoping that they still did the tomato, balsamic and mozzarella one that they do in Florida, as you can swap out items, so I could swap the cheese for avocado and have a delicious sandwich, but it wasn’t to be.

In summary, there are vegan options there, but if you are going for more than a long weekend, or eating more than one meal a day in the parks, it’s going to get samey quite quickly. On our next visit I think I’d do pretty much what I did this time- bring along breakfast and snacks, and get one meal in the parks/village each day.  The DLP Instagram account released a video a while back of the vegan options that were coming, including a vegan burger, but I didn’t see that anywhere, and it wasn’t clear in the video either.  It’s great that they are clearly labelling more items, and having a few options in each park, but I am sure they can do better. They need to sort out the labels on the menus to make it clearer too. So, you’ll find vegan options but it might not be the treat that you are after on a holiday.