So this weekend was time for more parkrun tourism, as both Jersey Farm and St Albans were off due to events taking place. As it was Dad’s 200th parkrun, it was his choice, and he chose Rushmere.

Partly because it’s a beautiful woodland trail run, and partly because they have a gong! My brother was also coming too- he sometimes plays football on Saturdays so doesn’t go to parkrun as often, so it was perfect timing that he could make it too. 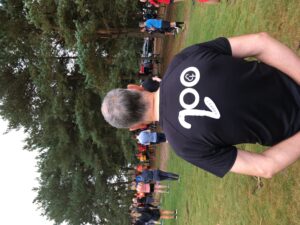 The run brief was observed in silence, and then we walked around to the start. I’d remembered it as one and a bit laps, but it’s really just shy of 2 laps. It’s through woodland, past bike trails and bridleways (no dogs allowed because of this)- we did see a horse on our second lap.

The route is just beautiful and so peaceful. The pine trees are so tall, and it’s shaded and cool, filled with birds singing and then the gentle sound of runners feet on the soft earth. The three of us ran together and just enjoyed chatting, thanking the marshals, waving at the photographers and saying good  morning to the other park users. Andy always asks me why we do this when we could just run a 5k around near home, but I just feel we are so lucky to have places like this nearby and we can experience such a range of parks and places while enjoying running. 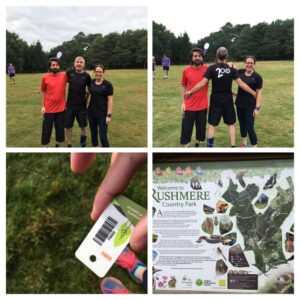 On the second lap one of the marshals called out to Dad, and it turned out to be the headteacher from my first school (Dad was also a headteacher in the same town, so they knew each other a bit, and his wife who was also a head). As Disney say, it’s a small world! When we finished we saw his wife and chatted to her too. 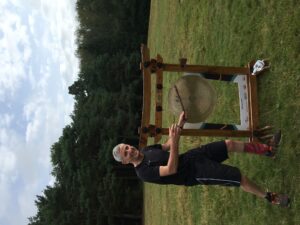 Then of course we had to visit the gong of glory. There was hand sanitiser to use first (of course) and then as he hit the gong, lots of people clapped. It was a really nice way to mark the occasion. (Yes we know 200 isn’t an official milestone, but it’s a long way between 100 and 250 even without the long pause, so we are going to celebrate these things).

Then it was time to head home for breakfast cooked by Mum. Our next milestone will probably be my 250th (I’m on 241 now)- Uncle Brian is on 97 but he is injured at the moment so I’m not sure when his 100th will be. I’m not sure what I am going to do about it though, as Ellenbrook Fields is still closed. I did my 50th at Panshanger, which I loved, but that was before EF started, and I don’t feel such a part of that community any more. EF was where I celebrated my 100th and it feels like my parkrun home, so I can’t decide if I’ll go to another local event (I could go back to St Albans where it started for me?) or do a bit of tourism?

What milestone are you working towards?

2 thoughts on “Rushmere parkrun for the gong of glory!”