So last weekend we were home for once, and as my dad and brother were also home, they were heading to Panshanger parkrun, hooray! It has been ages since all three of us ran together as my dad has had to rest his knee for bit, and they have been away cycling. It was a Halloween theme, but as I have mentioned before, I am not a dressing up fan, and all I had was a witch hat, which was at school (locked at the weekend)- a good excuse to wear normal bits!

As I had not run for 10 days, I stayed a bit further back at the start, and it was great. I was cold at the beginning, having chosen to wear my vest (the weather said it would be 16, but I think they meant later on…) but anyway, after a mile I warmed up. I passed one of the OH ladies trying to get a sub 30 (she managed it! Hooray!) and I did think about my parkrun style. I don’t tend to go for a pb or even go flat out. I am always struggling to breathe at the end because of the final hill to the finish (it’s very steep) but then of course that is not what it is all about. I really enjoy the scenery, and waving and saying “thanks” to the marshals, and just being out in the fresh air. I could run a bit faster, but then I would not enjoy the whole run, just the split second when the text comes through. I am trying to stay under 30 mins for this course (I think I did 29.24 or something) but really I don’t mind.

Anyway after that it was home for a shower and breakfast, a walk into town to return our Iceland guide book and a few other bits, soaking the fruits for the Christmas cakes… 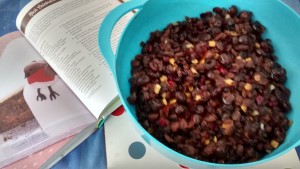 (And you can all remember what happened with that last Sunday…)

Onto Sunday morning, and I was off on a club run. They usually meet at 8am on a Sunday, but I don’t tend to run with them because either I want to run a specific distance, or I want to not set an alarm (even though I often wake up around 8, or just before, it would not give me enough time to get there). Anyway, we did an 8.4 mile route, with some big hills. It was very foggy, so at points I could not see the runners ahead. The route is mainly through country roads and tracks, and we all wait (well, they all waited for me) at the top of each of the three biggest hills for everyone to catch their breath. Near the end we had to cross a dual carriageway and even though it was still foggy, so many cars had no lights on, so it was hard to see them. Scary. It was an enjoyable run, nice to chat with others, and lovely to run through the countryside- I would have got lost if I had tried it on my own. 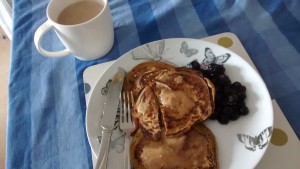 I had pumpkin pancakes, maple butter and blueberries to warm up when I got home.

Later, I popped to town, in my massive hoody and coat (because I was cold after that run)- well, it was so hot out! 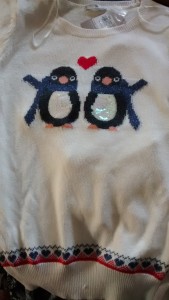 Sainsbury’s were doing 25% off clothes and I could not resist this cute penguin jumper! 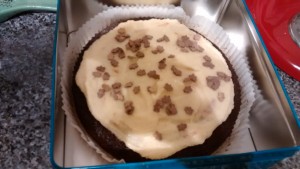 As well as the Christmas cake baking, I made a gingerbread cake for work, although I don’t remember which recipe I used now. Sadly the tin fell over in the car (up-side down) so it looked more of a mess when it finally got to work!

I do like going away (especially for a race) but a weekend of parkrun and then a relaxed long run on Sunday is such a lovely way to spend a weekend.

6 thoughts on “A lovely weekend of running”