Years ago (in 2011) we went to Nottingham to do a 10K trail run through the Sherwood Pines forest and I loved it.  The recap is here if anyone is interested.

For the last few years we have not been free on the weekend of the race, but this year we were, so booked it again. Although this time it was on Saturday, originally at 11, then 1, and then moved to 12.30pm.

Anyway, we drove up on Friday night after dinner, and stayed in the centre of Nottingham. The race was about an hour’s drive away, so after a breakfast in the hotel (a hot cross bun for me, yes a bit random, but that is what Andy had bought) we headed out there. The setting is lovely, and a new parkrun has just started there too, but I thought that would be a bit much (plus a lot of hanging around in between). They have some cycle events on the same day, and a duathlon, and although it had rained a bit, we saw some cyclists covered head to toe in mud (and I do not exaggerate- completely covered faces and everything). We were hoping that was just because of the speed bikes go at that they flick the mud up. 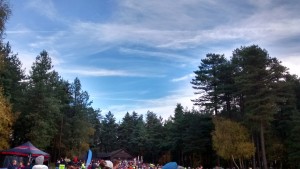 The blue sky appeared after we went to the bag drop. 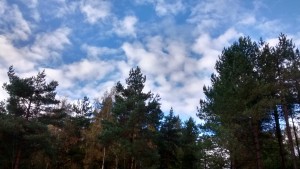 Anyway, after collecting our numbers we still had nearly an hour to wait, so we sat in the car for a bit as it was raining. I don’t normally use the toilets before a race, but here there is a proper building with real toilets, so I headed there, only to get caught in a burst of torrential rain. I was dripping all over, not good because under my coat all I had on was my vest, and I had to leave my coat in the car. Just after 12 we headed to the bag drop and waited around for the start. 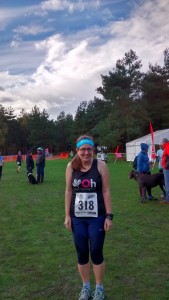 You can see the darker colour of my capris where they got soaked! I was very cold here! Although it was 16 degrees so not cold at all- I saw some people in woolly hats and long sleeved tops and loads of layers.

There were kids races going on so we watched those come in and then the 5k and 10k runners were called to the starting funnel. It was so muddy there- ankle deep puddles and thick squelchy mud. The guy starting said something like “the quicker you run, the faster you’ll warm up” as I think everyone looked cold after the rain shower.

Thankfully the rain didn’t start again, so I could enjoy the scenic route (instead of peering through wet glasses). It was really busy at the start, and everyone was trying to avoid most of the puddles as some of them were huge- this was hard when the person in front was so close- sometimes you saw the puddle in time, other times you didn’t. I heard a lot of people say it would thin out on the second lap due to the 5k runners finishing, but that made me wonder if anyone was doing the 5k! The route was undulating, mainly on forest tracks but at some points there were rivers of water running down the tracks. I didn’t have a time goal (not sure if this helped or hindered in the end though)- I hadn’t looked up my previous time but I knew it was over an hour as the first time I did that was in Brighton. I thought anything close to an hour would be good, especially with all the mud avoiding.

During the first lap I was overtaken by a really really smelly guy. It was like he had not had a shower for days, it was horrible, and even when I was a good few metres behind him I could still smell it. It was making me feel queasy, and I could not face another lap like that, but he didn’t seem to move any further ahead of me, so when we got to a hill and he slowed, I decided to power past him. That was good, but then for the next section every time I could hear a person coming up behind me, I panicked that it was him, and tried to speed up, and then gave myself a stitch. The overtaking on the uphill, and all the jumping to avoid the biggest puddles really took it out of my legs too- they were tiring quickly.

When we got to near the finish area, there was a marshal shouting at everyone “5k runners turn right to the finish, 10k runners straight on for the second lap”, which I did wonder about because I remember last time running through the start/finish area in the middle. I had mentioned it to Andy because last time they read your name out as you went by which gave me a bit of a boost, and also on the start line I was thinking about the awful mud and how we would have to run through that patch again. But anyway, I was focused on the smelly man more, so didn’t think that much.

It did really thin out on the second lap, but even with the same number of runners it would do I suppose. I really wanted to stop and take some photos as the sun was getting stronger and the trees looked fab in the late autumn sunlight, but then the man…. Anyway, he overtook me once again but I was too tired to try again, so instead eased off so he was further ahead. At the 9K mark my watch had only beeped for 5 miles, so I did think it was a bit off, but did I mention I was tired? I wasn’t too bothered! The finish area is up a hill, on a muddy used-to-be-grass field which made it tough, and then the finish straight was just a slippery slidey muddy mess. But there it was, and again the announcer was reading out names (and Old Hatfield Ladies got a mention! Woo!). I was handed a medal and a cup of water before I went to meet Andy. 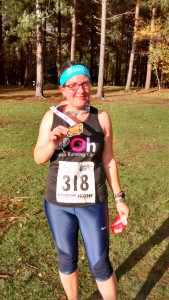 Not so cold any more! 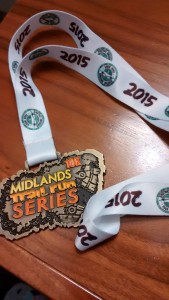 It’s a lovely medal, but I was expecting a t-shirt- I really liked the one from last time- it was cotton but a good fit, not a big baggy one, and had a nice logo on it, and I do still wear it now.

I saw a few things on their facebook page about the route- some said it was shortened due to health and safety, and some due to a marshal error. Whatever it was, I don’t mind, but I would be disappointed if I was going for a pb, or of it was my first 10K or first race. They had made a big deal this year that the distance was UKA certified, which makes it worse really, as normally trail runs I don’t think are the most accurate. 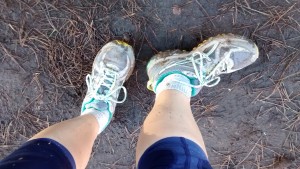 OK so I don’t look that muddy here, but when I had to peel my socks off they were totally brown! These trail shoes are not waterproof like my old ones, and I had mud all up the back of my legs. We had packed jumpers and tracksuit bottoms to put on over our clothes (well, I took my capris off as they were soaked) as we had the drive back to Nottingham. Anyway, I was so hungry when we finished (it was around 1.30pm by this point) and there was a cafe right there, so we went for tea, and shared a slice of almond and cherry tray bake. Then we changed and headed back. After a shower and a banana (we had packed some) I felt so much better, so we headed out for a wander around the shops. We had booked dinner for 5.30pm, so it was too late for lunch. 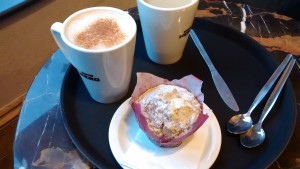 After a bit of walking we had a drink and shared a gingerbread muffin (amazing)- we normally share cake but as we had not had lunch, sharing two cakes = 1 cake each which isn’t too bad.

More shopping, then dinner (lovely Prezzo salad) and then to the cinema to see Spectre. Which was alright (I don’t think I have any spoilers but skip if you are worried!). I just don’t get all the raving though. I mean, it’s OK, but it’s not Bourne even though it really wants to be, and I don’t even think it’s as good as Mission Impossible- at least they know they are tongue in cheek. I won’t go on but I really feel like Bond needs to get into the 21st Century now- one second women are saying they won’t be seduced by him, and the next minute they are in bed together. I mean, I just sighed through a lot of it. And rolled my eyes. Sure, the action stuff is fun, and there were humorous moments, but it was a bit Austin Powers in places (I’m not going to kill you, I’m going to set some sort of trap that you can’t possibly escape from… oh, wait…), plus every time I see Daniel Craig pouting at the camera all I can think of is Alec Baldwin in 30 Rock saying “Haven’t you seen how blue my eyes are Lemon?“. Such a cheeseball! Anyway, nice to sit down after all that running and walking.

This morning we went out for breakfast, and had another wander around the town centre before driving home. Last time the run was on the Sunday so we had to drive home in our running kit- not quite as nice! I still enjoyed the run, but I would have preferred a t-shirt over a medal (because the t-shirt was unique and a good fit), and also we didn’t get anything apart from water at the finish line, whereas last time we got a banana and a little goody bag. I might have to hunt for some better trail shoes though- I got them on holiday back in May, and have worn them a few times but nothing as muddy as this. My lovely Panshanger parkrun does get to be a bit of a mudbath in the winter, so proper ones will get some use this winter.

Are you a fan of muddy runs? I don’t mind this sort of mud, but I don’t want to wade knee deep through anything!

Bond fan?  Give me Bourne any day of the week!