So, winter is now here!

This week has been a funny one with running. We did the same route on Tuesday night as we have the last 3 weeks, but in the wind (and with tired legs from the weekend) it felt tougher.

On Wednesday I had a lovely run by myself, 3.3 miles in a figure of 8, and it wasn’t too cold. On Thursday I missed pump as we were taking Andy’s parents to the airport, and on Friday I did think about a run, but I was tired and my throat was sore, and it was cold, so I didn’t.

Anyway, Saturday morning I wrapped up very warmly as it was snowing and I was marshalling at parkrun. I had a couple of crumpets and some mint tea before- I would not eat if I was running, but because I was just marshalling I knew I would need something. Thankfully the snow stopped, and hadn’t settled, but the wind was bitterly cold. My dad picked me up as he and my brother were running- they waited in the car while I walked to my marshal point! 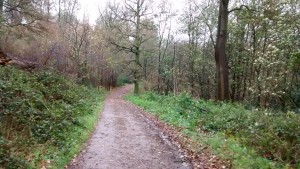 This is the track that the parkrun begins along, and my point was at the end where runners turn and head up a gravel track. 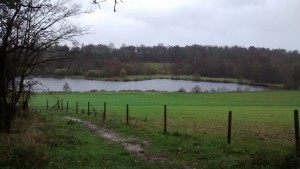 I could see the lakes, which you run around near the end. 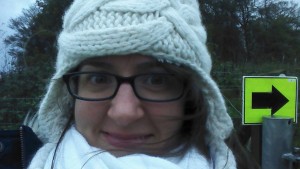 Walking along the track was fine as the trees kept you sheltered, but where I was stood was right in the wind- when I took some photos my gloves nearly blew away! And even though I had on my hat and a scarf, the band holding my ponytail had nearly fallen out- it really was so windy. 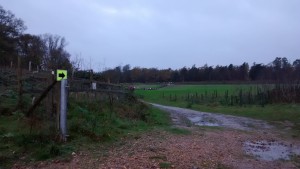 As my point was near the start, I only had around 5 minutes where runners ran past, so I was (hopefully) very cheery, shouting “good morning” and “the faster you run the warmer you’ll get”. I do love being a marshal and I love how many runners manage to say thank you through their heavy breathing too. At 9.10 the tail runner went past, so I took a photo of them heading up the hill- like a line of high viz ants! Then I took down the arrow and walked back to the start.

As I got there, the first runners were finishing, and it’s always amazing to see these speedy runners power up that final hill. While I was waiting for my dad and brother I chatted too a few other spectators- there was a big turnout from a Stevanage running club, and it turned out they were doing a similar thing to my club with the beginner running group doing the 5k as their “graduation” which was lovely. My dad and brother finished well, and I think they were relieved I was at a point close by so they didn’t have to wait for me. I had planned on running once I got home, but it was so cold!

I am on a running facebook group, and I posted on there about being reluctant to head back outside (it was soooooo cold) but one of my friends (who did timekeeping at parkrun that day) said “I will if you will” so I changed before I got too warm. 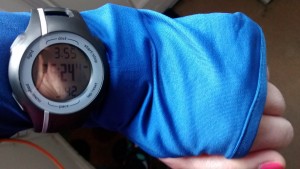 I did a new route, which ended up being 3.5 miles, but my ears were so cold the whole way around they were properly aching. 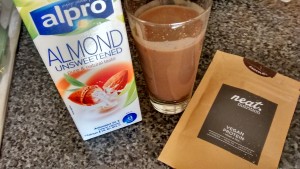 I tried some of this neat nutrition vegan protein powder, which actually tasted quite nice, but even though I used my little milk frother thing, it didn’t all mix and was very very thick. I have another packet and I might add some to porridge to see if I like it like that. 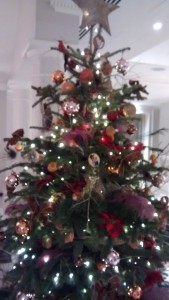 Then I was off to London for an afternoon tea. Although they weren’t serving the festive food yet, it was decorated beautifully. 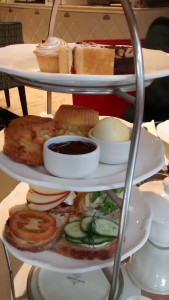 Mmmm this was all mine!  Those crumpets (and that protein drink) were a long time ago. 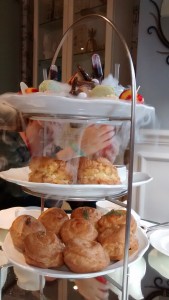 They went for the science afternoon tea (the hotel was near the Science Museum)- they did say they could make me a veggie science one, but I liked the sound of my one more. It did look eye catching with the pipettes, chocolate dinosaurs, macaroon planets and all the smoke. Our booking was 2.30 and we left just before 6! A long catch up. Then the tube was so busy we ended up walking for 10 minutes (including past Harrods with all the tourists!) to get to another stop (we would have been waiting for over 10 minutes to get into the station), and then on the overground it was so squashed because people were not moving down inside the carriage that a nice man had to shout “move in please” so I could squash in, otherwise I would have been waiting another half an hour. Phew.

This morning I was off for the 8am club run- after being so cold yesterday I wrapped up warmly- a t-shirt and thin long sleeved top, buff, ear warmers, gloves and tights. That turned out to be just right- I didn’t even take my gloves off and we ran fairly quickly- all sub 10 minute miles. I needed a tea when I got home before I could face getting undressed for a shower! 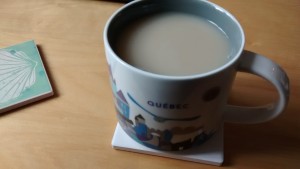 We had to pop to town for a few jobs, and I also did a bit of baking! Hooray! 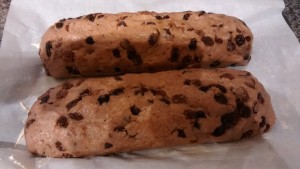 I used my mixer to make the stollen dough and it was so much easier than kneading it by hand. We are going to see my parents later so will take one around for them.

Are you a fan of going into London? I love being close, but a day is enough!