I had a brilliant weekend in Brighton! We got the train late on Friday, and our hotel was right by the station so we headed straight there. 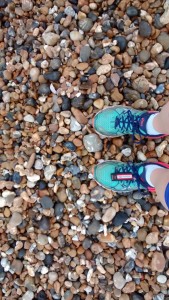 On Saturday morning I jogged the 1.5 miles to the start of the Hove Promenade parkrun (which is a fairly new one- this was event number 17). I left way too much time, so ended up hanging around for a while before the start, sheltering from the wind by standing between some beach huts.

The team were welcoming, and the new run briefing explained the course; two laps of the promenade section, starting in the middle. It was so windy, and we starting off running into the wind which was just so tough. But I think that was the better way, as you then had the long section with the wind behind you, one long section into the wind (and as you ran past the start/finish the timer person was calling out times which was a nice touch), another long section with the wind behind you, and then the final  half length back into the wind again. It started raining gently after about 10 minutes, but as I finished this got heavier to I quickly scanned by chip and headed back to the hotel. The national results were down, so I didn’t get my time through until the afternoon, and I had no idea because I had started my watch on the run down there. Anyway, I ended up position 64/108, 27.39, which is my fastest parkrun time this year! I was impressed with that! On a side note, I wore my 50 top for the first time and love it- it’s lovely and long, the neck is a bit wide so the bra straps show, but it is so comfy and the fabric is lovely and soft.

Anyway, on my way home it started bucketing it down. I had worn a top on the way, which I tied around my waist when running, but even with that I was getting very cold, and I was near a Pret, so I popped in for a bottle of water and a hot chocolate, and then had to get the courage to go the final half mile back to the hotel. Our room only had 2 towels, so when I got back I asked for another one and the lady behind reception looked very shocked and got me 2- I was dripping all over the place!

After a shower we headed out to Cafe Coho for breakfast, and then spent the day wandering around Brighton. We had booked for dinner at Food for Friends, which was fantastic. We shared a started of tahini dips, I had the most amazing salad of sweet potato, avocado, quinoa, tomatoes, green beans, hazelnuts and feta, and Andy had a portabello burger (and lots of my feta as I am not a huge fan of that and there was loads), and then we shared sticky toffee pudding- we were so full after that and attempted a walk along the seafront but it was so windy that we changed our minds!

In the morning the alarm didn’t go off, so I woke up at 8.20- the race started at 9.30! Thankfully we had enough time to eat our Clif bar, get dressed and head down to the start. I took my long sleeved top with me to wear before and after. It was still so windy! Argh! This year the route was the same as previous years, but in reverse, so instead of heading east at the start, where it was narrow, to ease congestion we would head west towards Hove, as they use the road at that point. That made sense, but it also meant that everyone was arriving from the west, and then having to battle past the start line, bag drop and tents to then face the other way in the start pens. I think we got there with 5 minutes to spare! 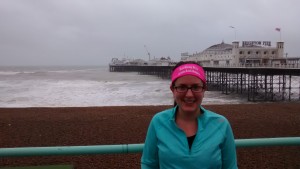 I had looked up pacing for 55 minutes, as last year I managed 55.23- it is a flat course, and in Bournemouth earlier I managed 56.07 with stomach ache (it was after lunch). This time meant 8.51 minutes for each mile, but because it was raining on and off I left the actual mile split times in my pocket as the ink would just run, and decided to try and use the km markers instead. We started off running into the wind, heading west on the road towards Hove. This was tough, but I felt OK. I looked at my watch at the km markers, but for each one I was about 10 seconds behind the 5.30 per k that I would need to get 55 minutes. But seeing as that was into the wind I was not too bothered and just wanted to get as close to it as possible. It did seem less congested than previous years, and I didn’t ever feel like I got stuck behind people (although with the wind, that would be a good thing!). At around 3km, we turned around to come back in the other direction but along the promenade instead of the road, and I tried to pick up my speed as the wind was really blowing me along (and kept smacking my pony-tail into my face). I overtook a lot of people between that and the 5k mark, where the path narrowed (as they are building the big sky tower)- again though I didn’t feel like I got stuck at all because by then the field was more spread out. At the 7k point we ran past the finish, and the speedy ones were already done- I saw a few ladies but mainly men at that point- very impressive in that weather. That next section was not so enjoyable as I had got used to the wind blowing behind so I didn’t feel like I was getting such a boost, and the final turn-around point seemed to take a while to come. I occupied myself by looking at the runners going the other way- I saw Andy heading back towards the finish. Then, the dreaded turn around point. Honestly, you think the wind has died down, and then you turn, and realise how hard it is still blowing! But at least it was only 1.5km to go. At this point I looked at my watch and realised that I had a chance to break 55 minutes, so I really dug in, and pictured my lovely run leader geeing me along, made sure I pumped my arms to help me keep going. I told myself I would try to speed up when my watch beeped for the 6 miles, but then I could not see the finish line (I was looking for an inflatable arch, which they have had in previous years, but I think maybe because of the wind they didn’t have it), so it was only when I saw the finish chute fence that I really sped up. 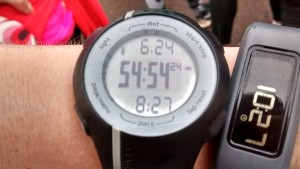 The finish area was very busy- I had to stop as soon as I crossed the line because of people being in front of me. We kept being told to keep moving, but there was no-where to go. I think this was the downside of the reversed course, but also we had to turn left around a van, collect our banana, water and medal, and then were out onto a narrow section of pavement. In previous years with the finish area going in the other direction it is much longer and so did not jam up. I was very excited to see my Garmin time, but had to wait ages (until the evening- the text result didn’t come through and the website would not load for ages) before I got my official chip time- 54.53! Wooohoo! A sub 55! 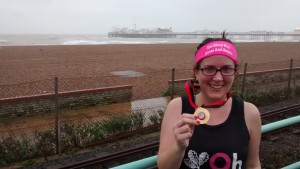 Andy took my photo (see how windy it is- the medal ribbon was flying everywhere and my ponytail was being flicked up behind me!) and then I put my top on over my vest. Then it started raining so we didn’t hang around, stopping to get a tea on the way back as we were both very cold. Andy was aiming for sub 50 and managed 48 something so it was pb’s all round! Not at all expected in that weather.

After a shower, we checked out and went to Bill’s for lunch, did a bit more shopping and the got the train home- listening to the radio 5 film podcast. 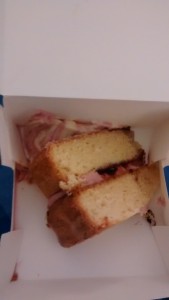 I bought a slice of bakewell cake for us to share in the evening, but the icing fell off on our journey home! It was still tasty!

Another successful running trip to Brighton, and my final race of the year (apart from virtual runner ones) finishing with a pb!

I am sure I will be back again another year! Are there races you do again and again? What did you get up to at the weekend?

12 thoughts on “Parkrun tourism, a windy weekend and a windy race!”