So as I have mentioned before, I am trying to imitate my long runs from last year in the build up to the Brighton half, as I felt good and strong during that race. I think often for a half I might go up to 11 miles in training, but do often struggle at around mile 8 or 9 (still too far for “just a parkrun left”), so running longer helped.

This past week didn’t have much running- I had a 5 mile club run on Tuesday, but then I had parents evenings on Wednesday and Thursday, and got a bit of a cold, then I had car troubles so had to go to the garage on Friday after work, so in the end just came home and relaxed. 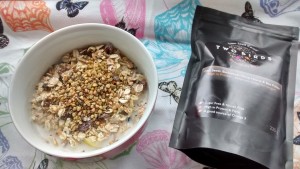 I have been sent this lovely cereal/ cereal topper, from Two Birds, so I enjoyed some for breakfast on Saturday, with an apple and muesli. It’s a mix of chia seeds, buckwheat, hemp hearts, bee pollen and cinnamon (they also do a berry one)- you can mix it with milk (like a sort of chia pudding), or have it as a topper. 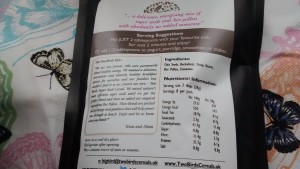 I love the cinnamon flavour and the chewy crunch that it adds to muesli.

On Saturday morning we had three house viewings booked, so I could not even parkrun, although we had a walk around town after, and I walked up to the shops later.

So Sunday came and I had not had much running, but I had planned a 14 mile run. My plan was to run out for 7, turn around and come home. I had a route in mind, but didn’t quite know where the 7 mile point would be.

After running out for nearly 7 miles, I realised I was quite close to one of the houses we had looked at, and I wanted to look at the driveway again as we were not sure it would park two cars, so I looked at maps on my phone and had a bit of a detour there (also getting lost because of not realising the map was upside down). This meant that I had done 8 miles before I started heading home again, and then my cold, which had gone, came back. I thought I knew a shortcut, although it had a bigger hill in it, but in fact looking at the map once I was home, it was no shorter, and in fact was possibly a bit longer. I had a pack of yo-yo’s with me, so at around mile 13 I walked for a bit while I ate them, and got up the energy to get home. I was so shattered when I got home, as I had ended up running over 15 miles! That may not sound like much more than what I was aiming for, but when you are running that far every mile counts. 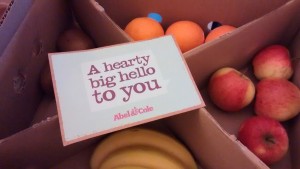 I found out earlier in that week that I had won a prize on Danni’s blog– porridge plus a fruit box delivery. The first fruit box arrived this Friday, and contained some blood oranges, so as soon as I got back on Sunday I had one of those- I needed something juicy right away and they fit the bill perfectly.

After a shower I had the energy to make some French toast, but pretty much felt wiped out for the rest of the day, and also really cold. It was so cold and even though I put on many layers I was shivering for a while. I did manage to make a cake (an easy one, using my food processor) this one -using more oranges (plain ones, not the blood ones) as I was seeing some friends on Monday and we needed a gluten free recipe. But that was about it. We went to tea at Andy’s parents house and his brother (who is a police officer) commented that he had seen me out running twice that morning, about 90 minutes apart! I think then I realised quite how far I had run!

So, two weeks until the half, and this weekend I don’t have to run quite as far! My legs were very sore on Monday and I did a fair bit of foam rolling, and had a bath with epsom salts, so they felt a bit better after that.

It did remind me that marathon training is just so tough- I could never be someone who runs several a year, or even one a year- I think half marathons are far enough for me right now. And on that note, I signed up to the inaugural Disneyland Paris half marathon today! I love the Run Disney medals, but the US ones are never in my school holidays, or they are the Sunday before school starts on Monday, leaving no time for a transatlantic flight, so having one in France is amazing! We had booked a hotel and train months ago, but today was the day bookings opened and we both managed to get a place- phew!

Which distance do you like to run the most? Do you plan your running routes or just head out? What sort of toppings do you like on cereal?