So this weekend my car was being serviced (over in St Albans) so when I booked the date I had offered to tail run, as I had to drop it off at 8.30am, a mile from the parkrun start. Perfect. I thought I would potter around in town after (partly why I thought I would tail run as I didn’t fancy wandering around town all sweaty) but it turned out my parents were back from holiday the day before, so Dad said he would do that parkrun, the drive me home for breakfast at theirs. Even better.

It was a rather sticky morning, and by the time I arrived at the start my glasses were fogging up from the warmth- not sure why that happens as they are fine when I run, but as soon as I stop they fog up. Anyway, I collected my fitbit tail runner vest (more like a dress, you’ll see) and chatted to one of the scanners who I work with. Then over her shoulder I saw my dad- they had been in Namibia for over 3 weeks (before our house move) so it was great to see him. My brother had also come along for the run, so we had a chat before the run started. There was another tail runner (tomorrow is the St Albans half marathon so I think they had a lot of offers for volunteers)- I quite like that, it’s happened at Panshanger before and means you can chat and not impose on the last few runners as some of them don’t like you hovering behind them.

There was a big turnout (343 runners) including this person wearing a full on lion costume (in support of the remain campaign). Much respect in that heat!

As we started it occurred to me that it was going to be a bit harder, because this route goes along the path to the lake, three laps of the lake, then back along the park. I’ve only even done it at Panshanger which is one big loop. Keeping track of the back runners would be more challenging. One guy told us he had MS and that if he overheated his legs would go numb, so we were not to worry if he was on the ground so long as he was talking. Another guy (who is one of the RD’s) was coming back from a knee operation so wanted to walk it in under 50 minutes. He thought he would be with us for the whole time, but in fact he went a long way ahead as there was a lady with her eight year old son (we learnt he was eight as she was shouting at him after a few hundred metres things like “you are so unfit for an 8 year old, you should be able to run more than 100m/ if you don’t do any exercise you’ll get fat… later someone heard her say “no pudding for a week”-  that poor boy is not going to have fond memories of running…)- he was struggling and kept stopping, so we had to stop a bit of a way back because it was a little awkward.

We chatted to the marshals briefly on our way past (it was strange thinking “we will see you twice more”)- one guy was great and cheered on “the fitbits” each time we walked past!

On our first lap my dad and brother went past on their second (or possibly third). I did think then that perhaps a one lap course has advantages. It was nice to look around the lake and see a stream of runners, but as we started our second most of the runners were peeling off for the home straight. On the second lap we came across the guy with MS, who was sat down. He was worried he was at the back, but we reassured him we were only on our second, and soon after he overtook us and headed to the finish. Then the lady and her son decided to stop, so then we had to find the next final runner- he was right at the other end of the lake so in our final lap we had a bit of a speedy run to catch him up. We walked the rest of the way together, and he was very pleased to finish with 49.08- well under his 50 minute target. 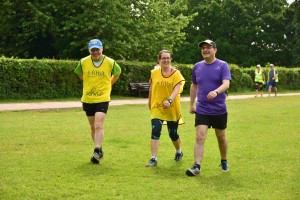 See! Look at my vest- more like a dress!

After that we headed home for pancakes cooked by my mum (Andy drove around to meet us there), and a look at their amazing safari photos before I went to collect my car.

I was having a look and the last time I ran at St Albans was March 2015, when I was marathon training- Dad picked me up, we ran parkrun and then I ran home from there. It was the first parkrun I did, and it was my only one until Panshanger started up, so it was good to go back there. I think I should go in the autumn sometime and see if I can get close to my pb, as it is a faster course, but most weeks my local ones are going to win out I think.

(That was run number 71 for me, 21st time of volunteering)

Did you like exercising when you were a child? Do you have a junior parkrun near you? Apparently there is a group of people keen to set one up, but because of all the parks being used for football on Sunday mornings they are finding it hard to find a suitable location.

4 thoughts on “Tail running around the lake”