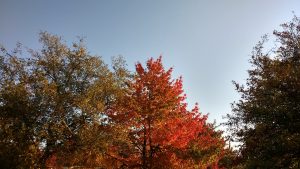 Or why walking in the autumn is brilliant.

I’ve been on a fair few runs over the past few weeks- I’ve only managed 3 per week instead of 4 because of various work things getting in the way.  (On a side note, I am quite relieved that I didn’t sign up for 100 miles this month, because for a couple of weeks I have come home on a Thursday totally exhausted, with work still to do, and so have had a gentle walk instead of a run- this is for overall balance of health). I’m also getting way behind with my podcasts because I have been running races or club runs on Sundays, and then I’ve missed my Thursday solo runs, and I don’t listen to podcasts at parkrun or on Tuesday club runs. Anyway, the runs I have managed have been fantastic.

Autumn seems to be coming much later at the moment- I remember years ago always going to see a fireworks show and being absolutely freezing, wrapped in so many layers with massive hats, gloves, scarves on. Now, yes it’s a bit chilly first thing, but it’s nowhere near as cold. So many trees are still green, and lots of them have only just started changing colour in the last few weeks. 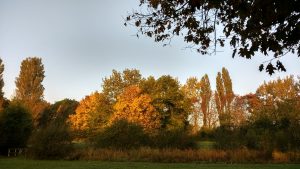 I listened to a Marathon Talk interview on one of my runs, with Ian Corless (who hosts the Talk Ultra)- and I think I am an ultra runner in the disguise of a (mainly) half marathon runner. Why? Well, I just enjoy the process of running. Yes, sometimes I aim for a faster time (I had that sub 2 hour half on my radar since I started doing half marathons) but actually, I normally run because I actually like it. This may be no big revelation, but recently I am coming across more people who see running as a necessary evil- I’ve even been called the duracell bunny by some of my club members (in a nice way) because I keep on going and am “always” running. It’s hard to explain to people who don’t feel the same way, but I just really do love running, and so I think 3 or 4 runs per week is a reasonable amount of running to fit in. 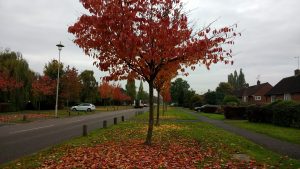 Even on a grey day, the colours are just beautiful. I could have stopped every few metres on my run the other way as I just saw so many stunning trees, in so many shades of red, orange and gold.

I also find running in the heat of the summer very tough, so when it is a bit cooler (but not freezing- I don’t like slippery pavements and chillblains) running is even more of a pleasure. The air is fresher, and you can easily wear an extra layer to begin with, and tie it around your waist later on if you get too hot. 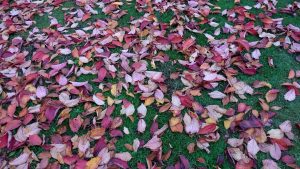 There is the dog poo danger though- who knows what’s lurking beneath the leaves???

Plus, coming home for a hot shower and hot cup of tea is a lovely reward. 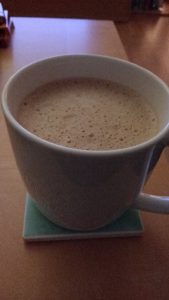 (Or a hot chocolate.)

On Sunday morning I headed out to meet some of our club- the club were raising money for a local breast cancer care charity, and the fountain in Welwyn Garden City is always coloured pink during October for breast cancer awareness month. So the club had planned a pink run, and were donating money for each member who ran (and if you could not make the Sunday run, they asked for photos of people running at other times in the week, dressed in pink). As they were running from Hatfield I met them half way (and was given a tutu then)- as I was leaving the house I met my neighbour who was off to the gym, and had to explain why I was dressed head to toe in pink! In for a penny…

Anyway, we ran into the centre of Welwyn (lots of cars beeping at us on our way!) and were met by some club members who gave us a piece of pink cake to eat, before we posed for some photos in front of the fountain before running home. We posed as if we were checking for lumps, in the theme of breast cancer awareness. The club posted a message later saying they had donated £85, which isn’t bad for a little club. 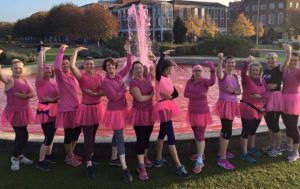 Onto the cake baking! I tend to make cakes if we are going to Andy’s family for Sunday tea, and as we have been away for a few weekends it’s been less regular.

A few weeks ago I made a lemon cake (while singing along to Muppets Most Wanted soundtrack). 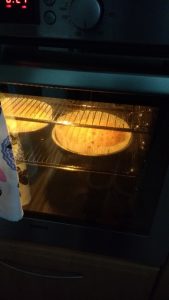 I filled it with some cream cheese icing- very delicious. 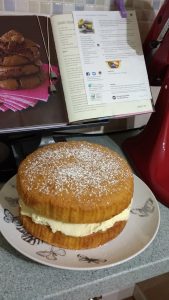 More recently I made some lemon cupcakes and hazelnut brownies. Andy’s brothers and wives were coming over, so I used my cake stands- I think it might actually be the first time I have ever used the three tiered cake stand (don’t worry, I washed it when I got it out of the cupboard). 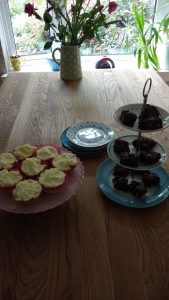 We had to send them home with a bag of goodies too, as I did make rather a lot.

My favourite half term job (hooray for half term) is making Christmas cakes. Last year I think I had a bit of a problem fitting them in the mixing bowl (as I usually make a double batch as I make cakes for our families), but I have made them in two lots this year which has worked so much better. 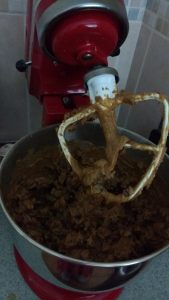 They smell so good when they are baking- it makes the house feel all cosy.

Finally, I made a toffee apple gingerbread cake (for this Sunday’s tea)- it was amazing. It’s from the CCC book Year of Cake- basically you cooked slices of apple (from our apple tree) in some butter and sugar, and then put them in the bottom of the cake tin. You then made a gingerbread cake mixture, and poured that over the top. Leave it for a few days makes the flavours get even stronger, so I enjoyed a leftover slice this week. You might just see a bit of apple peeping out of the bottom of the cake. 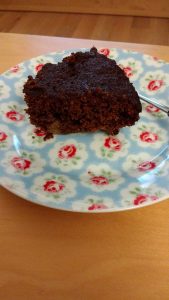 Finally, (not to do with running or baking) Snow Fairy is back! I went into Lush to get some shampoo and was so excited to see the pink display! I love how this shower gel smells, so that (here we go, it can link) can mean I look forward to my post-run shower even more (yes, I linked it!). 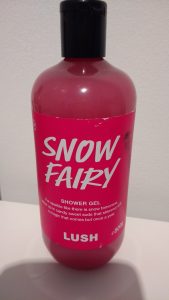 Are you a fan of autumn running? What is your favourite soundtrack? Are there certain things that you associate with this time of year? Snow Fairy and Strictly being on the TV signal that soon we can mention the C word…