Who would have thought it? One of the least flexible people ever actually enjoying a yoga class. 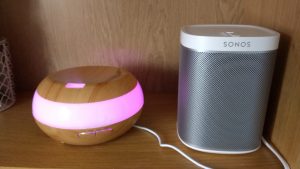 I have been trying very hard to relax more (is that an oxymoron?). Work just always seems so busy, and there is always something that can be done, so it can feel hard to switch off. I recently bought a diffuser (I had some amazon vouchers) as I’ve been going to have a massage around once a month (more attempting to relax, although last time she asked how I was, and I said I thought I was less tense, and after about 5 minutes she said to me “do you think you were just kidding yourself?”- they can be fairly painful at times as she tries to sort out my back and shoulders…) and in the room she always has on a diffuser and it is just so lovely. I like scented candles but I am not always sure about burning them- I try to get more natural ones but also I worry if I wander out of the room for a bit they might set something alight. So anyway this seemed a good option, and so far it’s fab. Yoga has been another angle- I love running but at times it just adds to me feeling of being rushed- I get annoyed in traffic driving home that I’ll be late for my run, I hurry through the door, get changed as quickly as possible and then head out again- rush rush rush!

I’ve been going each week since some time in October, and it is so fantastic. It seems that all yoga classes are different, and as I have always found with fitness classes, the instructor can make it or break it. Luckily, I think the lady (Josie) who does the yoga class is brilliant.

I was so nervous about the first class, imagining all of these super slim and flexible lululemon models with their long limbs and weird bendy poses.  Someone else from my running club said they would be there and meet me, so at least it wasn’t all unknown. I didn’t even realise I would need bare feet and arrived in my trainers!  There’s a mixture of people (men and women)- some very experienced, and some closer to my level, and everything is adjusted for the different needs. Anyway, the class tends to go like this (and please excuse my names for the moves/ poses- I’ve not got a clue!):

We have a gentle warm up, do some breathing and also say (sing?) some oms. I was not expecting this,  but it’s very calming and helps to focus on the breathing.

Each class has a different focus- it might be twists, back bends, hips- and so then we move through a range of postures. Now I have been going a few weeks, I am getting the hang of some of them (we often go back to the downward dog between other movements). Sometimes we hold poses for a long time (the pigeon pose, which we have done several times but I still would not be able to do it without instruction and a block), and sometimes we move fairly quickly between different poses, not really stopping at all. It gets quite sweaty!

I find it brilliant for strength, which is good as I have now stopped going to Body Pump, and needed something to replace it. I do ache a lot the next day. It’s also brilliant for a challenge- the last couple of weeks we have practised a tripod headstand- last week with help I managed to get my legs onto my arms, and this week I managed it by myself, which felt amazing. I’ve a long way to go before I could imagine putting my feet up into the air, but it’s something to build on each week. We also did what I called a bridge (from when I used to do gymnastics as a child)- again I needed a little bit of support to push up as my arms aren’t that strong, but I was impressed that my back bent that way.  It’s very encouraging- when we were doing the headstands one of the ladies cheered me on, and then had a go herself- before she had only managed one leg or the other. We then congratulated another person who managed to hold the pose with their legs up. This is where I can get to in my headstand now! Image from YogaDownload.com

Josie the instructor comes around and gently adjusts everyone if they need it, and she has foam blocks and little cork bricks to help with different poses (I can’t even get my forehead to the floor in the child’s pose, so I use the block for that), but I never feel self conscious about not being able to do something as well as some of the others.  Some weeks we have worked with a partner for some of the poses- we did a paired downward dog once which I cannot even begin to describe, but as I was not confident on my upper body strength I was in the normal pose with the instructor resting on me. As always though, if you are not confident in trying something, Josie will adapt it or give you something else to do (or be your partner).

The class finishes with a lovely cool down- gentle stretches, poses held for longer. The lights are dimmed, a candle is lit, we can have a blanket to lay under, and this part is just total bliss. I think last week I just about drifted off. Sometimes we sit in a circle and look at a candle, and then close our eyes and picture the candle. This may sound strange but I often don’t sleep well, and since then I have tried to picture the flame when I am awake in the middle of the night. I think it helps.

Josie also had some lovely geranium oil which she dabs onto your forehead as you lay there. It’s such a lovely feeling, and for me, just what I need. I can’t be thinking about work when I am there as I need to concentrate on the moves, I like the strength and flexibility side of things, but the cool down at the end is so comforting- I always feel fantastic afterwards. Very tired, but in a calm way.

It’s funny how my opinion has changed- I thought I should do it because it would be good for me, but I actually enjoy it a lot more than I thought I would, which is even better. Before I really thought about yoga in a physical sense (it will be good for flexibility) whereas now I see it has more of a holistic approach.

Have you ever been surprised by something you didn’t think you would like?