So after my visit to Swindon parkrun and a quick breakfast in the hotel, we drove to one of the Bath park and rides. It was totally chock-full when we arrived, and people had begun making up spaces. Luckily I had driven as I only have a small car- I manage to squeeze on the kerb behind some other cars- Andy’s car would not have fitted.

The town centre was of course packed (it being a Saturday), so we had a little wander, got some lunch and sat in the park to escape the crowds. 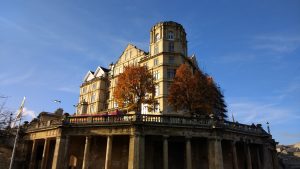 It was a totally gorgeous day in Bath (as it had been fairly cloudy in Swindon)- blues skies and cold crisp air. 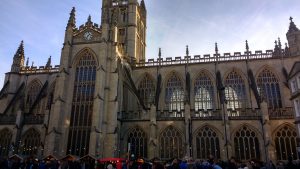 We have been to the Bath markets for the last few years (three maybe) and it’s just so nice to wander- there are markets at the bottom of the cathedral, in a square, all along little side streets. What I love the most is that they have a lot of local products- West Country chocolates, beers, cheeses, chutneys and so on. Some markets I have been to just have the generic decorations and then a mulled wine stand, but there are so many individual ones. I didn’t take a photo but there was the most amazing stall with forged metal products like a stand for logs (if you had a wood burner- one day…) and all the fire-poking rods.

I had looked at a few things, but didn’t want to buy anything until later as we were going to the spa, so I didn’t want to have shopping bags to cram into the locker along with my clothes.

Last year when we left the spa, the queue was huge, and this year, when we arrived, it said it was a 45 minute wait- we think all the people who came last year later decided to come earlier.  I don’t think it was that long in the end- luckily as everyone has a time to leave by, the queue kept moving. 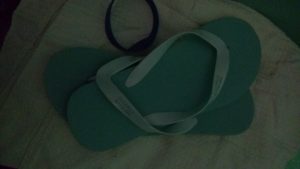 You used to get slippers to wear, but now you get flip flops. The band is for the locker, and if you buy anything you scan that and pay at the end.

We had a couple of hours relaxing in the big pool  and going into the different steam rooms, although I am not good at staying in them for very long as I find it hard to breathe when the air is that hot. 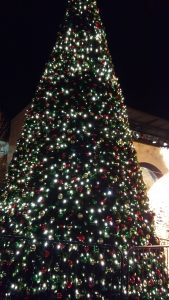 After leaving we had a little wander around the shops, went for dinner, and then went around the markets when they were much quieter. I even bought a few presents (including some amazing chai syrup for a friend who loves chai lattes as much as me). We then got the park and ride back, and drove home, getting back at about 11.30.

Previously we have stayed down there for the Saturday night too, but actually we don’t tend to go back into Bath on the Sunday, plus Sunday traffic is way worse, so it works out well this way as we have some time at home at the weekend too.

Have you started any Christmas shopping? What do you like about Christmas markets? Are you a fan of steam rooms?