A while back, in a moment of madness/ enthusiasm, I signed up for a 10 mile race for the day after Boxing day. Originally I knew a few people who would be running it, but one of them gave her place away (this was allowed by the organisers) and then one of them wasn’t well. It didn’t start until 10.30am, and on Boxing Day evening I was tempted just to go on a run by myself from home instead, and give up the medal.

However, I got a message on Tuesday morning from the friend who was ill, saying she was meant to be driving someone else there (an OH lady runner), and would I give her a lift, so that made my decision for me.

I’d never been to Buntingford before, but it wasn’t hard to find (with a satnav) and the parking was just down the road from the race HQ (a college/ school)- this meant we could wait inside before it started as it was cold and frosty. It also meant real toilets, as I pretty much refuse to use port-a-loos.

The race start was a short walk from the HQ, and at 10.30 on the dot a horn went off and everyone started running. The route started off with a mile loop around the town, back to the start again, before heading off into the countryside. It was very cold, and there were plenty of marshals out shouting to warn everyone of the slippery patches on the pavements. I was only doing the race for the miles, and had no expectations of a fast time, particularly as I had run several long runs in the previous week.  I had also heard it was fairly undulating, so wasn’t expecting much. We made arrangements to meet at the finish as I was setting off much slower.

There was one big hill at around 4 miles, and I heard some people saying that it was the worst one, so I was glad that was over. I had started off steadily, and decided to pick up the pace for the second half.

There were still a few hills in the second half, but they weren’t as bad (not as steep or as long) so I managed a few miles beginning with 9. I saw the 8 mile marker and just felt tired and a bit hungry, but then I heard a clock chiming for midday – I would not normally run that late in the morning, and although I’d had some toast for breakfast, it was at around 8am as I had to allow time to drive there (and the car park closed at 10am, so we had to be there before then).

I was glad to reach the finish line- 1.41.07- not bad for a hilly course. I’m glad I did it, as it was a pretty route, mainly through lovely countryside, and lots of cheerful marshals the whole way around. 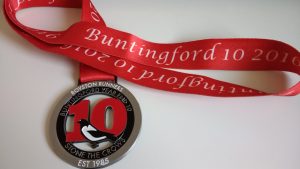 The medal is a good one too- very chunky, and I like the bird on it (although I am pretty sure it’s a magpie, even though it says “Stone the crows” on it- no idea why…).

After dropping the other runner off, I was going to head straight home, but then this happened: 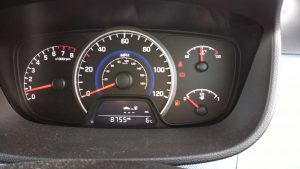 Photo taken while I was in the petrol queue, don’t worry I didn’t take it while driving…

The light had come on for my petrol, and it had said I had 40 miles left, but then as I was driving towards home, the dial dropped below zero and the number of miles left went blank- this totally panicked me. I never leave the petrol this low (I was going to get some on the way back from my Auntie’s on Boxing Day but we left a bit later than planned so I didn’t have time). Luckily we have a Morrison’s around the corner so I drove there, keeping my fingers crossed that it would not suddenly stop. Thankfully I made it, although the person in front of me spent ages faffing about after filling their tank up, and I was hoping I would not have to push my car the final few metres!

It was all good thankfully, and I got home feeling pretty tired and a headache suddenly came on, although I realised that as we jumped in the car pretty soon after finishing, I’d only had a few sips of water since breakfast.

After a shower and lunch, we walked into town to meet Andy’s parents to see the new Star Wars film- a nice treat to sit down after all that running.

I enjoyed it (Andy had already seen it once), but when we got home we had messages from his brothers saying their families were ill with stomach bugs. I felt totally shattered, but could not decide if this was because I was ill, or if I was just tired from all the running. Anyway, the next morning I was ill- this was rubbish timing as we were having our new bed delivered that morning, so when all I wanted to do was lay in bed, I had to get up as Andy had to take the old one apart. I ended up basically dozing on the sofa all day, and by the evening managed to have one piece of toast. 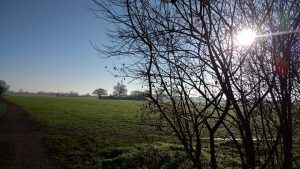 On Thursday morning I felt a bit better, after sleeping for 12 hours, and headed out on a walk in the frosty sunshine to get some fresh air. 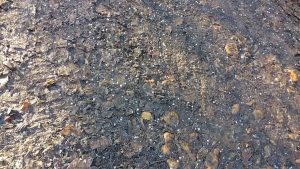 All over the floor were little balls of ice, like hail- at first I thought they were bits of grit, but I think there was ice on the trees, and when a bit melted the balls fell to the ground. It was very pretty anyway.

I was meant to be running my final 3 miles on Thursday (or Friday) but I felt so tired I didn’t think it would be a good idea. Plus I had not eaten much (yesterday I had one bit of toast for breakfast, one for lunch and a little bit of pasta for dinner). Today (Friday) I had an opticians appointment so I walked into town. I am planning on doing parkrun tomorrow, so hopefully I will get my final 3 miles then to get to my 1000 mile total. Fingers crossed.

Do you like running routes that you know? I think sometimes it is an advantage, but also I could not worry about any hills as I didn’t know they were coming. How late do you leave it to fill up with petrol? I used to only go just below half, but my car now tells me ho many miles (approx) there are left, so I tend to leave it until I have about 80 miles left.