To achieving all of the Hertfordshire parkruns that is.

I think it was last year that I decided to try and run all of the Hertfordshire parkruns, and often Dad has accompanied me. So far as well as our home runs of St Albans, Panshanger and Ellenbrook fields, we have managed to run together at Tring, Aldenham, Rickmansworth and Stevenage, have run Gadebridge on separate days, and I have been to Barclay on my own. This only left two- Cassiobury and South Oxhey, both in Watford. As I am away for the next couple of weekends, we decided to tick one more off. I was given the choice as I would be driving, so I went for South Oxhey as it seemed easier to park and tended to have a smaller field of runners- perhaps less congested and maybe a higher placing for us.

I picked up Dad and Tony just after 8am, and we arrived at 8.30 with plenty of time, so we sat in the car park and chatted for a while before deciding we should head out just in case the start was a bit further away. We needn’t have worried as the parking is in a pub car park and the start was just behind the building. We had a wonderful welcome from the RD (Michelle) who seemed to know everyone else by name. 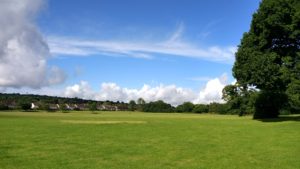 I’d put a few old towels in the boot in case it was raining, but thankfully we were greeted with blue skies for the  duration of the run.

There were a few other tourists so we had the usual briefing (3 laps of the park, including a hill hidden behind some trees) and then the main briefing, where we were all mentioned to the rest of the runners. One runnr (Evelyn) was running her 50th and so had brought along cookies and watermelon slices for the finish. Just before the start a PCSO turned up with a lady and her guide-dog- I recognised her from the parkrun volunteers evening as she had been on the stage with one of her guide runners speaking about it. Someone had been blocking her route so she had called the police to help her, but it did cause us a little bit of a wry smile because everyone we had mentioned this to had said about how rough the area is, so having the police there only added to the stereotype. 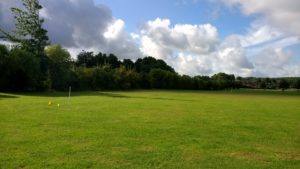 We walked to the start, a little way down the field past the finish area, and then we were off.  The route was very simple- 3 laps of the park, although the other side of the park was obscured by trees so you could not see the hill. 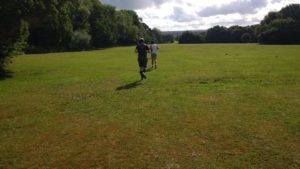 We were told to look up when we got to the top of the hill- the views were lovely and so green- I took a few photos while running and they didn’t even come out blurry!

We kept it fairly steady and by the third lap the hill was feeling more painful. We chatted to another tourist (she was in Watford for a work do) and encouraged her to try and catch us up when she stopped for a little walk break. 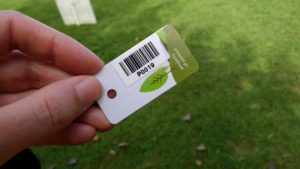 I didn’t look at my watch while I was running (although I managed to work it just fine and felt it vibrate and beep after each mile), so I was very pleased to see a royal flush negative split (9.34, 9.17, 8.58, 8.03) and position 19! A top 20 finish is a rare thing! Even if there were only 38 runners in total! I was third lady and also first in my age category- again that doesn’t happen often for me!

We all enjoyed a piece of watermelon before getting our tokens scanned. The lady with the visual impairment was barcode scanning, so we were asked to make sure we handed our personal ones first as she wouldn’t be able to see which way around we were giving them.

We were tempted by the coffee van, and had another chat with the RD and also one of the other tourists, but Mum had promised pancakes so we headed back after a quick photo. 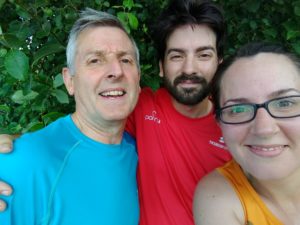 So, why one step forward and two steps back? Well, today was the first Westmill parkrun, close to Ware, and next weekend Heartwood Forest parkrun (between Sandridge and St Albans) begins, so I now have three more than need doing!

This year my parkrun aims were to do my 100th parkrun, and get on the UK most events table (you get on there once you have run at 20 different UK events). Of course the eventual aim is for 100 different events but that is going to take years, so to keep me busy I am looking at different sets. The Hertfordshire set is the first one that I thought of, but I have seen people chasing the alphabet. I’ve also been listening to the parkrun adventurers podcast (based in Australia)- they have all sorts of cool sets like a pirate (seven C’s and one R), a statesman (which is either one of each state, or all of the parkruns in one state, I can’t remember). I’ve seen compass ones (most northerly/southerly/easterly and westerly parkruns).

Are you interested in any parkrun challenges? Have you completed any or are you aiming for anything? Do areas near you have a bad reputation?  South Oxhey parkrun was so lovely and welcoming, and had a real community feel, and weirdly it’s so close to Cassiobury where they get 300+runners. I do wonder if they had a different name, more people might go to it?