Last weekend I realised that it wasn’t long before I would be running 10 miles in Brighton for the Bright10- one of my favourite races- I love 10 miles as a distance and I don’t need an excuse to go to Brighton! Due to one thing and another, I hadn’t managed a long run in a few weeks so I knew I needed to go a fair way on Sunday. It was a bit damp but not too cold when I set out. I was planning 9 miles so checked my Strava to see the last route I did, because I still don’t really have the hang of the longer routes. 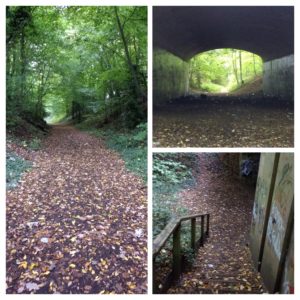 At one point I join an old railway line- you can join it further up but it’s easier to go down these stairs which then join the path next to a tunnel- although the tunnel is horrible and full of rubbish and graffiti- it always makes me think of Its Always Sunny in Philadelphia as they have a bit of a think about “bridge people”. Thankfully I don’t need to run through the tunnel as my route takes me left and away from it. 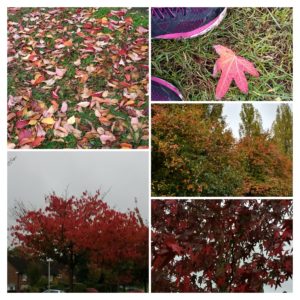 I was enjoying the autumn colours and taking some photos when it started to rain quite hard- I was still about 4 miles from home so I tried to pick up the pace a bit. 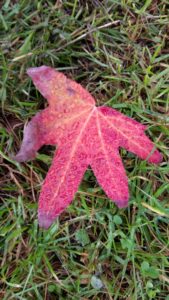 Anyway, home for a very hot shower and then breakfast. 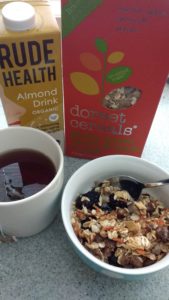 There are blackberries buried under the muesli- very tasty.

Then I did some work, walked into town and got my free drink (went for a green tea latte this time) and did a bit of baking (coming up later) and some pottering in the garden. All very lovely.

On Monday we went to see Wind River, which was a film based on true events about a girl being murdered on a native reservation in the US (well, about trying to solve it and catch the people who did it)- it was a bit like a long episode of Longmire if you have ever watched that. Very gripping but a few things made me jump. I didn’t seem to be on in many cinemas but it’s worth hunting out if you like that sort of thing.

On Tuesday my run was rather rudely cut short. I’d got home too late for the club run, so went out on my own. I was planning 5 miles but 2 miles in I felt a ping on my shoulder- yes, my bra strap had broken*.

I could cut the run shorter by running the 2 miles home, but I had to basically run holding my arms across my chest- and I’d had a bad shoulder from Sunday (from probably doing work on my laptop on the sofa instead of in my office) so that didn’t help matters at all.

*It had in fact not broken, but worked its way loose, which was just as annoying as I could not fix it whilst running.

It does seem to be a flaw of the shock absorber run design that the bits that you adjust to make the straps the right length are only held in place by a small plastic hook- in some of my old bras I had actually sewn them in to stop it happening, but I have lapsed recently.

Coincidentally the next day Andy recommended this podcast episode for me (which was very interesting- about how the sports bra was invented).  I hadn’t even heard of a sports bra until I was in my twenties and read a few fitness magazines when I had joined a gym- no wonder I wasn’t keen on running at school as it’s very uncomfortable without one.

Yoga on Wednesday went some way to helping my shoulder- we did lots of twists and used the straps to get into poses more deeply, although we also did a lot of the warrior ones so my legs were a bit jellified after!

On Thursday I had a bit of a headache so just did 4 miles again (no malfunctions this time) and then on Friday after work I had a back massage to sort out my shoulder.  It was a bit painful at times, but the fact that after I finish I can actually move my shoulders and look over my left shoulder again is so worth it. And most of it is relaxing with some lovely scented oils in a diffuser and some zen like music/sounds going on. 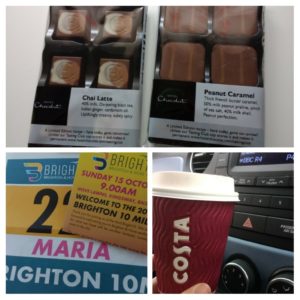 I felt quite thirsty after so I wandered into town to get a drink- my phone is on Three and there is an app for customers with little deals and offers- there was a free Costa drink so I got one there. I had to get a few boring bits, and then went into Hotel Chocolat- they had chai latte chocolates, so of course I had to get some. When I got home my 10 mile number had arrived.

Then I was off out for bowling and dinner as a work social.

When did you first learn about sports bras? Do they mention them in secondary school PE kits I wonder? Do you have any routes with parts that you don’t like? On our club runs we sometimes go through some dodgy underpasses- I wouldn’t run them alone that’s for sure.