So as I mentioned before, on Friday night (a week ago) I was off out with work. We went for dinner at Frankie and Benny’s- not somewhere I would choose (I’ve been to one twice before- we complained the first time as the service was so poor, and were given vouchers, and on the second visit we had to give the vouchers in straight away, and the service was still awful, and all the fried food isn’t really my favourite) but I had a nice wrap with goats cheese and avocado (at 9.35 I might add- our table was booked for 8- so service still ridiculously slow) and then a peanut butter cheesecake for dessert.

On Saturday I was off to Ellenbrook Fields to celebrate parkrun’s 13th birthday! I was meant to be doing the new runners briefing, and had my sign and clipboard (and spoke to a few people informally about it as they had seen the sign)- anyway we then had to do a group photo of everyone in their apricot tops, and then the RD told me that there wasn’t time for the briefing any more. I went back to speak to the couple of people who had come up to me before, and another person came over so we had a sort of whispered briefing while the volunteers were being clapped. I felt like a bit of a fraud getting my thank you text later. 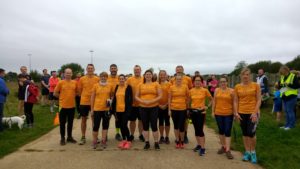 Here we all are on the start line!

Dad had cycled there and I managed to find him at the start just before it began. He was back from his huge cycle ride through Spain, and said as he hadn’t run since before he went he would see how he got on. We were chatting and catching up with life from the past two weeks, and enjoying the run. I am sure I have said it before but I love the Ellenbrook course as you do a little loop and a big loop, and when you finish the little loop you run past the RD, timers, token scanners etc so there are always lots of cheers and friendly faces.

Anyway, I didn’t feel like we were going too fast (and I never look at my Garmin) and as we neared the end Dad decided to go for a sprint finish- I knew I couldn’t keep up with him for that bit so I said I’d see him at the end. My watch beeped for the 3rd mile and I glanced at it, seeing 8.38 on the screen. “Hmm, that’s quite fast” I thought, and then saw 26 something on the watch. My pb is 26.33 at Ellenbrook and 26.29 all-time, so I put in a bit of a sprint for the final bit. 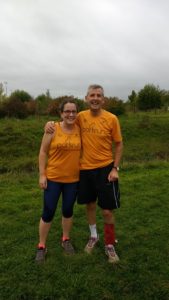 I got token 73, which seemed high for me, but I didn’t know my exact time until I got the text- 26.38! It’s my third fastest time ever, and I didn’t really feel like I was beyond myself until that final sprint. All my miles began with 8’s too (I think they would have to for that time I suppose)- 8.45, 8.42, 8.38- pretty close splits as I often have a much bigger difference between my first and last mile time.

One day I will actually aim for a pb but I was happy to enjoy the run with Dad. Perhaps peanut butter cheesecake is the key to a faster run? 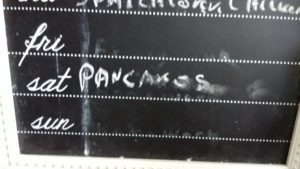 I then drove home while Dad cycled, and we enjoyed a lovely breakfast. My brother (who didn’t run as he was playing football later) joined us, as did my sister, her husband and their baby. Mum has one of those chalk boards in the kitchen- I did love that she had written pancakes on it so we knew what we would be having!

We also had an email from my dad’s cousin Brian (we ran with him in Milton Keynes)- he has been loving parkrun and did his 21st run on their birthday, getting a pb too! We are trying to arrange for him to come down to us and run at Ellenbrook so he can be introduced to parkrun tourism.

After a very leisurely breakfast (which included us booking tickets to see Joe Lycett – he always has the funniest names for his tours- this one is “I’m about to lose control and I think Joe Lycett”) I headed home and had to spend several hours doing some work. Later I needed to stretch my legs so we walked the longer way to town, got our free drinks from Starbucks and then walked home, where I spent a couple more hours working. I did have an incentive as we’d decided to go to Wimpole hall (National Trust with lovely grounds) on the Sunday so long as I didn’t have much work left.

Did you celebrate parkrun’s birthday?