Last Saturday, after Thetford parkrun, we headed off to a couple of National Trust places in Norfolk. 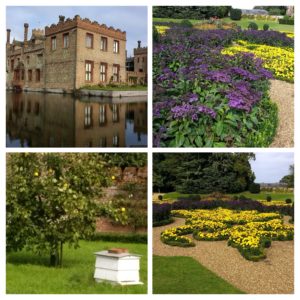 First up was Oxburgh Hall, where we had a look inside the building, went up the spiral staircase to the roof, wandered around the gardens and enjoyed a hot chocolate in the cafe. Then we headed to Blickling which had an RAF museum (as it was an air base in WW2), and lovely large grounds to walk around. We knew we would be heading to The Waffle House early in the evening, so we shared a sandwich in one of the tea rooms for lunch. 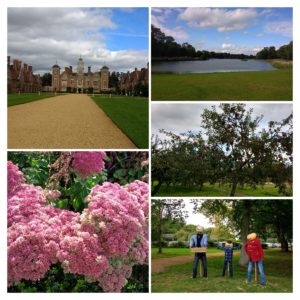 By late afternoon we were ready to head to Norwich (where Bush were playing later)- we had a little wander around the shops but I had a headache and didn’t feel great (probably not had enough to drink in the day) so we mainly sat outside in the fresh air with a cold drink, before heading to dinner.

As you may well know, I do love to go to The Waffle House in St Albans. The original is in Norwich, and personally I think it’s better, as it has a bigger range on the menu, plus you can have small or large sizes. I love both the savoury and sweet waffles, but having two is a bit much so I have to choose each time (tough choices). I’d explained to Andy that we would be sharing a sweet, and so in the end we both went for the small for our mains (still a perfectly good portion size). 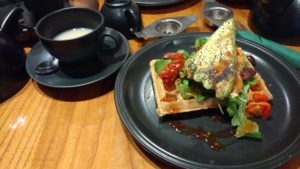 I went for my favourite- the hummus and avocado- the one in Norwich was slightly different as it had sundried (not cherry) tomatoes and was sprinkled with poppy seeds. It was so good. Andy had a bolognese one which wasn’t on the St Albans menu- good to try something new. 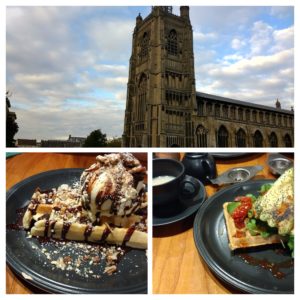 We decided to have a dessert that we couldn’t get in the St Albans one, so we opted for a waffle with mixed nuts baked into the waffle and sprinkled over the top, with chocolate sauce and then added a scoop of ice cream (meant to be pistachio but they had run out so we had vanilla). It was so good.

Then we were off to see Bush- we had a slight fail here as we thought they would be on stage at 9 (this is the normal time for London gigs)- we turned up just after 8 thinking it was the support band playing, only to realise Bush were already on! Whoops! It was a great gig though, in a very small venue so we were really close to the front without being squashed by anyone. The bonus was that it ended earlier, and as we had a two hour drive to get home this was no bad thing.

On Sunday we went to Crews Hill to get some bargain plants for our garden (including a little crab apple tree for £3!). We were meeting Andy’s parents there and I’d woken up too late for a run before, so when we got home I headed out, but it was hot and I was hungry as I hadn’t had lunch, so I didn’t manage to go as far as I had originally planned. Andy spent the time putting most of the plants in the garden (I think I planted one when I got back). 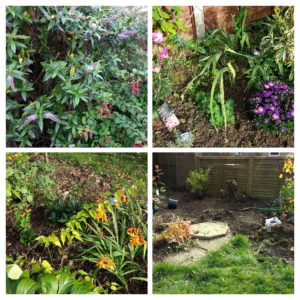 Bottom right is where the huge patch of weeds was- the one I started tackling a few weeks ago- so nice to have some plants in there now instead of five foot tall thistles!

Are you often late for things? I hate being late but I also often underestimate the amount of time it takes me to do things (e.g. dry my hair) so I often end up rushing and feeling stressed. Do you often have a dessert if you go out for a meal? Although I have a sweet tooth, I find that often desserts are the most disappointing as they are from the freezer, and Andy would usually rather share a starter (plus if I order something like a brownie I will then feel like I could have made a nicer one myself and for less money). The main exception is The Pudding Stop in St Albans which makes the most amazing puddings (the clue is in the name)- you can go somewhere else for a meal and then head over for the pudding= perfect.

4 thoughts on “A Waffle House trip! And other weekend tales”