On Saturday we had tickets to see Bush play in Norwich, so we had booked a hotel in Thetford for the Friday night, with the aim of going to some National Trust places on Saturday before heading up to Norwich for the evening. Handily the Premier Inn in Thetford is just under a mile from the start of Thetford parkrun, so my decision was made!

After a slight google maps based hiccup (telling me to turn left into London road when the street sign said Norwich road) I arrived at the meeting point (in the drizzle). At first only a few people were milling about but I think they were all waiting for the last possible moment to get out of their cars and brave the rain! 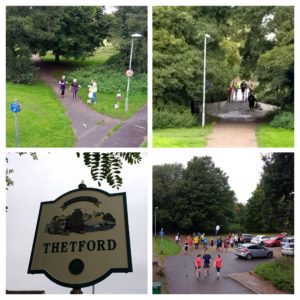 Clockwise from top left- the jelly baby corner, one of the bridges, the car park meeting place, and the sign for the town.

There was a new runner briefing and they even had a big A2 laminated map of the course- it looks pretty complicated but in reality it was well-marshaled and I didn’t go wrong once!

We did a slightly altered route due to travellers camping on part of the normal route. We walked a little way to the start from the meeting point, and then it was a bit like the shape of clover (3 leaves meeting in the middle) as there were 3 sections of the course, and you ran each section twice before moving on to the next section, with a little bit added on to take you to the finish area. I was pondering this as I ran- I was lapped during my first lap of the second section, but other than that I didn’t see any front runners. I think I went past the tail walker on my second lap of the second part, but it was never too congested.

As it was a town centre park, I didn’t know what to expect, but it was really pretty. The route went through parks filled with trees, and alongside a river. At one point someone warned me of a hill at the end, but in reality it was a slope leading up to a bridge- it had a marshal dressed as the Honey Monster (I think – he had a big yellow fluffy head..) cheering everyone up the hill. On my second lap of the loop I tried to take a photo while I was running but I took it too early so when I looked at them later you couldn’t really see him. 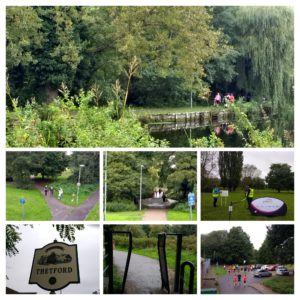 At a couple of points the course narrowed (middle bottom photo) as you had to pass through metal gate things, but everyone was very courteous and friendly and as it wasn’t a really busy one it wasn’t an issue. I briefly stopped once as I was not sure whether I needed to repeat a section, but the marshals were great at saying “if you’ve only run over the bridge once, repeat this loop” to all of the runners so I realised as I slowed that I needed to go around again.

It was a super flat course, and it turned out that I managed my fastest parkrun time since May (28.22) with a nice negative split too- always nice to manage a final mile beginning with an 8.  The marshals were brilliant- I feel like I say this about all of the parkruns (doing a Brucie- “you’re my favourites”) but they were honestly just fantastic. There seemed to be lots of them too- I think maybe the nature of the course meant that you passed the same people a few times, and also the timekeepers and RD could be in the middle seeing the runners, so you passed a bit more of a crowd at times. The honey monster marshal was brilliant, they have a jelly baby corner (I’d seen a plea on their facebook page for a top up as it was running low) and this week it was manned by a lady and her daughter, and then at one point there were maybe three marshals all in a row singing “if you’re happy and you know it give us a wave” and various versions of the song. I passed them twice and they didn’t let up once- very enthusiastic!

When I finished, I then realised that the barcode scanning was taking place back at the little car park where everyone had first met. I think it was because of the rain (possibly they didn’t want to move all of the kit)- this did seem like risky business and I was very paranoid on the little walk back that I would lose my token! 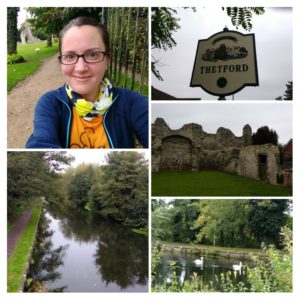 After being scanned (and being told very helpfully by the person my token number in case I hadn’t read it) I had a little wander around the priory to admire the stone ruins, before heading back to the hotel.

It turned out that a lot of the route was near the road that I ran along, so I could take a few photos (for example, of the jelly baby marshals) while I was heading back.

I am so glad that I visited!

Have you ever lost a finish token? I live in fear of dropping it or throwing it in a bin with a tissue by mistake or something!

2 thoughts on “Thetford parkrun with the Honey Monster (I think)”