Last week was a fairly normal week although I missed the club run on Tuesday as I got home too late.  We did go to the cinema on Monday to see Early Man (which, despite seeing adverts for, the football theme had totally passed me by- anyway it was enjoyable and lots of chuckles). It was the super blue moon on Wednesday and things had been feeling frantic. At yoga we were told that energy builds up as the moon waxes (I am not really sure about this, although often the kids go a bit crazy around a full moon so who knows!), and so it was a more calming session which was what was needed.

On Thursday I got home pretty late, and decided to have a long walk (well, a couple of miles) instead of a run.  I did have time for a run, but it would have felt like a rush to get changed, and probably would have just ended up being a short plod (more like junk miles I suppose)- a cup of tea, dinner, and then a walk felt like the right thing at the time.

We opted for Ellenbrook Fields on Saturday- I was there early again so had a little run first- I kept my coat on because it was so cold! 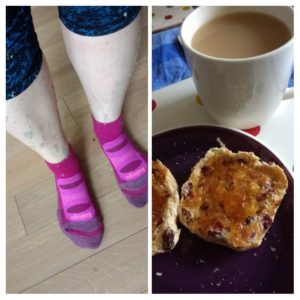 It was also fairly muddy- one guy fell over right into a massive puddle on the first loop (I think pretty much every runner around him checked he was OK) so we didn’t go too quickly. When we got to the runway (still with a km to go) we were steadily increasing the pace, and Dad had a burst of energy so closer to the end he sprinted off. It’s funny, it looked to me like he was so far ahead by the time I finished, but he was only 11 seconds (and 3 people) ahead of me. Did anyone hear the More or Less Episode about parkrun this Friday? They were trying to find the easiest and hardest parkrun course in the UK (although they did call it a race and not a run- tut tut!). I hadn’t been to the courses that they visited, but it was interesting hearing about how they tried to do it, by looking at average finish times and average age grading. This does seem a bit flawed to me, because the parkrun could just be closer to a load of running clubs or the average might go up or down over time with more runners.  Andy had bought some hot cross buns so I toasted them for breakfast, plus tea, and finally started to warm up.

I had a lot of work to get through, so after a shower I powered through for several hours, had a break where we walked into town, and then carried on working once home- I think I finished at about half six but I wanted a break on Sunday so I was pleased to get it all done. 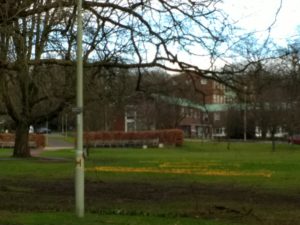 On Sunday I was off on a long run- this week was 12 miles. I have found that if I run further than 13 miles in my training, I enjoy the actual race more, so I am trying to work up to that.  I used the same route as last week but added a little bit at the beginning and end, and it ended up being 12.1 miles- I was impressed with my guesswork! The run was pretty cold- the wind seemed very cold so my cheek bones felt like they turned to ice. I did see more crocuses though- I love spotting the signs of spring. 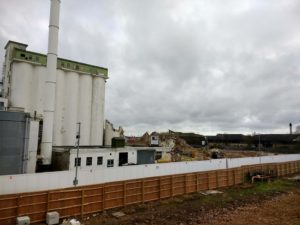 Of course I had to stop and take a photo of the factory- I think they are leaving these last few silos to be part of the new building, so I think the next few changes are going to be them getting rid of the big piles of rubble, and not quite so dramatic.

Anyway, the run took ages (2 hours 15) but they are supposed to be slow. I made sure to do some stretches when I got home, especially the downward dog- this seems to bring a lot of relief to my legs and shoulders, particularly after a long run.

I didn’t feel too bad after a shower and breakfast. I’ve bought pack of innocent kids smoothies to have when I get home from a long run (I know I could make a smoothie, but it is a faff to sort out the blender and chop fruit and then it takes time so I would just wait until after a shower)- having something like that seems to be good too as it gives me a little energy but I don’t always want food right away- I tend to have a shower and then breakfast, but then get a bit of an energy crash later. We had a walk in the sunshine in the afternoon, and then popped over to have a cup of tea at Andy’s parents, although I did get quite stiff sat down.

I’d caved and bought a cinnamon roll on the Saturday so we shared that in front of the TV. 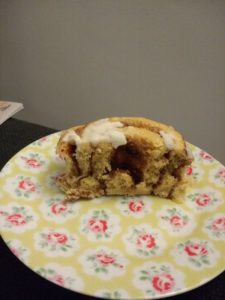 I think the longer long runs have been making me a bit stronger- a few weeks ago I was fairly stiff on Mondays, but last week and this week haven’t been too bad. I’ve had a walk in the evening to help with this, but hopefully it’s a good sign. I want to enjoy this half more than I enjoyed the Hertfordshire half and although there were lots of issues (I wasn’t 100% well, it was freezing cold, I was all stressed because of the traffic jam) I also hadn’t managed very many long runs due to different things getting in the way. 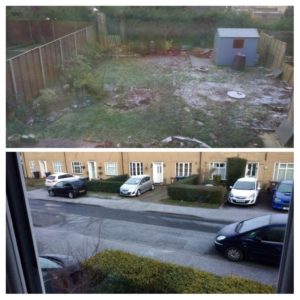 This past week has been busy with work, so I only managed one run on Tuesday, and I kept that short as I knew I would be home late on Wednesday and Thursday (no yoga- sad face). I was surprised one morning to see a dusting of snow, but then that turned to annoyance when I had to chip the frozen show off the windscreen of my car because of course I had forgotten to put the cover on it.

I think my plan is 13 miles this weekend, then 14 miles next Friday (it’s half term- hooray!),  and then around 10 the following week, as that will be the  week before the race. It’s suddenly coming around quickly.

Do you have a pre or post long run routine?  Which is the hardest parkrun course that you have run?  For me, Tring is the toughest I have done with some huge hills (although it’s on my list to go back to as the views are meant to be amazing, but we went on a foggy day).

10 thoughts on “The long runs are getting longer”