Happy half term to all the teachers out there! I met up with a friend at The Waffle House after work on Friday as an end of half term treat- I was very pleased to see their mulled apple juice on the menu, as last time I had already ordered my standard Earl Grey (you get a pot and some extra hot water so tea is always a good choice) when I spotted it on the menu. Once home I watched a bit of the opening ceremony- those drones were impressive. I have started a count of how many times Gangnam Style is played on the TV- I think I’m up to 5 and I haven’t seen that much of it!

On Saturday both Dad and I had suggested we visit Panshanger parkrun- Dad could not even remember the last time he had run there (it was part of the NYD double for me) and I absolutely love it there so needed no persuading. We usually meet at Ellenbrook as it’s half way between where we live, and they can cycle, but Dad isn’t cycling there and back yet so would be driving anyway.

We ran the run together, enjoying catching up on news and also loving the scenery there. I know that all parkruns are great, but Panshanger has such variety of scenery with woods, fields, lakes, streams, and although it feels touch at times (as you start and end uphill) it’s fairly fast. As the finish line came into sight (at the bottom of the hill) I had said to Dad that if he felt like sprinting ahead, he should, and a split second after telling me it was a good pace, he started to overtake more people and sped up the hill. In fact (according to strava) it was my fastest Panshanger with the alternative ending, and 28.14 was quicker than the flat (but muddy) Ellenbrook from the week before.

There was a cake sale for a local charity, so I bought a piece of banana bread for me, and some ginger cake for Dad.

My cake (which I enjoyed after lunch) had a smiley face in it! 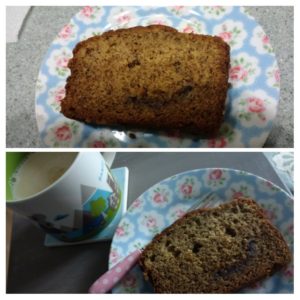 Once home and showered it was time for some breakfast and winter Olympics- I am really excited about this. I can leave a lot of the sports (curling, hockey…) but things like the slopestyle with snowboards and skis with all the flips and jumps, and the snowboard cross where they race are just so exciting to watch. 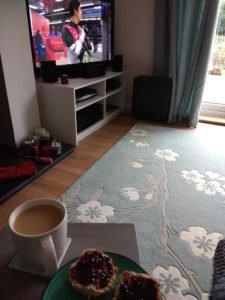 We walked into town before lunch (to avoid the heavy rain mainly) and then I spent the afternoon pottering around, making a cake and watching a bit more TV. All very relaxing. Although the cake didn’t turn out so well. I had seen a recipe for a ginger cake with lingonberries, and although the cake turned out well, the icing was super runny and also there was way too much. The icing was a cream cheese one, and even as I was weighing it out I thought there was too much sugar (this makes it thinner) but I just carried on regardless. Even after leaving it in the fridge it was still runny. I used raspberries instead of lingonberries, but as I had some lingonberry jam (good old Ikea) I spread a little in the middle to give it that tart flavour. 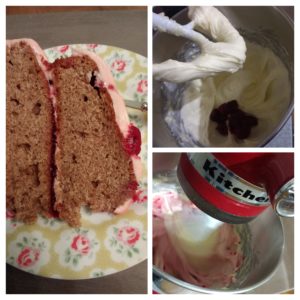 What I should have done is just leave the jam in the middle and then add the icing to the top, but because the instructions said to put icing in the middle too, that’s what I did. I must still be tired from the last week at work! Of course all the icing slid out, and then the top layer of cake started to make a bid for freedom too. We did have a slice on Sunday evening (and it was tasty) but it doesn’t look good enough for guests (and I had loads of icing left) so I ended up making little cupcakes on Monday to use up the icing and to have for guests instead.

On Sunday morning (after not sleeping well- I think maybe I was worried about the impending long run) I wrapped up warm (after seeing that it was 2C but felt like -3 due to windchill) and headed out for 13 miles. This is my favourite street- at the end there are three houses and their cars colour-coordinate with their garage and front doors (left to right it goes grey car and doors,, white car and doors, blue car and doors)- I always spend a while wondering if it was on purpose and perhaps do more people colour code their cars? Or do they just like that colour? 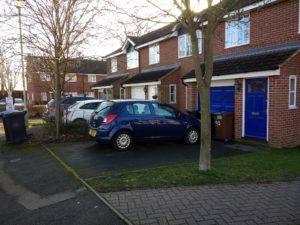 It could indeed be “a thing”, as it was only by chance that I found out that wedding invites hint at the colour scheme (when I wore the same colour to a wedding and although the bride didn’t mind at all, other people wondered why I had not avoided it seeing as it was on the invite- I had no idea…). I also got to see the factory (this time with blue sky) although now it’s just the rubble piles that are getting smaller it’s less dramatic. 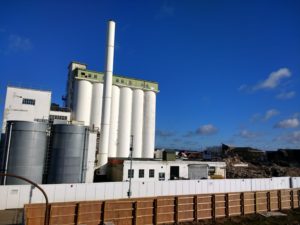 I also got to know what it was like to win a race. There was a local race (Love Welwyn 10K) happening- I sort of knew this but had forgotten, as really what I could have done it sign up, run to the race, run it, and then run home to make up the miles, as I’ve not done it before as often we go away for this weekend of half term. Anyway, I didn’t exactly know where the route went, and at one point I was running down a road and I saw the 7km sign and a “water station ahead” sign. There were no runners about (It can’t have long started) but the marshals at the station kindly offered me a drink. I ran along the road and saw the 8km mark, and then the road turns a corner and you run downhill to the end- at the bottom of the hill were loads of people in high-viz who started to nudge each other and look at me. Someone official-looking started taking photos of me with a huge camera- uh oh- they think I’m doing the race. I mean, no men had gone past and I am clearly not a fast runner when you see me (standing still or running)- especially at this point of my long run where it’s more of a 11min/mile shuffle than any sort of fast 10 speed. There was no way of avoiding the crowd so I tried to make it obvious (yes, I could have just said “I’m not in the race” but then what if they actually didn’t think that and it got all awkward..)- one lady even stepped out onto the pavement and made a show of looking for my non-existent number. Thankfully as I got to them my route peeled away from the race route and no-one chased me. I then bumped into a few of the runners from my club who were coming along to cheer on the runners- they told me I should have tried to win it for the club and at least get a medal (of course they were joking). It turned out that our club actually won the trophy for first ladies (Go OH Ladies Whoop Whoop)- so if I had actually entered I would have sort of won. One year!

When I got home I was feeling pretty tired- I had meant to take a nakd bar with me but forgot it, and I think for the final mile I could have done with some sort of energy. On the actual race I’ll have breakfast so that should be fine. I made sure I did some stretches as soon as I got in, and then had a smoothie before I went for a shower. This does seem to help and means I get a bit of energy in when I don’t feel like eating. We went on a little walk (2 miles) as I didn’t want to stiffen up too much, and then went for a cup of tea at Andy’s parents. The walk was perfect timing as the clouds were getting darker, and when we came out of the shop (we went into Morrison’s to get three things so it wasn’t long) the ground was all wet and there were hail stones all over the verges, but it didn’t snow or hail again until we were round at their house.  I was glad of a day off today to recover from the long run- I was fairly stiff when I woke up but I walked the long way into town in the morning and have done a lot of pottering about at home so I’ve not been too bad so far.

Do you like doing races as part of longer runs? Have you been enjoying the winter Olympics?

6 thoughts on “Happy cake, the winter olympics and a little cake disaster”