After going to Valentine’s parkrun last weekend we had a lovely wander around London, enjoying the sunshine. After brunch we walked around Borough Market, but when you are full of pancakes it isn’t the best place to be! 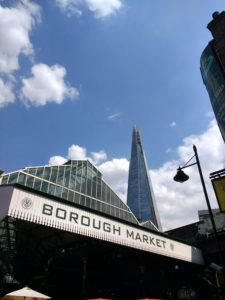 We went to the Tate Modern just to see what it was like, but modern art appears not to be my thing. 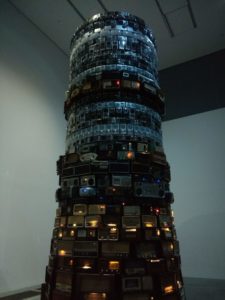 I did like this tower made with all sorts of old radios and equipment. 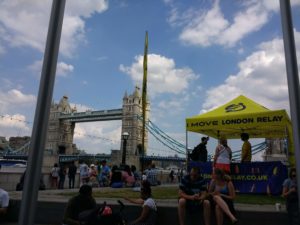 I also got rather excited when we saw the I Move London relay tent- as we walked over Tower Bridge we saw a couple of runners carrying the baton- I gave them a big cheer and one of the women waved a hot and tired looking thanks to me.

We then picked up our bags from the hotel and got a train home, walking back from the train station and finally getting home at about 6pm.

On the Sunday I had a run and then did some baking as we were going to Andy’s parents to watch the football. This was a raspberry and chocolate tray bake from the Sweet Vegan cookbook- a sort of oat crumble mixture with coconut, pecans, raspberry jam and dark chocolate buttons as a filling. 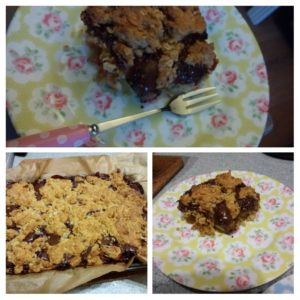 Then onto a busy week:

Monday- after work we went to see The Incredibles 2- good fun but maybe now there are so many superhero movies it is a bit samey in a way. It was a bit of a rush as we had someone painting our dining room for us and also the plumber came by again to try and sort out the leak a bit more (as he can’t do the actual work until it cools down a bit as it’s too hot in the loft for the 2 days of work needed).

Tuesday- run after work. We ate dinner on our laps in the living room as we didn’t get around to moving the furniture back.

Wednesday- we went out for dinner and then picked up my parents and brother as we had tickets to see Joe Lycett at the Alban Arena. 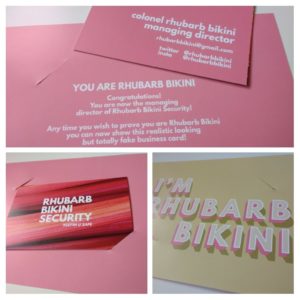 It was a funny evening- it was a bit like Dave Gorman at times with things on the screen for us to read (letters he had written/ things on the facebook selling sites).

Thursday- After a day of moving furniture at work (we are swapping the furniture between 4 rooms so that we are closer to our outdoor area so literally all cupboards, chairs, tables etc had to be moved) I wasn’t quite feeling ready for a 5 mile race. I’v done the Panshanger 5 for the last two years and always really enjoyed it, and this time Dad was running it too. When I got home I had a cereal bar and a cup of tea, as by then it was a bit late to eat anything bigger (it was 5.30 and the race started at 7.30). Dad picked me up and 6.30 and we drove there, collected our numbers and chatted to other runners. 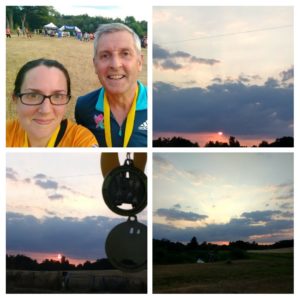 It’s a fairly hilly route with some very steep hills, and Dad was feeling tired too as he’d been on a long (50 miles maybe?) bike ride the day before. It felt cool when we started, but soon we were sweltering and dripping in sweat. We ran the hills that appeared in the first couple of miles, but at around half way there is a super steep hill so we decided to walk it- we weren’t aiming for a specific time, we just wanted to enjoy it. As we finished and collected our water and medals we had the most amazing view of the sun beginning to go down. What a perfect end (and 22,000 steps for the day, no wonder I felt tired!).  My official time was 52:30- I think a little slower than previous years but I am very happy to have completed it.

Friday was the last day of term and we had booked tickets for Zoo Nights at London Zoo, so another rush home, quick shower (needed after more furniture moving…) before we drove to High Barnet and got the tube in to Camden. It started at 6pm, and we arrived just before, so it was perfect timing.

Most of the exhibits were open (apart from the Gorillas as they had a baby and it was past their bedtime) and they had loads of food trucks in the centre with live entertainment. After a walk around a few places, we perused the food trucks and got some dinner- I got a lovely vegan bean burger – and we sat on a bench (and I remembered why I usually need a knife and fork for a burger-mustard gets easily squeezed out of the bun) before wandering around. There was a delicious brownie stall (Bad Brownies) and they cut them in half when I asked so we shared a peanut butter one, and then took home a caramel and raspberry one to save for a later date.

There was some amazing art being created on the walls of one of the underpasses. 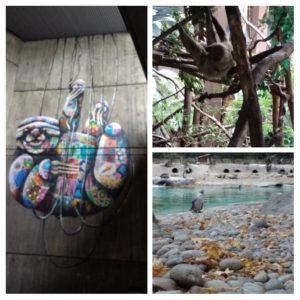 The frog one with Kermit was my favourite.

We listened to a talk in the rainforest enclosure, and a bit of a talk by the giraffes, and one at the penguins. I had not been to London Zoo for years (we have Whipsnade nearer  which is much bigger and easier to get to) so I wondered how much it had changed. Yes, some of the enclosures were bigger (the penguin pool is now “the biggest in England” which seems faint praise) but they are still tiny. The lady at the giraffe talk said about how they can run at 30mph, but I can’t see there is enough space in there for them to get up to that speed. I do understand that some conversation needs to happen in captivity, and lots goes on to help with species being saved, but I do feel like the is such a small amount of space there, particularly for the bigger animals, that it still felt a bit sad.

We were about to leave when Andy pointed out a Dutch pancake stall (and seeing as we shared a brownie, I decided it was OK to share one of these to add them up to make a whole dessert each…) so we shared a portion- they are little round pancakes (a bit like the little Danish ones) with various toppings to choose from. We went for melted chocolate and strawberries and they were divine. 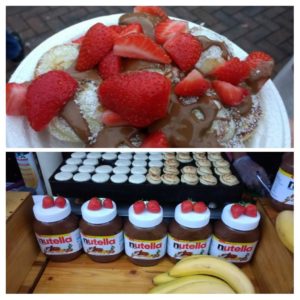 On Saturday morning I met Dad at Ellenbrook and we ran around together (well, until the final bit when although he said he was tired, he suddenly had the energy for a sprint finish!) and then I had to get home quickly as we were off to the Penn Festival (in Buckinghamshire).

The main draw for us was that Manic Street Preachers were headlining, but when we got there in the afternoon we got to see Noasis (who were pretty good), Badly Drawn Boy (why was he still wearing a woolly hat in that weather?) and Starsailor, plus some dodgy dance music that isn’t really my thing. We had bought a little picnic on the way, so we sat outside the tent where Mel C was playing (doing some good covers of 80’s classics) and ate  them. I had visions of us sitting on the green grass while we waited for the next band to come on, but in reality it was a dust bowl and I really should have realised this seeing as all the grass is now yellow. Wearing white sandals wasn’t a good idea as they are now brown and my feet were filthy with a sort of dust line where you’d normally have a tan line, and you ended up with the dust in your mouth as it just blew everywhere (a bit like when you get sand in your mouth at the beach). When it got dark the moon looked red from all the dust swirling around. 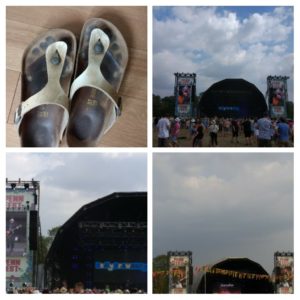 Anyway, Manics were fab and although I was feeling so shattered by such a busy week, it was worth it in the end.

So, that was the week that flew by and my feet hardly touched the ground! I was looking forward to a Sunday (mostly) at home and an evening where I could just watch some TV for a change!

Do you like going to see shows or comedians? Are you a fan of modern art?

2 thoughts on “Feet not touching the ground”