So on Saturday morning I was off to Letchworth parkrun, to tail walk.  I’ve run it once before, and it’s a lovely two lap route around farm fields and playing fields. As I had a race on Sunday I wanted to tail walk, and I also wanted to visit the town centre as a “weigh and pay” shop had recently opened and I wanted to visit it. 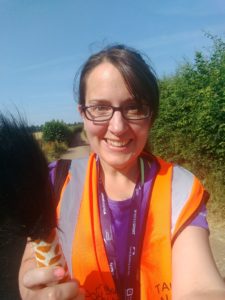 I was very excited to be given an actual tail to wear as tail walker! A giraffe tail! I had to have someone help me to clip it on, and then it was so long it dangled on the floor so I held it over my arm! I didn’t want to lose it out on the course.

It was absolutely baking- 23 degrees when I got out of the car at 8.30, and 27 by the time I finished. The views were stunning across the open countryside, and I could hear so many crickets/grasshoppers in the fields. I was behind a couple of women and then a little further up a lady who announced at the end that she was a 70 year old grandmother. All three of them were running at times and walking at others, it was a tough one and I was really hot and bothered by the end. I finished in 54:16 and headed into town. 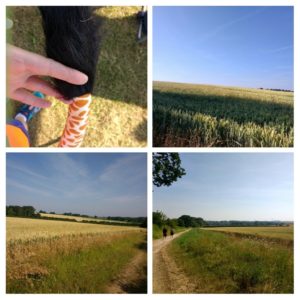 I was heading to Bamboo Turtle, which is aiming to be a zero waste shop.  When I was little we always used to go to the weigh and pay shop to get things like cereals and flour, but those sorts of things all closed. This one in Letchworth recently opened- the idea is you bring your own containers, weigh them, write down the weight, then fill them with whatever you are buying (everything was priced per 100g) and then pay. The lady in there was very helpful, saying she could put things back if I had weighed out too much. 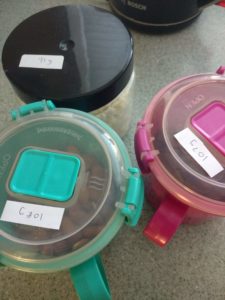 They did have jars and things for sale if you didn’t have your own though. I got some coconut chips, almonds and dark chocolate buttons for baking, plus a bamboo straw, although I need something to carry it in (so that if I get an iced drink in town I can use that straw instead of a plastic one). 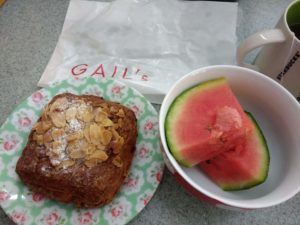 Once I got home I had a lovely breakfast of a chocolate almond croissant (I bought it in town on Friday as a post crazy-work week treat) and watermelon. Seriously, nothing is better than watermelon when it’s hot.

Then we were off to London with Andy’s parents for the Hampton Court Palace flower show. 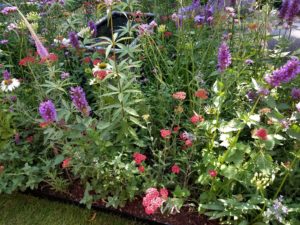 Again it was absolutely baking hot. 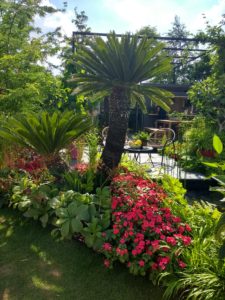 The gardens were good to see, and we picked up a few ideas for our own. There were also loads of stalls but we didn’t buy any plants as the ground is rock hard at the moment so I don’t think anything would survive for long.

We had thought we might avoid the score from the match, but there was a big screen up showing it, so we heard the two massive cheers which gave away the score somewhat!

Normally I find scarecrows pretty creepy, but this one was very clever- different parts of the body were represented by different vegetables (I think the liver was a butternut squash?). 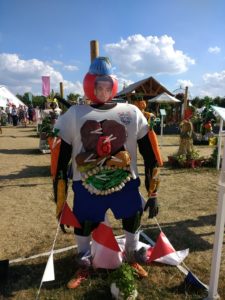 I’d packed a clif bar and had that at around 5pm. We also took loads of water with us (and there were a few places to refill) but it was just so hot everywhere that I wasn’t feeling great by the end, really craving something salty. I think we did about 12,000 steps walking around (plus to and from the car) and all of that was really in the sun as there wasn’t much shade. By the time we got home it was so late we decided to get a takeaway pizza- something we only normally do if we are with other people. I think the only other time we had one was the day we moved into our house in Hatfield 12 or so years ago! We ended up eating it at 9pm in front of the TV.

Then on Sunday I was off to Ware for a 10k race. I love this race (there’s a 10 mile too, but since it’s been in the summer and not the autumn the 10k is the better option as it’s one lap not two, and there isn’t much shade).

After picking up my number I sat in the shade and seriously considered not running. It was just so hot. I had a nuun tab in water before I left, but hadn’t bothered with breakfast so I could sleep for longer, plus I knew I would not be racing it and I wouldn’t eat breakfast before a training run. It didn’t begin until 10am though the heat was building all the time. 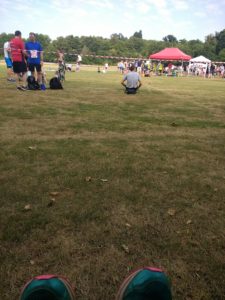 Once we started it was OK, but so hot. I had decided to walk up the hills to save myself from getting overheated and overtired. My legs were not happy though, just lacking energy.

I took a few photos on the way around and enjoyed thanking the marshals. As well as water stations they had splash buckets with sponges so you could cool yourself down. At one point we ran through a housing estate and loads of people were out with their garden hoses offering to spray the runners- it felt so good to be momentarily cooled.

At around 4 miles I bumped into a couple of girls from the club, so I chatted to them for a bit but eventually lost them. The second part of the route is very flat, so apart from walking at the water stations I kept on going. I ended up overtaking a lot of people in the final couple of miles, so I think I paced it OK for me as I didn’t feel awful at the end. I did get overtaken by the lead runners in the 10 mile race, which I don’t think has happened to me before, but it was about finish lines and not finish times for me.

Near the end some children were manning the final splash bucket and had cups, basically offering to throw cups of water over you as you ran past. I said “go on then” and was drenched, but it was so hot that the water dried pretty much instantly.

I saw Donna (my lovely running club leader) at the end (her boyfriend had finished ahead of me and she’d been cheering people on) so we chatted for a bit once I’d got myself drink and cake for £1- that’s the whole point of this race! Lemon cake was just what I fancied (brunch by then). I got a text pretty much as I crossed the line saying my time was 1:07:40, and they announced your name as you ran in which was a nice touch. 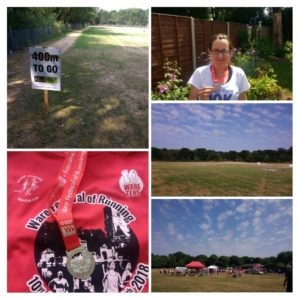 This year as it was the 10th anniversary, you got a t-shirt and a medal. It’s a pretty smart top with black down the sides, although red isn’t really my colour (especially when my face matches it after a run!).

While we were chatting, Daniel, the guy from Ellenbrook Fields parkrun (who I met at Upton parkrun) came up to say hi- he’d run the 10 miles in not much longer than the 10k had taken me. I was very glad I wasn’t going any further. After a chat it was time to head home for a lovely shower (the water worked, hooray) and then basically trying to stay as cool as possible inside. I ended up having a little lie down in the afternoon as I was still feeling tired from the busy week at work, and then after an early dinner we went to the cinema to see Tag (which was sort of OK and funny in places, and then took a weird turn at the end which just seemed inappropriate for that sort of comedy film). At least it was cool in there.

Did you manage to stay cool over the weekend?

Have you seen anything good in the cinema recently? I am looking forward to The Incredibles!

4 thoughts on “Tail walking with a tail, a garden show and a hot race”