I am sure I say this all the time, but the weeks are flying by!

Last weekend (after Rushmere parkrun) I needed to do my final long run before the half marathon next weekend.

The route planning went a bit wrong before I started- I wanted to do 11 or ideally 12 miles, but I still don’t have the hang of how long each route is, so I mapped one out, saved it as an image and emailed it to myself so it was on my phone. When I got up in the morning I looked at it, and then realised that the image included mile times (when of course it wouldn’t have known the mile times when I mapped it) and this route went by the lake, and I wasn’t planning on going that way (as it would be very soggy/muddy) that it dawned on me that I had emailed a different image of a route from Strava. Whoops. It was already a bit late and I didn’t want to put the run off any longer as the weather was only going to get worse. 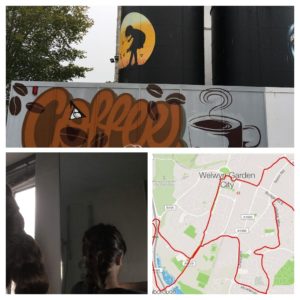 Because it was so rainy and windy, I decided to plait as much hair as possible. My hair is too thick for one plait so I did two on each side meeting around the back and a third with the rest, putting them all in a pony tail. It seemed to hold.

And onto the run. I made a mistake with clothes too- the day before had been chilly but I was OK in a t-shirt, and it was only a few degrees cooler so I thought I would be OK. I got a long sleeved top over my t-shirt to wear as I warmed up, thinking I’d take it off fairly soon- how wrong I was. It was so cold- within a few minutes my hands were so cold and my top just soaked through as it wasn’t a waterproof one.

I sort of enjoyed most of the run (the challenge of it perhaps) and caught up on some podcasts, but at times it was fairly miserable because the pavements were flooded and as cars drove past they would throw up a wall of water. A few times I waited until a gap in the traffic so I wouldn’t be totally soaked. Andy had messaged to say he would come and pick me up, but I didn’t see it (I got a new phone in the summer and I didn’t realise that the photos were uploading all the time instead of just on wifi so I’d used all my data and couldn’t get the whatsapp message)- not that I would have taken him up as once you are out there you may as well finish. As the following weekend we were away I knew it was my final chance for a long run so I wanted to finish it.

When I finally got home (2 and a quarter hours later I think) I was dripping so much I had to step inside onto the doormat and peel all my clothes off right there, jumping straight into the shower (I’d usually at least have a drink and a bit of a stretch). I was so cold that the water was stinging my skin, and after my shower I put my pj’s on and got back into bed (the only time I’ve done this before has been after crazy long runs during marathon training I used to have a little afternoon nap) to have breakfast and a massive cup of tea. Our heating still wasn’t fixed so this seemed the best option to warm up- it took a while! Once I finally warmed up (I think an episode of Location) we were heading into town to pick up a few bits on the way to Andy’s parents. Annoyingly, the weather had dried up and brightened up, but as we were going to theirs for dinner I didn’t have the option of delaying the run.

Anyway, it was done and I can tick it off, and have confidence that I can run a half next weekend.

Onto the catch up; yoga is term-time only so it’s been great getting back into it. This term each week we have been looking at a different chakra (a centre of spirituality in the body), doing poses and breathing exercises linked to the different areas.   It’s been good to have a different focus each week. I was doing the you-tube video once a week or so, but I realised that I have not managed this for the last week- it’s something I would like to do but just need to remember.

I’ve been mostly keeping up with 4 runs per week although I have not managed a club run in ages. A couple of weeks ago it was so windy which made the runs pretty tough. I’ve been mainly sticking to around 4 miles after work, 5 if I am not home too late, and a quick 3 before the cinema one evening.

We’ve been to see a few films including A Simple Favour which I really enjoyed- it was a lot like Gone Girl, but with some quirky characters and light-hearted bits to break the tension a bit. 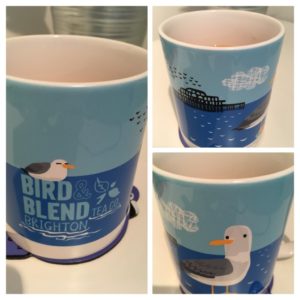 My Bird & Blend Brighton mug has been the perfect size for tea in the mornings.

I met up with a friend after work one Friday for a waffle. I was a bit early so I wandered around the park for a bit and saw lots of debris from the strong winds that week. I went for a banana flapjack waffle, which is a waffle with banana, little bits of flapjack and caramel sauce- really good. 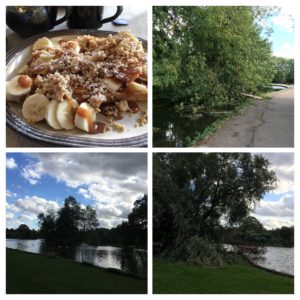 Would you go for a sweet or savoury waffle? I love their hummus and avocado one, but after a week of work I needed the sugar boost! Did you have much damage from the storm? Thankfully most of the big trees in our garden are gone now, so we didn’t need to worry about them blowing down (something which has happened in the past).