After the long and wet run of two weekends ago, I did get back into a bit of a  routine, but then last weekend we had to be out of the house the whole time where we had some works going on.

Back to the week before- Monday was a rest day (just a nice walk after work) and then I did a 5 mile run on Tuesday. Wednesday was lovely yoga (which was even more needed when the traffic was so bad it took me well over an hour to get home), and Thursday we had a leaving do at work so I had a walk when I got home and saved my run for Friday, where I had a lovely 4.5 mile run taking photos of all the autumnal leaves. 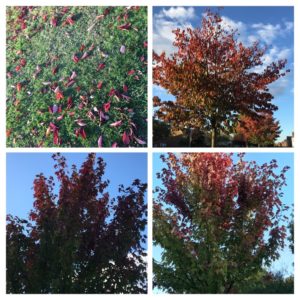 We had to be out all weekend for works on water tanks and boilers (this all harps back to the leak we had back in June/July- after that we uncovered a few more issues and so were swapping the normal boiler for a combi, which meant removing the old boiler and water tanks, installing a new boiler, diverting the gas and a few other things too)- basically if we could be out the whole weekend the plumber could keep working instead of having to turn the water back on for us to be home in between. 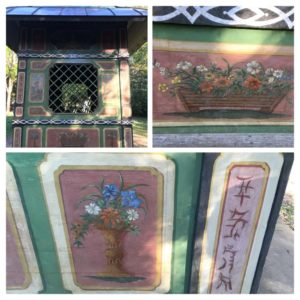 We headed up to Stowe (National Trust) for a long walk in the sunshine (I can’t find the photo of the beautiful autumnal trees though, so just this interesting building to look at), and then drove to Bicester village as I wanted to go to the Lululemon outlet. 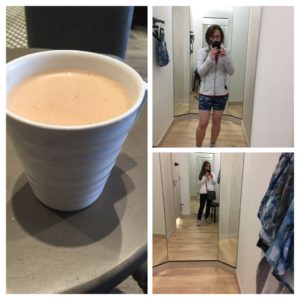 Also on Sunday we had a Hotel Chocolat hot chocolate- a seasonal special with spices and pecans I think.

The dressing room was so huge I could have done a long jump in there (although I can’t jump that far… someone taller could have jumped a long way too)- I couldn’t decide on the shorts because they are a lot shorter than the capris which I usually wear, but this summer has been so hot that I thought a pair of shorts would be a good idea, and as they were much cheaper than normal I decided to give them a go. 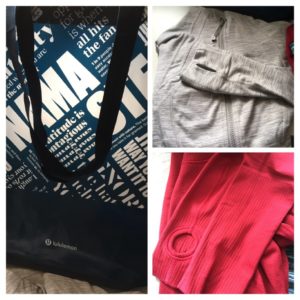 In the end I got a long sleeved top for running in the winter (I already have one of these and they are so soft and warm), a jacket and the shorts.

By the time I’d finished there time was getting on, and we had cinema tickets for the evening, so we went to the Pret and got wraps and fruit for dinner. I inadvertently tried a turmeric latte, as I ordered a chai latte for us to share, and the guy on the till said to the barista “one soya golden”- I queried it and when he passed it back to me he called it a chai, but when I took the lid off it was yellow and when I tasted it, it tasted like how I imagine soil would taste. When I took it back he said again “we call it a golden” and I had to have a bit of an argument with him, saying turmeric is golden (they do also have a turmeric latte on their menu) but this one didn’t taste like a chai latte. When he said it to the barista again, the barista queried it and then he ordered the right drink- a bit of a faff! The weirdest thing was while I was waiting, there was no queue, so the guy on the till was stood there muttering to himself “chai latte” over and over again- a bit awkward.

After dropping our things off at the hotel we walked to the cinema (through some underpasses where I have never seen so many rats in my life) and saw Crazy Rich Asians, which was good fun- not the most hilarious film but good for a Saturday night. The main guy usually presents The Travel Show (on BBC) so it was weird seeing him act, although each time he was doing something vaguely travel related (going on a plane, eating in a restaurant) it felt like his day job.

On Sunday we wandered into the shopping centre to get some breakfast and have a look in a few shops. We were going to head to Willen lakes for a walk, but it was getting very overcast so we went to IKEA (to stock up on marzipan cakes as you do) and then drove back to St Albans so that we would be closer by when the plumber called.

By the time we got there we both fancied a cup of tea, so we went to The Pudding Stop for cake plus tea, and then walked around afterwards, finding that the main high street was closed to traffic as there was a food festival going on, so it was nice for a wander.

We popped to see my parents and then headed home when the plumber called- he was clearing up the final few bits and left at around 8.30 on Sunday night- a full weekend of work for him. Our hot water tank was about 75% full of limescale which is why we could never have a bath (the hot water would only last until about 2 inches).

I went out for a 7 mile run on Monday after work, as a sort of taper. I saw so many beautiful autumnal trees- it’s all looking so lovely at the moment. 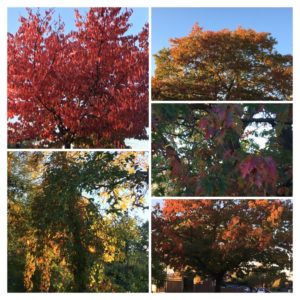 Confusingly (for me) this was one of the weeks where yoga was on a Tuesday instead, which just makes me feel like the days are wrong for the rest of the week. It was lovely- at the end we sat in a circle in blankets and did some meditation with a candle. I love this and I find that if I am awake in the night, thinking of it and trying to picture the candle can help me go back to sleep.

On Wednesday I had 4.5 mile run (spotting more autumn colour) and on Thursday after work I met Andy in town and we walked around for a bit (I am still managing 10,000 steps a day since sometime in July- before then I wouldn’t usually make up the steps on my yoga day, but my average would be higher as I’d do more steps on other days- now I have a walk before I go to yoga to keep the steps up). I was going to run on Friday after work but I was tired and wanted to save some energy for the weekend so we had another walk instead. 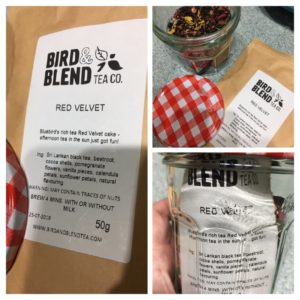 When tidying up I discovered that these jam jars are the perfect size for 50g loose Bird&Blend tea. I finished the Peach Cobbler tea so I’ve opened a new one (Red Velvet) which is really good.

I’ll save the weekend for another post, but I’ve nearly caught up!

Is it looking autumnal near you now? Do you have some nice places nearby to appreciate nature at this time of year? Do you do a proper taper before races?