And I thought I was doing so well- I am now a week behind again- how does it happen?

Last weekend was parkrun’s 14th birthday- when I first started going (back in 2013) I had to drive over to St Albans, so  I would tend to go when my dad and brother could make it, and pick them up. We tended to go around once a month. It was only when Panshanger launched (4 years ago this weekend) that I started going regularly, and on Panshanger’s first birthday I completed by 50th parkrun. It seemed fitting to be at Panshanger for parkrun’s birthday. I had offered to tail walk, as I was doing a half marathon the next day, and wanted to make sure I wasn’t tempted to run. Yes, you can turn up and walk, but I know if I got there without a job of walking to do, I would be tempted to run a bit. 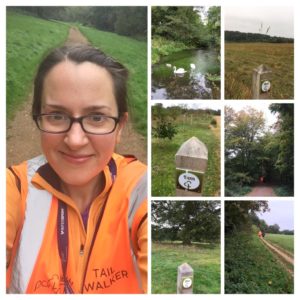 I met Dad in the car park, as he was running, and we had a quick chat before the run started. At Panshanger the tail runner gets a bag to put all the signs in as they go around (at Ellenbrook this isn’t needed) and you also have to shut a couple of gates behind you. I started right at the back but there were so many latecomers- after I had gone probably 1km people were still catching me up. Some people were walking it, but as the people came late and I’d stop to get the signs, they would get a long way ahead of me, so I’d need to run and catch up. At one point I wasn’t sure if I could reach one of the signs as it was on a tall post surrounded by brambles and stinging nettles- after a bit of trampling and jumping I managed to get it down!

I took photos as I went around- I love how the park changes with the seasons- and finished in a fairly speedy 47:54 (sadly nothing towards the bingo this week). I then headed back to the car and drove over to Mum and Dad’s where Mum was making us pancakes- I know I say this whenever I go there, but parkrun followed by my mum’s pancakes is the best start to the weekend.

It was a bit of a rainy day after that- Andy’s parents came over with our niece and nephew for a bit (they were babysitting and needed a change of scenery) and we popped to town later on, before having a relaxing evening in front of the TV. I nearly forgot to pain my nails (I like doing that before a race) so it was a slightly later night than planned in the end.

Sunday morning was a gorgeous sunny day. Andy had decided to come with me, so after a bit of toast and some nuun, we drove up to Wimpole- it’s around a 40 min drive from home, and the parking was fine, using the overflow. I had to pick up my number in the morning, and at around 9am there were only short queues moving quickly.

I’d taken a jumper to wear and gave it to Andy right at the last minute because it was cold! 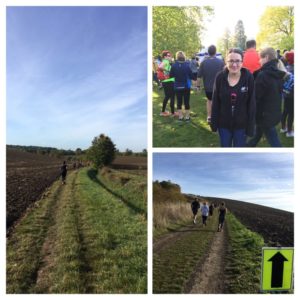 There was a 10 mile and a half, and we set off at the same time. Both routes took the same route until mile 9, where the 10 milers headed back to the finish and the half marathon did another loop. I was so cold when we first set off that my toes were a bit numb, but I soon warmed up, and the sun felt strong which helped. 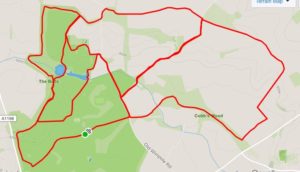 It was rather confusing trying to work out where we were- often I would be running down a hill, thinking that I had run up it before, but I didn’t see any of the faster runners until the final loop.

The first half was all good- I knew it would be hilly and I was going to enjoy it, not aim for a particular time. The scenery around there is lovely; a mixture of farm fields, wooded areas and meadows filled with grazing animals. Some hills seemed to go on for a long time, but you knew you’d get a downhill as a reward. There were loads of marshals out, all super cheery and encouraging. 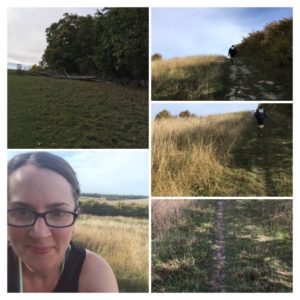 I took a few photos on the way around (trying to show the steep parts but of course that never works!).  I recognised a few parts from the parkrun course, and other places we had walked to on our various visits here- the grounds really are lovely and the scenery really made it enjoyable.

At the 9 mile point the marshals were saying you could change your mind and just do the 10 miles instead which was tempting- apparently you could just tell them when you finish and they would adjust your chip to show the right distance. It got fairly lonely then, as it seemed most of the people running at my pace were doing the 10 miles, so I was on my own for a fair bit. Then one of the muscles in my legs started to feel twisted (it happened in the Brighton 10 mile before) so I had to slow a fair bit to ease that. I think it was from the adverse camber earlier on, plus a lot of the farm fields were very rutted and sloped so that probably didn’t help either. My mind prefers trails but my legs prefer roads! At this point I was running down a hill and lots of people were running back up it (me on my 10th mile and them on their 12th)- it was quite a long one that looped up the hill, so I wasn’t massively looking forward to it.

At the bottom of the hill the route went through more woodland. My leg was still stiff but the flatter ground helped, and I was smiling at all of the marshals (seriously, there were loads).

Heading up the hill I decided to have a nuun shot block, as I’d taken half a pack with me- not such a good idea as because the packet had been open a while, the block had gone very hard and basically got stuck in my teeth! I knew there was a water station near the top of the hill, so I had some water after to try and wash it away (you are meant to have them with water anyway)- I was still smiling but the marshals “helpfully” told me I was still ahead of the back  runner (3 hour time limit- I had passed her coming up the hill for my mile 12 while she as going down for her 10th mile, so hopefully she wouldn’t catch me up!). This made me worry a bit, because I felt fine and thought I was smiling, but maybe I looked really bad?

I messaged Andy to say I was at 12.6 miles so he knew I’d be in soon, as he always thinks  I’ll be faster than I am, and this was a bit slower than I thought too.

The final mile was back on flat paths and I managed to pick up the pace and overtook quite a few people who had been a way ahead of me (my second fastest mile after the downhill at mile 8).

As I finished I was handed a massive flapjack, some water and the medal. I met up with Andy and we shared the flapjack and I popped to the bathrooms (where I saw how red my face was- maybe that’s why the marshals were telling me about the back runner) and then we joined the queue to the tea room because I had been looking forward to a scone since about mile 6! 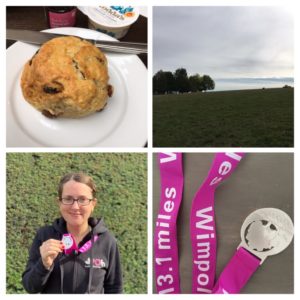 I enjoyed that race so much. Yes it was tough, and not a pb course by any stretch of the imagination (well, unless it’s your first one), but the scenery was so lovely and varied, and there were loads of marshals out on the course. There are real toilets (always a bonus in my eyes) and a National Trust cafe at the end takes some beating!

How did you celebrate parkrun’s birthday? Would you choose scenery or a flat route?

6 thoughts on “Happy birthday parkrun! And Wimpole half marathon”