The past week was a pretty standard week- rest day on Monday (a walk after work), a run on Tuesday (cut short because the traffic was so bad that my journey home took around 90 mins), and yoga on Wednesday. I was going to run after work on Thursday too, but I was feeling pretty tired, so when Andy suggested a long walk I decided that would be a better option. We went out for about 3 miles, very enjoyable in the mild weather and evening light.

On Friday I met Andy in town after work because we realised that our John Lewis cake vouchers were about to run out (they were only valid from 9th October or something) so we shared a piece of cake (chocolate, orange and redcurrant or something- very tasty) and a hot chocolate. 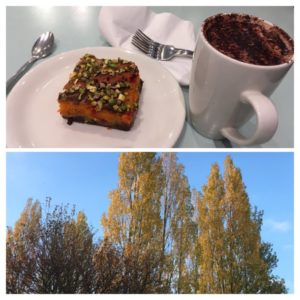 Earlier in the week I had been looking on the parkrun tourist tool (you can google it and it magically tells you your nearest parkruns, and you can select to remove ones you have been to if you want to see your nearest new ones). I still have half an eye on the alphabet, but really a journey to a D or K is too far at the moment. If I get a couple more G’s, I can get the “Stayin’ Alive” badge on the chrome extension (you need 3 B’s and 3 G’s), but the G closest didn’t grab my attention. Since doing all of the Hertfordshire ones, I did look to other counties to see if I could add another one to my list. Buckinghamshire is one bordering county, and when I wrote down the list (9, plus one prison one which I can’t include) I’d already run at 3 of them (Black Park, Linford Wood and Rushmere) so I thought I’d tick another one off. Wendover Woods caught my eye as it is probably the closest (just beyond Tring), it was one lap, through woods and looked really pretty.

The next morning on my way to work, I put on the newest With Me Now podcast (it’s the reincarnation of the old parkrun Show podcast with the same two presenters- Danny Norman and Nicola Forwood- and if you are interested in parkrun tourism, then I would really recommend it- it is much more for parkrun fans than the official one because the two of them are so passionate about parkrun but also very involved in their local ones) and anyway, the episode was entitled Bendover Woods- yup- Danny Norman had visited there last weekend! I didn’t realise how new the parkrun was- when we went on Saturday (I picked up my brother) it was event number 6. They seemed to have loads of tourists, and I heard someone else mention that they heard about it on the parkrun podcast, so maybe that upped the numbers a bit too? 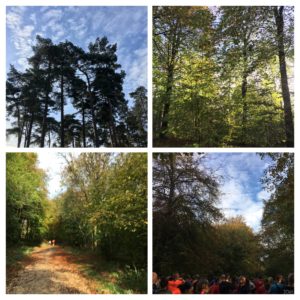 Anyway, onto the parkrun. The journey was straightforward, and we arrived at about 8.40am- just before the exit we passed under the bridge which goes from the Tring car park to the parkrun and saw someone in a high-viz jacket walking over it. I think they would make a good (but super hilly) NYD double! There was loads of parking at the woods (run by National Forestry I think) and the area where people met for the briefing was right by the car park. We saw a sign for a Gruffalo (I think it said monument/ sculpture) but we wandered about a bit and couldn’t find it. We had the new runners briefing promptly, which turned out to be most people there I think. There were a few milestone runs, and as they were announced the photographer came into the crowd and took some photos of the people celebrating which was a lovely touch. The RD then did the main briefing, with a warning about a short course deviation as there was building work going on.

We then had to walk a short distance (they said 400m ish) along a track to the start. We had been warned that the start was mainly downhill, with the second half being mainly uphill, so we knew to take it fairly steadily. 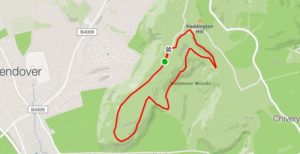 As we ran down a track we passed the Gruffalo model, so I said to Tony we’d have to go back at the end so we could have a photo.

The course went down through woods with some quite steep sections, and then steadily up again- there was one short steep bit where most people were walking, but we just ran very slowly up- you then got to a bit of a ridge-line with gorgeous views across a valley, before heading up more gently towards the finish. I think it wouldn’t be too bad once you got to know where the up and down bits were, although I am never that fast on the downhills either as I worry about slipping or tripping. The final mile was +123ft, compared to the +202ft in Bevendean Down (which you do twice) or +219ft of the first mile of Tring, so although it seemed hilly, it wasn’t that bad. We took our time and enjoyed chatting to each other, and of course the lovely views.

Once we finished (34:38) and had our barcodes scanned, we walked down the hill to where the Gruffalo was standing, for me to get my photo. There was a trail there, and we saw this amazing owl bench (a bit like the carvings at Heartwood Forest) so I wonder if the trail had the other animals from the story? Anyway, Mum was making us pancakes so we didn’t hang about- a quick visit to the car park machines and then off we headed. It would be a good place to visit at another time, and we have suggested to Mum that if we go back in the spring she could come along and enjoy a bit of bird watching while we run.

I thought it was my 50th parkrun course, but wasn’t 100% sure, so when I got home I checked that I was correct. A very enjoyable venue for my 50th different one (and 168 in total). I still have 5 of the Buckinghamshire ones to visit, so it will take a while, but it’s nice to have a different focus to help me choose where to visit. 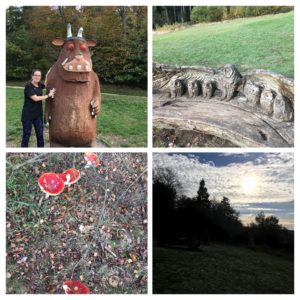 Bottom right is where the statue was- overlooking a valley, very scenic indeed

Breakfast was lovely (of course)- although I’d packed tracksuit bottoms (after last week when Mum had to lend me some legging) but stupidly I’d put them in the same bag as my water bottle which then leaked all over them, so when I got them out of my bag they were all damp. At least it was fairly warm on Saturday so I was OK to stay in my kit and just put an extra jumper on.

In the afternoon I had some work to do, and then once that was finished I pottered in the garden a bit before walking to the shops to get some salad for dinner.

On Sunday morning I went out on a run- I ended up doing 8 miles in perfect running weather; cold but bright, virtually no wind. Everywhere was looking amazing. 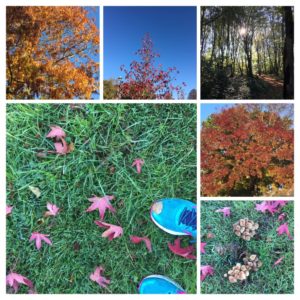 After a shower and breakfast we walked into town and it was so warm I got an iced chai for my free Vitality drink- October is nearly over and this is just crazy. On a sad point I watched a bit of Autumn watch- it’s in the US but they were saying that the later winters are having adverse consequences for some animals- some birds would usually migrate once the lakes freeze over, but because that is happening later their winter feathers have grown and they can’t fly the distance.

How do you choose which parkrun to go to?  Are you working on any challenges at the moment?

8 thoughts on “Wendover Woods parkrun and a Gruffalo!”