Originally last Saturday I was going to be heading into London to meet a couple of friends for a parkrun and breakfast, but one of them couldn’t make it so we have postponed until January. It probably turned out for the best because I hadn’t run all week and although I was feeling better, I opted for Panshanger which meant I could get up pretty late and drive around the corner, as opposed to getting up super early to run to the train station.

I saw on their facebook page that they would be collecting old trainers and sports kit for Kit Aid, so I loaded up a bag with 3 pairs of trainers and some old race tops (is it just me that saves trainers?). It was absolutely freezing at parkrun, and I headed around fairly gently, with many a tissue stop!

In the afternoon the rain started tipping down. We had tickets to see Reef in Oxford and were going to head to Waddesdon Manor on the way (an NT place) to see the Christmas lights, but we thought it would be pretty miserable wandering about in the rain, so we just headed into the centre of Oxford instead.  A quick dinner in Leon and then a fun evening listening to them play the classics.

On Sunday morning it was time for the running club Christmas bRUNch- there is a club run (from Hatfield) and then we meet at Bill’s in WGC for brunch (some people just come from the breakfast without running too). It’s only a mile and a half from home, and as we had a pretty late night I only left at about 9am (the brunch was at 10). I thought I would meet them on the way but they ran a different way and it was rather slippery in places so I cut my run short, doing just over 4 miles in the end. Brunch was of course delicious, and it was lovely to catch up with people as I’ve not managed a club run in ages. 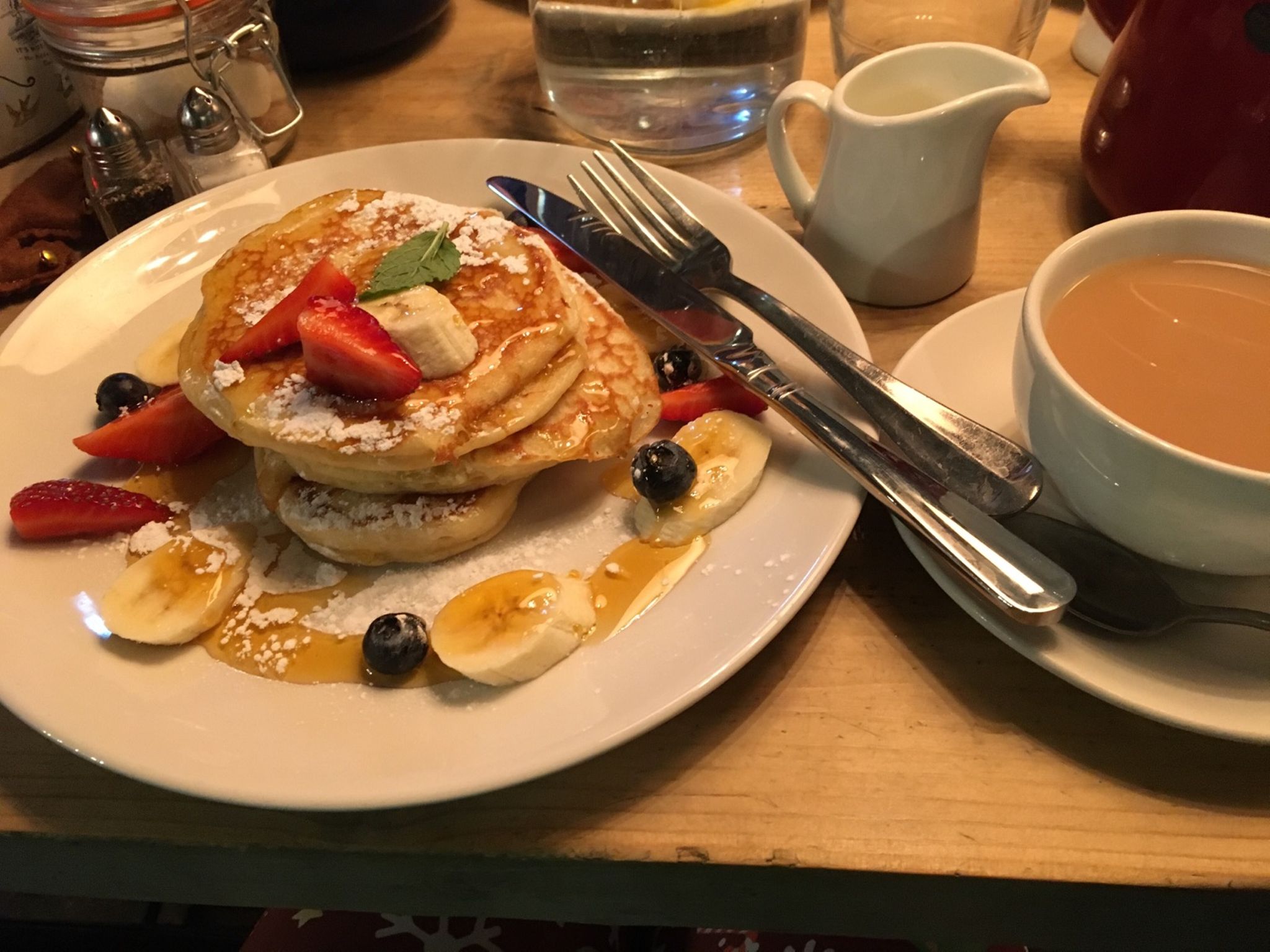 Andy walked in and met me, and we walked home together. After a shower I did some cake decorating- I went for a Minnie Mouse theme for our cake this year to remind us of our Florida holiday. 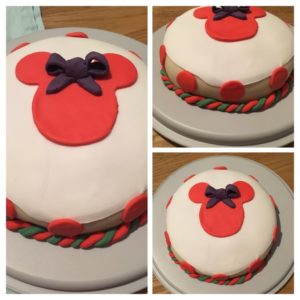 I also made another batch of the Christmas pudding fudge, bagged them all up and got gifts ready for people at work.

On Monday I popped into town after work to collect an order (I was meant to be having a massage but it was cancelled but I still needed to collect my order). I felt OK but then after dinner I felt a bit weird and went to bed feeling a bit under the weather. I think the germs at work were all catching up with me as occasionally I was feeling a bit dizzy and I was still getting over my cold.

I had promised to come to the club run on Tuesday because it is moving to Wednesdays so I won’t be going any more, but it was cancelled at the last minute. The weather was pretty horrendous with sideways rain and winds, and I nearly didn’t go, but as I was already changed and needed to wash my hair I thought I’d just do a short one to get some (very) fresh air. 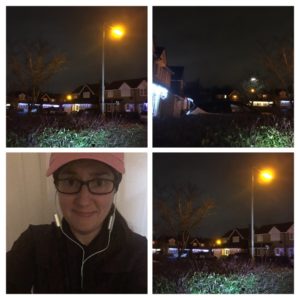 I got absolutely soaked through- this running jacket isn’t waterproof (I really need to invest in a good one I think) and I got splashed by a van driving too close to the kerb. I did find a street that reminded me of Home Alone as every single house had really pretty white lights, although the photo didn’t really come out. I had to peel my clothes off they were so drenched when I got home! 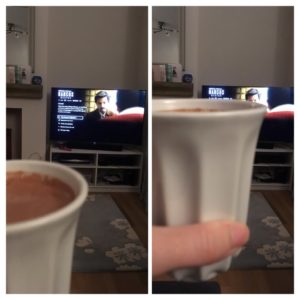 I had another short run on Wednesday, and in the evening we watched the final episode of Narcos and enjoyed a hot chocolate.

This week I’ve been cracking out my Christmas hats-  I feel like I probably could wear the Minnie Mouse one at other times, but the Rudolph one really only has a short window to be worn in! 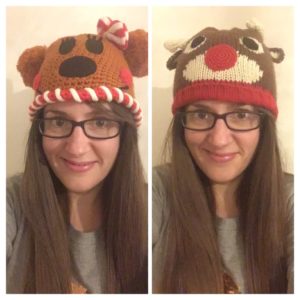 On Thursday headed back into town for the massage. It was the most painful once since my first one I think- the amount of crunching coming from my shoulders was awful.  I could move better afterwards, but I also have a few bruises on my back. The end of term stress is high!

Once home I had to pack, as I was being picked up on Friday after school to go straight to Heathrow as we were going to Berlin for a few days over Christmas. Of course everyone checked that we weren’t flying from Gatwick, and we felt pretty lucky that we were away from that chaos. 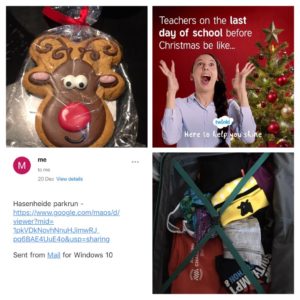 I’d emailed to myself the map of Hasenheide parkrun, looked up the directions on the train, packed my barcode wristband and cow hat- I was all ready. Literally 5 minutes after checking our bags, Andy got a text to say our flight had been cancelled. Argh!

This then turned into a massive palaver because we then had to get our bags back. I had to join a queue, use a phone, give the receipts to a customer service person, then get my passport (one person per party was allowed to collect the bags so Andy waited outside looking at flight options on his phone) and be accompanied into the baggage hall. It then turned out I had to go through full on security (if you ever wondered where they send the people who aren’t cheerful enough to work on the customer security, the answer turns out to be behind the scenes for the staff and lost baggage security…). If I had known, I would have left my rucksack with Andy, so I had to take off my boots, empty my rucksack, get out my liquids, all the time being overtaken by members of staff (some of whom literally took trays out from under me as I was about to put my belongings into them). I said to the person scanning that I didn’t have a bag for my liquids as I hadn’t been through security because my flight was cancelled, and the lady said it was fine as long as I left them in the tray. However, once scanned the man (who was about 2m away from the woman) told me off for not having a bag, even though I had just explained that I didn’t have a bag and that the lady told me it was OK.  He then stomped off to get me a bag, and then told me he now had to test the liquids . The lady who had accompanied the group of us had gone with everyone else and at this point I thought I was going to start crying- I find security stressful at the best of times and this was awful.  I had to wait in the security bit for ages before eventually she came back, and when I explained that if I’d known I needed to go through security I would have left my bag and coat outside, she said “oh don’t worry, I’m not in a hurry”- argh! That wasn’t my point!

In the baggage hall I had to join another queue at the customer service desk, to speak to the same lady again (I don’t understand the system at all)- she rang the baggage storage and our bags were released, so I had to wait by carousel 8. After waiting for half an hour and no sign of either bag, I went back to the  desk but of course there was no one there. After 45 mins Andy’s bag came through, and then it was another 15 mins before my bag appeared and I could go out of the baggage hall and find Andy. The entire process was 2 hours! I was feeling so thirsty and tired and I just wanted to sit down. This was around 6.30pm and Andy’s parents were heading back from Southampton and said they would pick us up (my Dad had driven us) so we had a bit of time to get some dinner. I had a very tasty toasted sandwich from Caffe Nero (it was vegan cheese, sundried tomatoes and basil) and we shared the gingerbread that I’d been given at work. After getting the train to Terminal 3 (where they were picking us up) we got a cup of tea. We didn’t get home until about 10.30pm as we had to be dropped off at my parents’ (where Andy’s car was) and then drive home from there.

This morning I went to Ellenbrook Fields for their festive parkrun- Dad and Tony cycled over and we ran around together. It was a gorgeous morning with blue skies- perfect for running. I went back to Mum and Dad’s for pancakes, so although not a Berlin parkrun, it was still a pretty good start to the weekend.

After a shower we walked into town to pick up the free gift from John Lewis (a little gingerbread biscuit) and I booked a haircut (which is so lucky I popped in then as my hairdresser had one slot left this week and then she goes on holiday until some time in February!). Then I chilled out in front of the TV, watching a load of things I’d recorded on the box including Liam Bakes, the Inside the Factory Christmas show and some Kirsty Homemade Christmas. I loved seeing the reflection of our Christmas tree in the door. I did a bit of present wrapping, and then in the afternoon made a pot of mince pie tea and warmed up a mince pie in the oven to enjoy. It may not be a German Christmas market but it’s still festive. 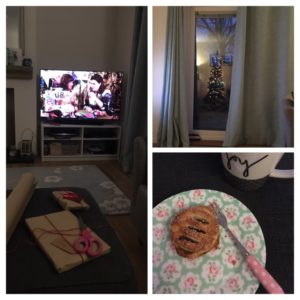 We are booked on a flight tomorrow, so fingers crossed nothing will go wrong!

How has your Christmas countdown been?  What are you planning for Christmas day?