On the last Saturday of 2018, Dad picked me up at 8am and we drove around to Gunpowder parkrun which is by Waltham Abbey (close to the Lee Valley park). It had been my NENDY for ages (nearest event not done yet) and Dad fancied it too, as we had spoken to a few people at Panshanger who were from Gunpowder. 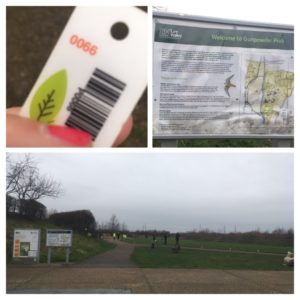 It was fairly overcast and with a cold wind, even though the weather was mild (maybe 9 degrees). We got chatting to a brand new parkrunner, and I ended up explaining the finish token system to her because there wasn’t a new runners briefing, just a normal briefing. We then walked a short way to the start, as the route was just over 2 laps.

The route was all on paved paths within the park, and very flat. There were a few signs in the park (I think about local wildlife) but I didn’t see anything about the Gunpowder mills- we had passed them on the way so I think they are perhaps not in the same place. Anyway, I was glad we had spoken to the first time runner as there weren’t any marshals out on the course either. I’ve seen this once at Black Park (they also didn’t have a new runner briefing), and I find it to appear less welcoming when events are like this. To me it’s fine because I know I will just follow the person in front and I know how the finishing funnel works, but at Black Park I was introducing my friend to parkrun for the first time, and I feel that without the new runners briefing and the enthusiastic cheers from the marshals, it feels less of a community event. I had explained to the new runner that there would be a tail walker, as she was a bit worried about completing the distance having only run up to 2 k at that point, and then I didn’t actually see the tail walker (having checked the results, the final runner got a volunteer credit so that must have been it). 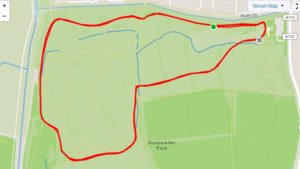 Anyway, neither of us were planning on going fast as Dad had a bit of a niggle and I was just wanting to take it easy. We ended up chatting but as we neared the end of the second lap I realised we were going pretty fast- my finish time was 27:16 which is very speedy for me, and a nice royal flush negative split of 9:10, 8:45, 8:20 and 7:53. Annoyingly I needed 17 and 18 for stopwatch bingo!

It did earn me my second G, and I already have 3 B’s which means I only need one more G to complete the Stayin’ Alive challenge!

We chatted a bit to some of the volunteers (Dad was admiring their token sorting system as they used little seed pots and had one pot for each token). After a bit of stretching we drove home via St Albans to pick up Mum, and then headed here to breakfast. I had prepped the night before some awesome baked French toast from the Pip and Nut recipe book (which is online here if you want to take a look). It was meant to be with brioche but I used panettone- you basically sliced it and spread one side with peanut butter, then put it in a dish with a mixture of eggs, milk, sugar (plus cinnamon), and scattered blueberries over the top. It soaked in the fridge overnight and then in the morning while we were driving back Andy put the oven on so it was cooking away when we got back. According to my dad it was a success, and there wasn’t any left which means it will be one I will make again. We had it with some extra fruit, optional maple syrup and some Oatly creme fraiche (which was really good).

If I fancied a super flat run I would probably head to Gunpowder rather than St Albans because it was much quieter (around 200 runners) and distance wise it’s similar, and if I was fed up with mud in the winter it would be a good option too. The car park was only free for an hour (thankfully we arrived just after 8.30 and the run had a prompt start), otherwise it was £2.50 so I think I would be tempted to look at nearby parking options and run the rest of the way to avoid that next time.

Do you have any prepare ahead breakfast ideas?