On Sunday morning we headed to the train station to board our (8 hour) train to Portland. It isn’t that far, but the trains in America go slowly (and give way to the freight trains too). We had big comfy seats and we had brought some food with us (no fresh fruit though as you can’t bring things like that across the border- just packaged snacks). On that point, the border is weird as unlike Eurostar where you go through passport control before getting onto the train (or lovely Europe where you just travel from France to Germany or wherever without restrictions), here the train stops just before getting into the USA, and immigration agents walk the length of the train checking everyone’s passports- seems so slow compared to over here. 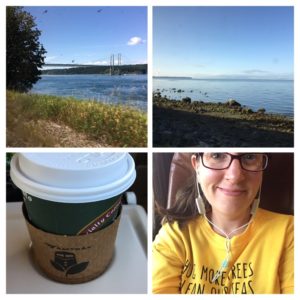 The train ride itself was really scenic, mainly hugging the coast- we saw loads of bald eagles and deer. We have done part of that journey before (to Seattle, which is further north than Portland) but the evening one, so it was mostly dark, so it was lovely to see the views. We could see Mount Rainier (a really beautiful mountain and a National Park) and in the cities we passed by big football stadiums. I mainly listened to podcasts and my headphones managed about 7 and a half of the 8 hour journey.

(And back to the upside down photos- I thought I had sorted it, and it worked in the last post- sorry!)- the hotel just loved pineapples! 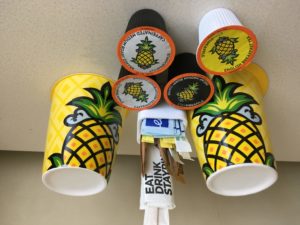 Once in Portland we dropped our things in our hotel and headed out to see the sights.

We had a lovely wander about, stumbled across an amazing looking cookie sandwich shop- you basically chose your cookie and ice cream flavour and could even have it dipped in chocolate if you wanted to. It was good! 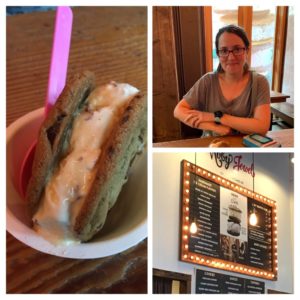 After that we walked along by the water for a bit- there were lots of restaurants and it had a good lively feel . 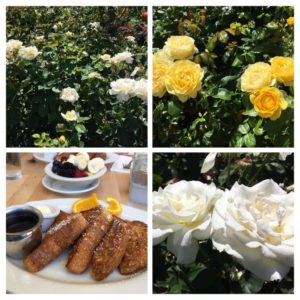 On Monday we went out for brunch (Portland is apparently a city that does brunch as opposed to having one dish that it is known for)- this place did French toast dipped in cornflakes for a lovely crunchy coating. We shared a bowl of fruit too. Then we headed off on a tram to Washington Park, a huge park with a zoo, arboretum, Japanese garden, rose garden, forestry centre and a children’s museum. Once in the park there was a free shuttle that took you to the part of the park you wanted to visit. We started with the rose test garden (which was free and had loads of roses growing as well as a few statues). From here there were lovely views across the city and into the mountains too. 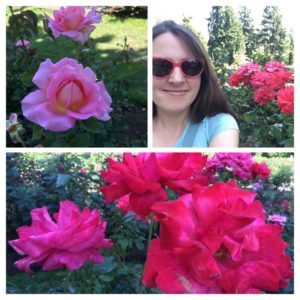 Then we went into the Japanese garden (you had to pay, and on Mondays they didn’t open until later for the public). It was a gorgeous garden- very calming and beautiful.

Once back in the city we had more of a wander. There was lots of cool street art (even the bins had cartoons on them) and there are scooters everywhere, and by everywhere I mean just laying in the pavements because they all work by an app so people don’t need to return them to a stand, they just leave them on the floor once done). We visited a few quirky shops (including a huge bookstore- Powell’s- an entire block of a book shop), a lovely little shop with local art and products, and then came across Voodoo doughnuts. Now, I am not a bit doughnut fan- I would not normally choose one, but Andy persuaded me to share one with him. 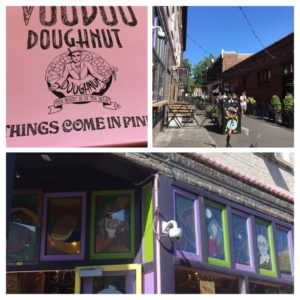 It was a peanut butter and chocolate one, and it was really good, with bits of cookie all over the top too. One to share was definitely plenty! 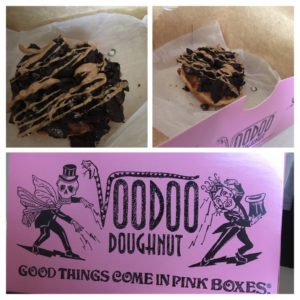 We finished the day with another walk by the waterfront- lovely. 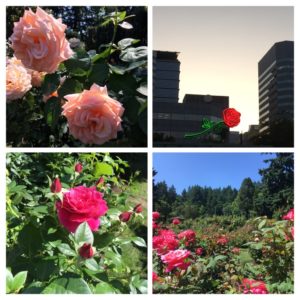 On Tuesday I went for a run by the water. I had read in the guides that Portland was the best running city in the USA, and I did see loads of runners, but the route I took wasn’t the best. I ran along the river, crossed over a bridge but then ended up running next to a huge highway so it was really noisy. You did have good views of downtown Portland across the river, and the runners were a friendly bunch, all waving or saying hi (some people even reached their arms across to deliberately wave in front of me, which I really liked). I think had we been closer to the big park in Leave No Trace (a brilliant film) then it would have been more my style of running route.

Then we had breakfast in our hotel as we had a voucher. I loved the plate- it suited me perfectly (I have a reputation of getting very grumpy when I am hungry…). 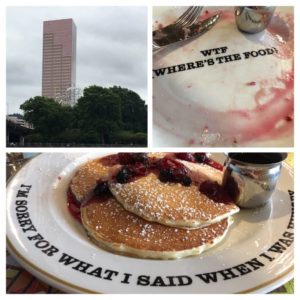 Then we checked out (tip- get a print out of the bill as it turned out our bill had dinners and drinks on it from another person who had clearly given the wrong room number… thankfully the hotel took it  off our bill) and headed to the airport to pick up the hire car. 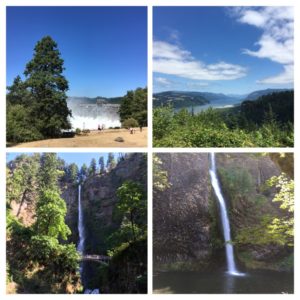 We spent the day driving along the Columbia river gorge, and it was stunning. Lots of gorgeous views of waterfalls and of course the river. Multnomah Falls was particularly stunning, with the bridge across the middle to really put into context how tall the falls were (189m)- bottom left picture.

We also stopped at a dam which had a really interesting visitor centre, inside viewing of the salmon ladder and even some ospreys nesting. Once we arrived at our hotel (in Hood River) I had a bit of a headache so we made a cup of tea in our room and then popped out to a lovely local supermarket and picked up some bread and hummus for a simple dinner, as I didn’t fancy eating out anywhere. 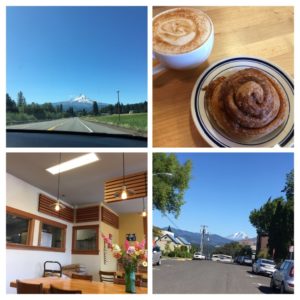 The next morning we went to the amazing Pine Street bakery as we had seen their amazing looking cinnamon buns, and then we drove into the mountains on our way to Bend.

We had a stop mid-way in a place called Government Town, which looked big on the map but was actually rather tiny, and then closer to Bend found a lovely lake to walk around, with views of the mountains (Mount Hood). 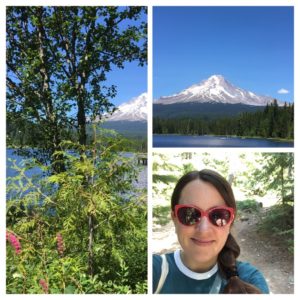 And then we had a long drive to Bend. We saw the aftermath of a couple of horrific car crashes (a few cars had driven head on into trees) but as we passed the ambulances, fire trucks and police cars were all arriving. It’s horrible to see, and a reminder to keep your eyes on the road even with all that amazing scenery. 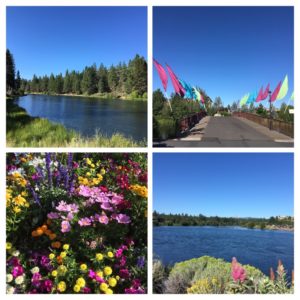 Once in Bend we had a little walk in the centre, by the river, before checking into our Air BnB- a lovely apartment close to the centre. It was nice to spread out for a bit instead of living in one hotel room. 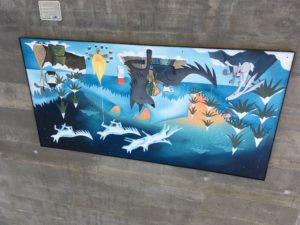 Bend had an art trail- including art on many of the roundabouts- in fact roundabouts are so unusual in America that they had a guide on how to drive on them in the welcome magazine!

Bend was a really great place to stay- it seemed to be a bit of a hub for people heading out to do various activities in the day.

The next morning (Thursday) I went out for a run along the river. There were loads of people out and about and the path went on for ages- I could have run much further than the 5 miles that I ended up doing. 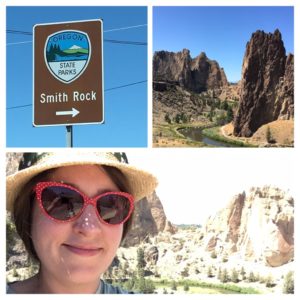 After breakfast we drove to Smith Rock state park, a canyon in the high desert. It was very impressive (but sweltering)- a huge canyon with a river running through the bottom. Lots of people were rock climbing, and there was some information about how it was one of the first places that people started rock climbing without ropes (or free climbing maybe). We saw a sign warning of a cougar sighting- eek!

On driving back to town we saw a Trader Joe’s and had to stop by for some bits. We’d been listening to the Off Menu podcast (if you don’t listen to it, then give it a go- each week someone is interviewed about their dream meal, and it goes off on lovely tangents about travel and food)- they were raving about Trader Joe’s dark chocolate almonds with sea salt and turbinado (no idea?) sugar, and so of course we had to pick some up. They are delicious. They also did mini pb cups with a fruity filling, sort of like a chocolate pb&j. Good stuff. 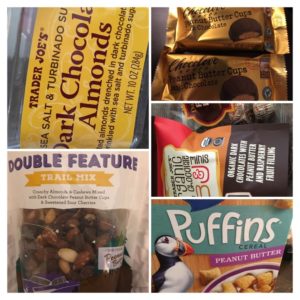 My mainly peanut butter based snack and breakfast items

We then walked along the river to the old town part of Bend, enjoying an iced chai latte (they make them super spicy in Oregon) and then some ice cream. As we walked back through the park, there was a little festival going on, with music playing and lots of stalls- it had such a great atmosphere and we mooched around some of the stalls for a bit. 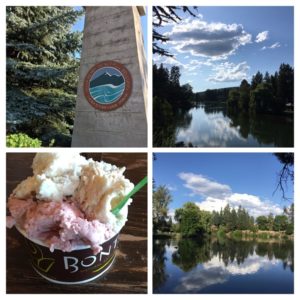 There were people tubing on the river (floating along in big inflatable rings) and we were tempted to give it a go. I was looking at the river and saw the head of an animal poke out of the water, duck under and then pop up again. I got excited thinking it was either an otter or a beaver, when a guy floating closer shouted “look at that snake!”- erm, nope I was not going in the water after that- if that was how big the head was, how long was the snake??

On Friday we checked out and drove to Crater Lake- the main point of our Oregon trip. We love going to the US National Parks and this one had been on our list (particularly Andy’s) for a long time.

Would you go in the river if you’d seen a big snake?

2 thoughts on “Portland and central Oregon”