I don’t drink coffee (and the bright orange Starbucks PSL does look rather day-glo), but the arrival of pumpkin spice season still excites me as I love a lot of things about autumn! 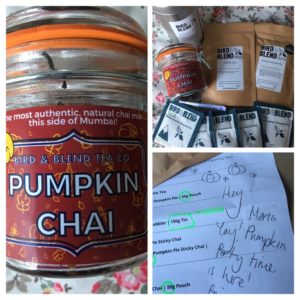 First up, Bird & Blend (my fave tea company) do a sticky chai, which is basically a jar of black tea, honey and spices, which you brew in warm milk to make the most amazing chai latte. Well, they released a pumpkin chai blend this autumn and it is absolutely gorgeous. 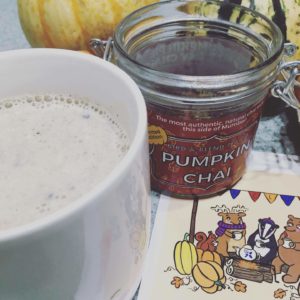 I have been having a cup some evenings and it is just perfection. Also check out the cute illustration on the postcard- each month (with the tea club) you get a little postcard with the teas listed on the back, and they feature a different artist each time. These animals are just too cute. 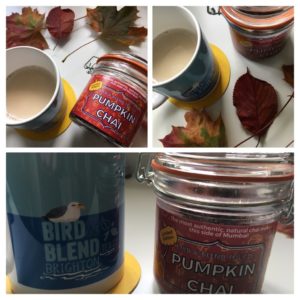 Then, Pip & Nut (makers of amazing nut butter with no palm oil) released pumpkin spice almond butter. Their last special was a cherry bakewell flavour, and I thought that was peak nut butter, but honestly this stuff is king. Maybe it’s the nutmeg? I don’t know. It’s just so good. 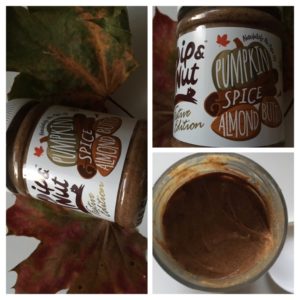 I also treated myself to a parkrun flatband. I had been wanting to get a new one for while, as my old wristband had my pre-married name, and as it’s for ICE I thought it was sensible to have my new name on it. I kept thinking about it, but couldn’t decide because I’d heard some of the new ones didn’t scan so well, and I didn’t like some of the colours. Anyway, the blue one popped up as a special one to celebrate their 15th birthday, so I went for it.

It came super quickly (I think I ordered it on the Monday and it came on the Thursday maybe). It’s a bit of a faff to put it on, with the barcode on the inside, but it can be flipped around so you don’t have to take it off to scan it. I do think it comes undone easily though so I don’t think I’d wear it all the time (I hear some people do). 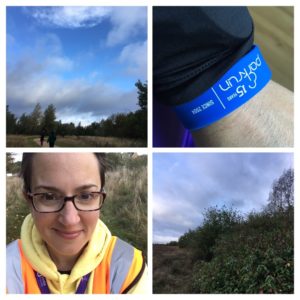 I was tail walking at Ellenbrook on the Saturday so I tested it out (with my old band on my other arm and my back up card in my phone case)- it scanned just fine- phew.

Tail walking at Ellenbrook was lovely- although it was chilly. I’d worn a long sleeved top, my purple t-shirt and then taken a hoodie to wear at the end, but in fact I kept the hoodie on the whole time and my fingers were really cold by the end.

After a quick breakfast and shower we were off to London as we had tickets to see Hamilton with Andy’s brothers and wives (eg he has 2 brothers and they each have one wife… not sure how else to word it!).

We’d seen it before so knew it would be brilliant, but the others hadn’t so it’s always a bit of a risk in case they don’t enjoy something that you have recommended. Luckily they all loved it too. 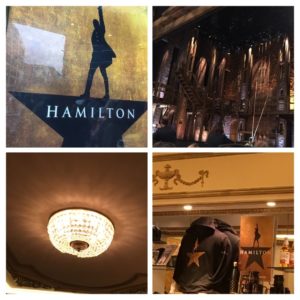 After we went for dinner ( at a place called Bone Daddies which is a horrible name in my opinion)- they did a vegan poke bowl which was just so good- sticky rice (not such a fan of that) topped with all sorts of veggies, pickled veggies, guacamole, crunchy carrots, crunchy noodles and sesame seeds. 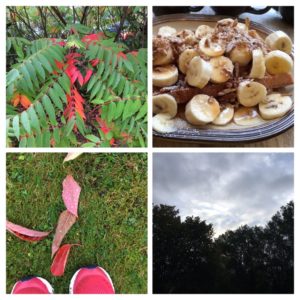 Leaves so pink they match my trainers!

On the Sunday morning the weather was forecast to be awful and I had to set an alarm because we were meeting my parents at The Waffle House at 11, but in the end it didn’t rain that much on my run. I ended up doing loops near my house because I knew I needed to be home by a certain time to have a shower and dry my hair, and in the end just managed 10 miles which I was pleased with (ahead of the 10 mile race the weekend after). A couple of times it bucketed down but only for a few minutes, and thankfully it wasn’t too cold so I was OK in my t-shirt.

I had a lovely pecan nut waffle with sliced banana, and it was so nice to have a relaxing start (well, second start) to the day, as my sister, brother in law and niece came along too. Then we popped by to see Andy’s parents for his mum’s birthday- a nice family day.

I do love seeing the leaves change colour and I don’t think I can go on a walk or run without taking a photo at the moment! I do not like the darker evenings- when I get home from work a walk is much less appealing when it’s so gloomy. But I am embracing the change (we talked about this at yoga last week) and am looking forward to purposefully slowing down a bit, cosy evenings, Bake Off, a bit more baking, and of course many sticky chai lattes!

Are you a pumpkin spice fan? What do you like about autumn?