In 2018 I ran the Wimpole half marathon, and I really enjoyed it, but there was a 10 mile race on the same route, only at 9 miles all the 10 milers headed off to the finish, whereas the half runners ran down (another) big hill, through some woods and back up the hill. This year I decided to opt for the 10 miles instead as I found that psychologically tough, particularly as I was in a pack of runners but once doing the final miles I was pretty much on my own.

The weather was forecast to be awful this year, but thankfully it wasn’t raining when we arrived. It’s a laid back race, where you pick up your pack on the morning. They’d asked for donations for a local food bank, so we dropped some things off, got my number and left my bag in the tent, all in about 10 minutes. They’d emailed out the race instructions because they didn’t want people standing around in the cold and rain for ages at the start- how sensible. 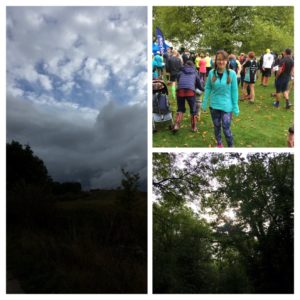 I kept my long sleeved top on until the last possible moment before the start! I did like that they had asked people to walk over the start line as there were huge deep puddles, so they played Chariots of Fire, which I think you have to run in slow motion to? 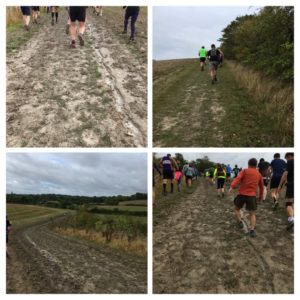 The race is rather up and down- as you can see it was very muddy and in some places you had to walk because it was so steep and the thick mud made it so hard to get purchase. At about 2 miles I was running along a ridge-line and it started raining quite hard- it was then that I remembered my visor safely in my bag in the bag drop…

The route kept looping near to the main house- from the three loops above we did the top/left one first, then the top right one, and then the lower loop, so some roads or tracks were repeated but in different directions. One part was so steep and claggy from the mud that I had to walk downhill which was really annoying!

On a few of the uphill bits I walked and took a few photos, as trying to run just seemed pointless as it was the kind of running where you were not going any faster but just tiring yourself out. The final mile had an out and back in a field with deep grass and bumpy ground- no chance of speeding up here as I didn’t want to twist an ankle, and when you turned back around you were running into the wind. 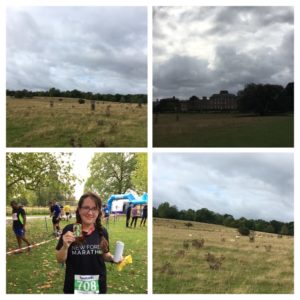 As runners finished, they were announcing their names, which is always a nice touch- someone close to the line was calling out the race bib numbers. I was handed a piece of home-made flapjack as I was given my medal- yes please! And water in a can (recyclable- thumbs up). 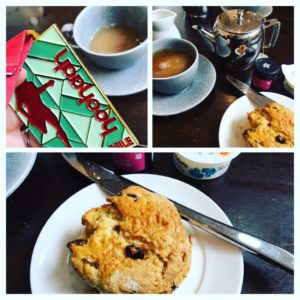 I changed in the toilets and then we went to the tea room- after being outside in the wind, rain and cold, that pot of tea was just perfect, and I got the last fruit scone!

I didn’t have any idea on my finish time- it was chip timed but we didn’t get a text or anything, and really it was about the run and not about the time. I guessed about 1 hr 45, so I was pretty impressed when I looked on the results and it was 1:46:36.