So this week was back to being in work all the time instead of the rota system we have had up until now. I did some yoga before heading in on Monday morning. 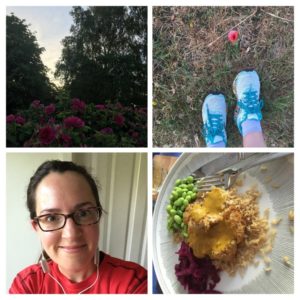 And if anyone says re-opening of schools, then please picture Ross from Friends as he screams “We were on a break“- because schools were never closed! Anyway, on Monday Andy made a katsu curry for dinner (using quorn pieces)- with lots of pickled cabbage and some edamame beans, it was very tasty (and I am not usually a curry fan). The weather was due to be warm and I didn’t really want to be running at half 5 in the evening, and I’ve enjoyed my early morning runs so far, so I decided to set the alarm for just after 5 on Tues, Wed and Thurs for early morning runs. As I need to leave by around 7.20, I could only fit in 4 miles, so no Tuesday 10k for me. I do like the start to the day- the first ten minutes after waking up I do question my sanity, but once outside and moving I feel so much better. I wasn’t sleeping much anyway so was often awake at that time, so I figured I may as well make the most of it. The bonus is that when I get home, we can have a pot of tea and maybe watch some TV, or have a walk and catch up on the day.

Although on Tuesday around 2 miles in I thought that my shoes felt strange, and I then realised I was wearing non-running trainers. The drawback of running at 5am perhaps. I felt totally mortified though because I posted a pic on Instagram of my shoes, and then saw everyone was doing a Black Out Tuesday in solidarity with George Floyd and all of the protesters. Everything felt so trivial all of the sudden- being at work I just had not thought about anything that was happening in the wider world that day. I signed up to the Brooks challenge where they are donating a dollar for each signup for the Equal Justice Initiative (their website also has lots of useful information). I listened to the latest JVN podcast where he talked to a DA about how they can fight police brutality and made good points about making sure you use your vote (council elections, the police commissioners as well as general elections). I thought a lot about the film Just Mercy (based on a true story of a lawyer trying to help someone on Death Row, linked to the EJI), which must be one of the last films we went to see before the lockdown. The British Podcast email had a collection of educational ones to listen to, and Change.Org sent a list of petitions to sign this week. But of course there is a lot more to do.

On with the rest of the week…

We found a Pudding Stop sticky toffee pudding in the freezer so shared that for pudding and it was delicious. 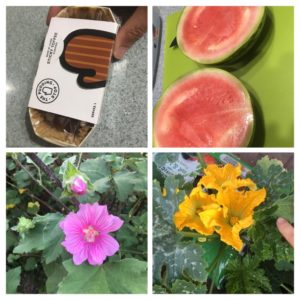 I was excited to see some big flowers on my courgette plants, and now we actually have some teeny courgettes growing too. 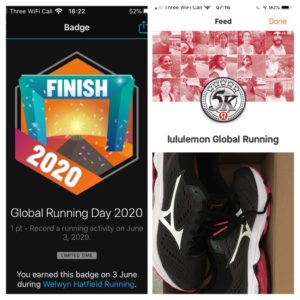 On Wednesday I took part in the global running day earning some Strava badges and also getting some shoes out of the box (I’ve had them for a while as I bought them in the sale). Yoga was back on, and I really enjoyed the session. I’d bought an eye pillow from the Hitchin Lavender farm, so had that on during the final relaxation and I really could have fallen asleep on the floor of my office. 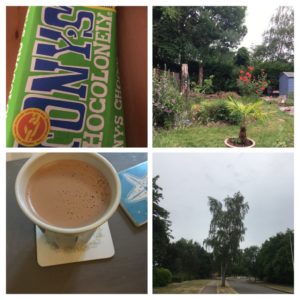 Thursday morning run scene and a hot chocolate for the evening

Despite the weather starting off warm, it was windy and rainy and cold- we have to have all the doors open at work (to keep the fresh air coming in) and even though I was wearing a thick jumper and long sleeved top (in June!) I was so cold, so once home and after dinner we had a hot chocolate to warm up. We also found this Tony’s bar lurking at the back of a drawer so opened that too.

On Friday a big box of packet of biscuits (the ones you get in B&B’s) appeared in our staff-room from some lovely parents. Now our planning time is on a Friday afternoon (due to the bubble system you can’t have another teacher taking your group) and I had an online meeting, so I headed home to tea and biscuits while doing the virtual meeting. As someone who is not great at technology I was quite impressed with how the meeting went. I’d made some sourdough the night before and shaped it in the morning, so that was baked ready for Friday night dinner too. 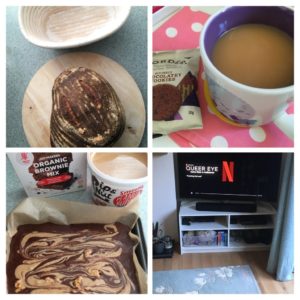 I also really fancied some pb chocolate brownies, but after the bread baking (and we went out on a walk) I didn’t really have time, so I used a mix from the Superfood Bakery, and just added some peanut butter to it. Then it was time for Queer Eye as the new series dropped on Friday- hooray!

I made the mistake of checking facebook after that, and saw that our local paper had reported that the clock tower was going to be lit up in purple for Black Lives Matter. A good thing, only you would not think that from the comments. I know you are not meant to read the internet comments, but some of them were so nasty (the people whinging that all lives matter-I liked one reply which was something like “save the whales doesn’t mean kill all other animals…”). And the hypocrisy of people complaining about the protests, when a few weeks before for the VE day weekend lots of people were out having street parties (when that wasn’t allowed) doing congas and all sorts… To be fair there were plenty of people trying to explain (leading to some heated arguments), but it did shock me the number of people who were perfectly OK with having their racist views on a public place like that.

How has your week been?

2 thoughts on “A week of early morning runs, and a lot of chocolate it seems”