We would usually go away on holiday in October half term, and had booked a few days this week, so before we had our long drive I had a short run to stretch out the legs, wearing my run Disneyland Paris top (to remind me of happier times…). 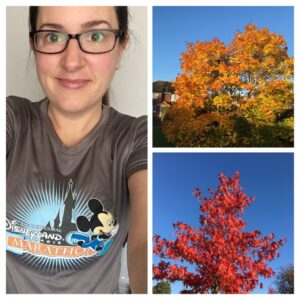 I find it a good time to get away because the first half term is so busy, but with parents evenings and assessments all due in the final week, there is not much work to be done in the holidays (versus other holidays with report writing or other tasks) so you can properly switch off. Google Photos keeps reminding me of trips- 5 years ago we went to Iceland, 4 years ago to Edinburgh and 3 years ago to Devon (we were meant to be going somewhere warm that year as it was Andy’s choice, and had booked flights to Croatia but then the airline went bust so we travelled closer to home instead), and the last 2 years we’ve been to Florida. As it’s now our wedding anniversary I think it is safe to say it will still be a tradition moving forwards. Andy had the week booked off, but we could not decide where to go- we wanted somewhere with lots of outside options as we are not going in to restaurants or cinemas or anything like that, and of course lots of places were booked. He found a cancellation of a self catering place in Cornwall so we jumped at that.

The journey there was fine- we stopped at the services to pick up lunch (they had a Pret- I was very excited) and had booked a slot at Stourhead because the autumn colours there are very pretty, plus it was around half way so ideal for a walk and lunch. 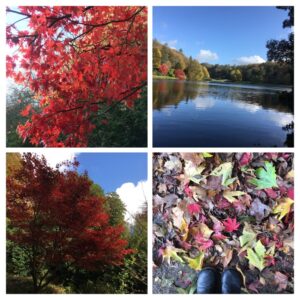 We were staying in a converted boat house on a lake- the grounds had some yurts for people to stay in too. It was so peaceful, and you could look out across the lake. It felt like somewhere that Bob and Paul would stay in for Gone Fishing. 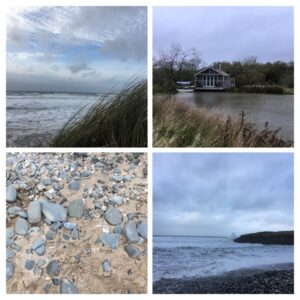 On Tuesday, Wednesday and Thursday we had booked a garden visit each day (2 National Trust places and the Lost Gardens of Heligan) and then around those headed to a town or the coast for a walk somewhere else. We had taken food with us (our place had a microwave and hob) so could be fairly relaxed about what time we headed out and back- no need to get to the shops or anything.

We were super lucky with the weather too. It poured with rain in the night, but when we were out and about it was generally fine- we had to shelter under a tree a few times, but we didn’t need the waterproof trousers. 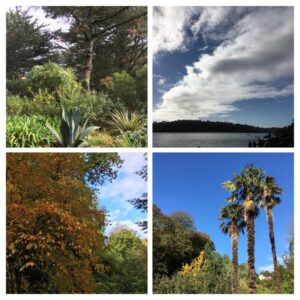 Of course I had my autumn sweater with me too! 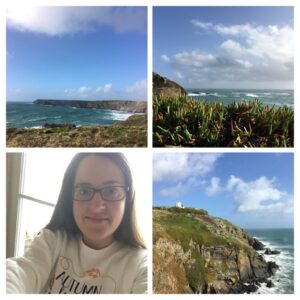 Wednesday- Lost Gardens and the wood burner on for a cosy evening. 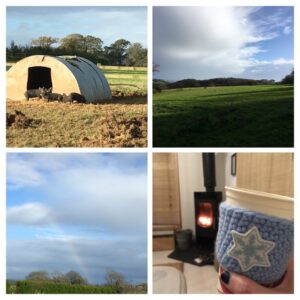 Thursday- gardens, awesome cinnamon bun (yes, we pack our own cups because often the cups in places like this are tiny and it is almost not worth using a teabag in such a small cup…). 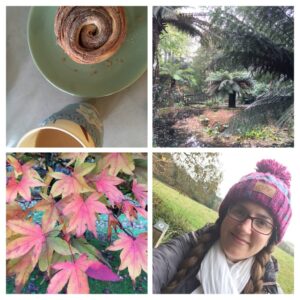 Then to St Ives, which was so busy – I dread to think what it would be like in the summer. After a bit (and finding a bakery with some amazing vegan options) we headed out to the coast for a more socially distanced walk. 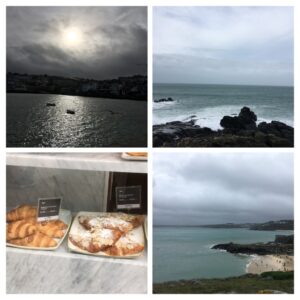 On Friday we had to head home, and the traffic was awful from the start. It took us 9 hours and we were so fed up by the end. It was a good trip, and we were lucky to have been somewhere, but that is a very long time. We have not been to Cornwall much in the past because it seems like such a long drive (and we could have seen lovely coast in Dorset/Suffolk etc), but thought we would give it a go. When we arrived after the  Monday drive (which I think was a little over 5 hours) Andy said that we could have flown to New York in that time, and of course on Friday it could have been to Florida!  When we were nearly home Andy said he had to make a detour to his parent’s house to collect something, and when he got back in the car he presented me with this box: 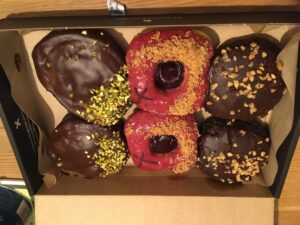 Yes, a box of Crosstown vegan doughnuts (pistachio, honeycomb chocolate and pear and blackberry). I was not much of a doughnut fan (although I think that is because I’d either had the big greasy supermarket ones, or weird dry Krispy Kremes), but in Portland last summer we had a proper one, and then when we went into London in February we shared a Crosstown one- these are something special- they use sourdough dough and they are not overly sweet or stodgy. Anyway, they have started delivering more than just to London, but not as far as us, but Andy’s parents were in the delivery area- how exciting! A pretty good wedding anniversary surprise.

Have you been to Cornwall?  Do you like doughnuts?