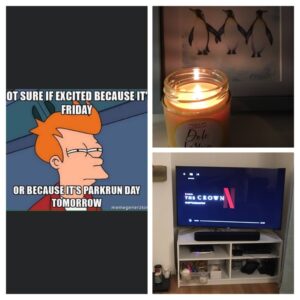 I am also missing that Friday feeling (see Fry above). There was a glimmer on the horizon as Junior parkrun might come back in the spring, so here’s hoping that real parkrun will come soon after- with all these vaccines being developed we must have hope. 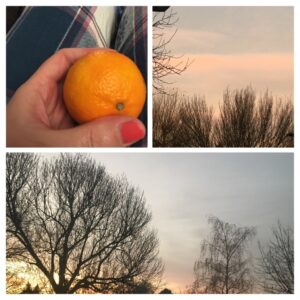 We also got some satsumas in our shopping- it’s always a bit of a gamble getting them delivered because I am a bit fussy and in normal times would pick them up in a real shop instead, but these one were good. 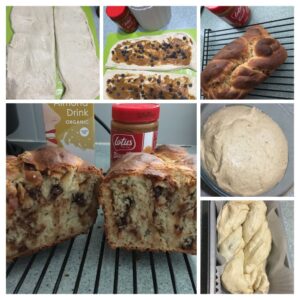 Last weekend I had another go at the vegan babka recipe for weekend breakfast- it’s a good one because I can make the dough on Friday night, leave it to rise in the fridge overnight, and then in the morning shape it and spread on the filling, and then Andy puts the oven on while I’m out (not)parkrunning, and then it’s baked and cooling while I have a shower. It’s good heated the next day too. I think this time I got the twists more accurate, although it’s a sticky dough so transferring it from the board to the tin is always very tricky. 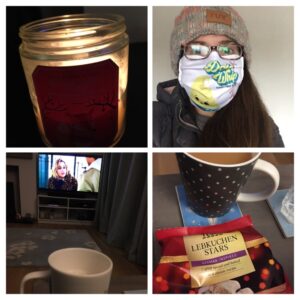 Recently Saturday has been a day of jobs, but I have been pretty efficient at getting all the cleaning and sorting done in the morning after my run, so we’ve often walked into town (usually when the weather has been OK) to get our Caffe Nero drinks, and of course maybe one of their delicious mince pies. I wore my Dole Whip mask for the first time after having bought it in the summer ahead of our DLP trips. (We’ve just had to cancel another one, as we had booked a couple of days at the start of the Christmas holiday, as they were meant to reopen, but now France has carried on with their lockdown so it won’t open until Feb 2021- impressive that we had annual passes for 2020 and did not use them for one day!). Anyway, it was very comfy and didn’t steam up my glasses. I think half my masks do, and half don’t, and I’m not too sure if it’s the fabric or the fit.

I fancied something easy going so on Saturday we watched Last Christmas. I am not one for holiday cheesy movies (eg I would not watch The Holiday or anything)- but this was less of a rom-com and more of a modern day Christmas Carol (ish). I mean, you can’t expect much from a film based on a song, but it was festive enough. 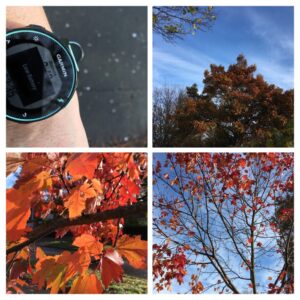 On Sunday the weather was meant to be terrible, but it was amazing! A cold wind, but such beautiful skies and leaves. My battery nearly ran out though (I thought I had checked the night before, but I think I’d actually checked on Friday)- thankfully it lasted until I got home- because if it’s not on Strava … (and I want to have 100 miles in each month this year as I’ve surpassed my original target of 1,000 miles per year a while back). 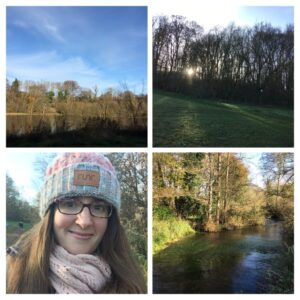 After breakfast we went for a walk in Panshanger, although it seemed like all of Hertford and WGC had had the same idea- the car park was rammed! Luckily it’s a huge park and the fields tend to be busy with dog walkers, so we walked the parkrun route which was fairly quiet. I did see lovely Donna from my running club- she was waiting for her partner to finish his run so we had a brief chat (and I was wondering if that was allowed?). 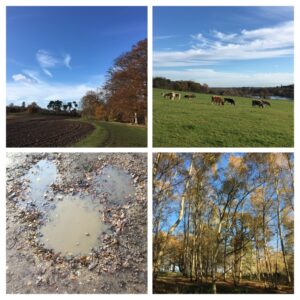 At one point I saw this puddle and went “oooh look”- Andy thought I had seen something exciting, and was very disappointed when it was just a puddle shaped like Mickey Mouse. I did point out that even if I had seen a woodpecker he wouldn’t find it exciting, not sure what he was expecting! 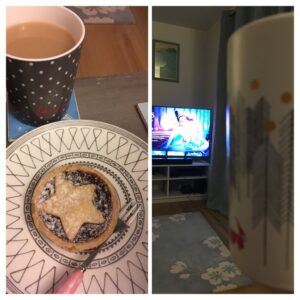 I baked another Christmas cake and then had tea and a mince pie while it baked. Andy was watching a podcast, so I decided on a chai latte and a Disney movie- this time The Princess and The Frog. It’s got such good music, but the sad bit is still so sad (not quite Pixar level).

Are you watching Christmas movies yet? And if so, which ones?

1 thought on “A more successful bake and a walk in Panshanger with a hidden Mickey!!”