Sorry not sorry. I love a pun and I love the snow (so long as I don’t have to go anywhere).

For the last few weeks we kept having snow forecast, and then it would come to nothing, either falling as sleet, or settling as the tiniest dusting that was gone in about 5 minutes.

Last weekend yet again it was meant to snow Saturday night-Sunday morning, so I planned a run to Panshanger park so I could run around there in the snow. Well, when I woke up, everywhere was white, but from frost not snow. 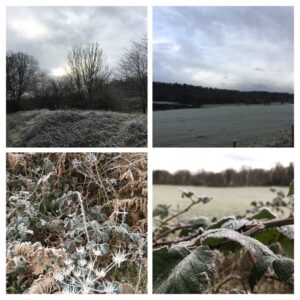 It was so beautiful, although hard to capture in photos because the sky was so white, getting darker grey as I ran around. Seeing the brambles and berries all covered in frost was so pretty, so I did keep stopping to try and get a better photo. 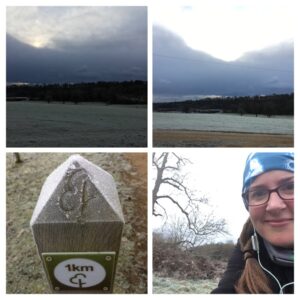 I did feel a bit sad seeing the parkrun signs- I can’t believe that it’s nearly a year, and of course will be well over a year of no parkrun whenever it returns.  I loved the run though, and as I got home it started to try and snow- when it is snowing about one flake every minute and you just wonder if you are imagining it. 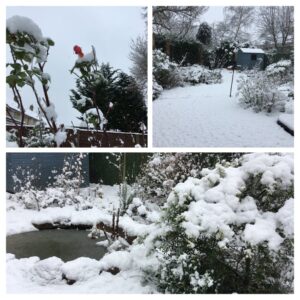 It began settling a little, and after I’d had a shower and breakfast it was super deep. I was very excited- I love snow! So once I’d dried my hair I headed out into the garden to make a snowman. 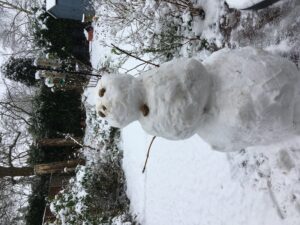 Lifting that middle ball of snow up was quite tough! Building a snowman is a good workout! 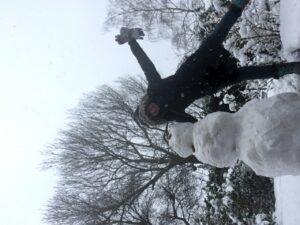 I couldn’t quite get it as tall as me, but nearly! 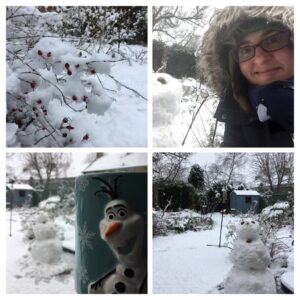 The rest of the day was spent relaxing- we had a family zoom call in the afternoon and got to hear about how everyone was enjoying the snow. I did some baking, we watched some TV and had a roast dinner )nut roast with veggie gravy and veggies and waffle fries because they are potatoes too). I had frozen the leftover red cabbage which we made a few weeks ago, so heated that through. 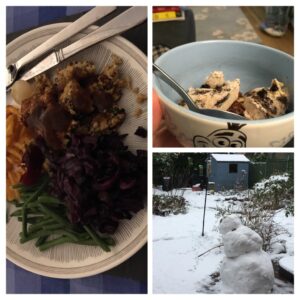 Sadly the snowman began to do some yoga (my instructor likes to say “take a little back bend” and I think that’s what it was doing) and then it’s head fell off. 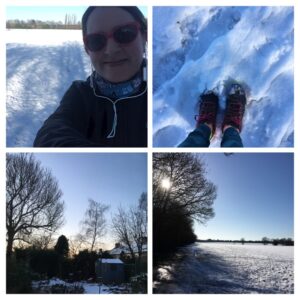 After just getting into the swing of my new routine, the snow slightly thawed and then froze solid overnight, so an early run was not an option. I headed out for a brief run at lunch time instead, running (well, walking mainly) to the local park and then running a few laps in the snow. I thought I would run through the woods, but the paths were super slippery as I think the snow had dripped from the trees and then frozen on the ground, making the normally muddy and uneven paths like ice rinks. 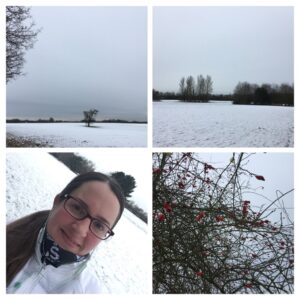 On Tuesday evening the rain washed most of the snow away, so by Wednesday morning the pavements were OK for an early run again. There were a few dodgy bits that needed walking over, but mostly it was fine. 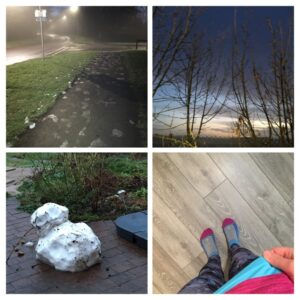 My snowman was still hanging on. I took a photo of my running outfit as I noticed after I put it on that my top and jacket perfectly matched my socks!

By Thursday all that was left was a pile of stones and sticks on the patio!

Do you like snow? Did you have lots of snow last weekend? I am very happy so long as I don’t have to drive in it!

2 thoughts on “Snow much fun!”