It is so much lighter in the mornings and evenings now- this last week it has been really noticeable. 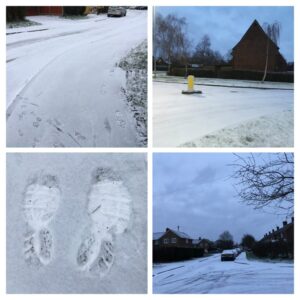 I was very surprised on Monday morning to see more snow- after my winter run on Sunday it had sleeted a bit, but nothing had settled for very long. The pavements and even the side roads were covered, but as it was still fairly fresh it was not slippery, just absolutely freezing. 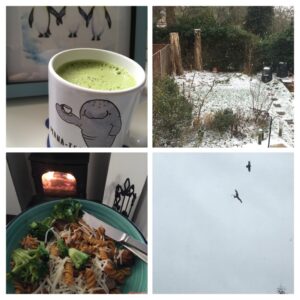 Of course matcha time, more snow, the red kites and dinner by the fire.

I am getting into the swing of online teaching although I had a lot of training sessions to get through which made fitting in everything else a bit of a challenge. It’s been good to have dedicated mini breaks in the day (eg a 10 min break mid-morning to make some matcha) to make myself look away from the screen and move about a bit. There is often one red kite flying outside the window, and I caught it being worried by the crows, and later in the week saw two flying together. No matter how many times I see them (and it’s pretty much every day) I am still amazed by their size and colours. It snowed more in the day, so we treated ourselves to the wood burner and had an easy pasta dinner so we could eat in the living room. 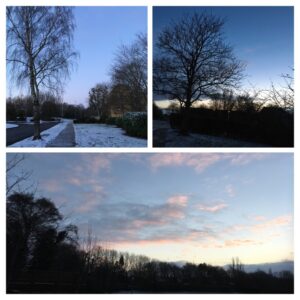 On Tuesday the pavements were icy in places so I did a very slow 4 miles. 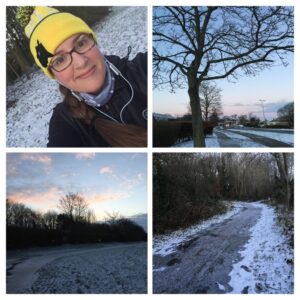 I was sooooo cold when I got home, and then had more training sessions so was more sedentary than usual by the end of the working day. I’ve still been doing a short yoga session, but I felt the need for a longer one, so carried on with the Yoga with Adriene from 2020 (I got about half way through I think)- a 40 min session that was really helpful.

We’d been watching It’s a Sin and finished it that evening. I thought it was an amazing piece of TV, so hard to watch but so well written. I did really want some writing at the end to say how things have moved on since then (eg how there are medicines that can help, whether the protests did anything etc). 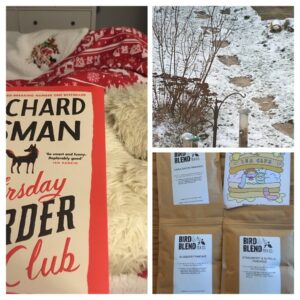 My B&B tea club arrived with the cutest postcard ever (Sugar and Sloth- they have an Etsy shop filled with cute drawings), and I ended up in bed with a hot water bottle, reading my more light-hearted book after the heavy going TV. 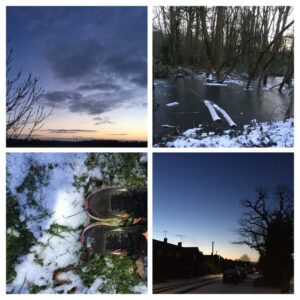 On Wednesday the snow was still there! So much of the woods were flooded, and the colder weather had meant it had frozen solid- very strange seeing frozen forests like that. The pavements were OK in places but slippery in others so again, a cautious run. 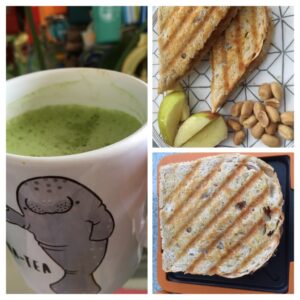 I made myself a toasted sandwich (peanut butter, banana) as something warm at lunch time, and to keep me going through another training session (they all seemed to come at once!). I also got the exciting news that my parents had been given their first covid vaccine- I actually got a bit teary when I saw their message. I know that they won’t even be a bit protected for a bit, and obviously need their second dose for it to be properly effective, but it’s a step in the right direction.

Wednesday night is yoga night, and I was really looking forward to it again. We have been doing a yoga nidra session at the end (you just lay on your mat with a cushion, blanket etc, and listen to the teacher)- I usually drift in and out a bit, but I properly fell asleep 3 times in those 30 minutes! Even though school has been going from home, I was still as tired as I would have been after a normal half term! 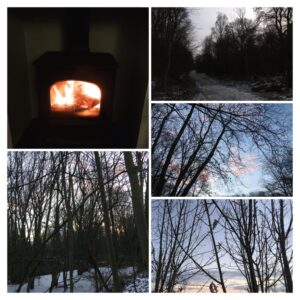 Thursday was yet another frosty and icy run, but it was so light in the morning too. We had the wood burner on again in the evening and started watching The Pembrokeshire Murders, which was interesting (based on a true story, with a bit of a Broadchurch vibe). 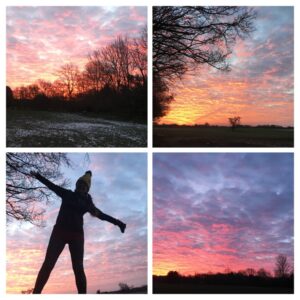 And then it was Friday, and nearly half term. As I left home, it looked as if the trees were on fire because the sun was coming up. I just kept on stopping to take photos- the sky was so many amazing colours, and it was just such a happy run! Spring is  around the corner, half term was ahead of me, I was happy to be out running, and yes it was freezing cold but I was wrapped up warm and just loving the views. 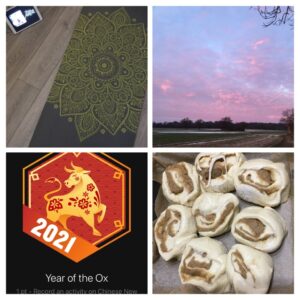 The day ended with a bit more yoga, a shower, face mask and hair mask, and then prepping cinnamon rolls for weekend breakfasts and snacks. I used a new to me recipe from Domestic Gothess which involved something called the tangzhong method (basically making a bit of a roux with flour and milk before making the dough)- a bit more effort but they turned out amazingly soft and fluffy. 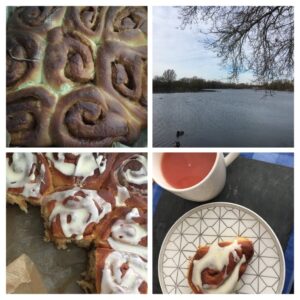 So delicious. After breakfast on Saturday we headed on a walk to the lakes (where part of the lakes were frozen solid) and then into the town centre to see the fountain, which had partially frozen. It was something I would expect to see in Iceland, not in the UK. It was pretty spectacular. 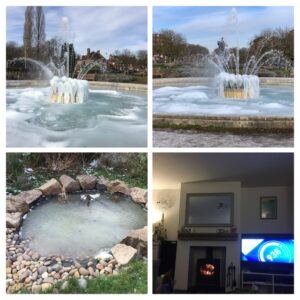 Our pond had also frozen over but not quite as dramatic as the fountain!

In the evening we wasted hours of our lives watching Greenland- thinking it would be a sort of good fun “let’s save the world” movie, but in reality it was just terrible and predictable and fair enough the special effects were OK, but the main(adult) characters were not even likeable and you just didn’t even want them to be saved.  At least we had the final of The Masked Singer to look forward to after!

Have you seen anything good on TV lately? Or watched any good films?

How have you coped in the cold weather? I prefer cold and sunny to rainy and grey, but the icy pavements are not so good.

2 thoughts on “Another snowy week and chasing sunrises”