I didn’t really notice until I was chatting to someone and mentioned about a few of the subscriptions, and I realised that I regularly use quite a few. 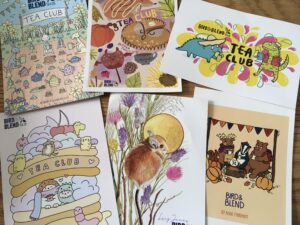 Bird & Blend tea club. This comes each month ( but you can pause or cancel very easily)- you get 3 varieties of loose leaf tea (your first order has a tea measuring spoon and tea sacks too)- either caffeine free or a variety. They are usually seasonal- eg in January they had a sort of “relax and self-care” theme for the teas, February there were pancake teas, next month will be Easter themed teas. They also are accompanied by a postcard with art- the Feb one from Sugar and Sloth was totally adorable and now I can’t stop scanning their Etsy page!

Vegan Kind Lifestyle Box. I signed up to receive a box a month for 3 months, but I think I’ll extend it as I really like the variety. Each box has a selection of sweet and savoury foods/ snacks, plus other items (eg vegan floss), and a recipe card. Some of the products include discount codes, and there are some things I would seek out again, and others I am glad I have tried even if I would not have them again.

Hotel Chocolat. I used to get a box every 3 months, but they have changed the way their subscriptions work, and so I have kept on putting it back. They also mentioned a vegan option late last year, but so far that hasn’t materialised so I am keeping it on hold until they get some better options. 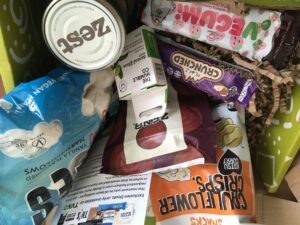 One of the Vegan lifestyle boxes 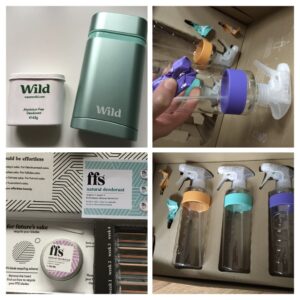 Wild. I have switched to this natural deodorant/ anti-perspirant and I am really happy with how it works. It’s aim is to cut down on plastic too, so you get one case with your first purchase, and then they sent out refills (which are easy to delay if you don’t need them). The refills are in card which you slot into the case, so zero plastic and waste.

FFS. I subscribed to these after becoming more and more frustrated with the amount of plastic and waste in traditional razors. Your first pack has the razor handle, and then they send out packs of razors (again as often as you like, or delay the re-send very easily)- you send the razors back to them when you are done and they recycle them.  They also do a solid anti-perspirant which I do like, but comes in a tin and I don’t really like applying it in that way. You can get £5 off your first order here (and I would earn some loyalty points).

Bamboo toothbrush head. I have an electric toothbrush but again the plastic is just so bad. I’ve done a subscribe and save on Amazon, so they send out a pack of 2 heads, made from coconut fibres and other recyclable things (LiveCoco), twice a year. You can send the heads to the company for them to be recycled.

Smol. This time last year I joined a few vegan facebook groups (helpful for recipes, supermarket finds and so on) and learnt that “normal” washing tabs and fabric softener are not suitable for vegetarians or vegans as they often contain animal fats. Coupled with the plastic in the tabs meant I started looking for an alternative. In the end I went with Smol and I am really happy that I did. They they do dishwasher tabs, bio, non bio, fabric softener and surface cleaners. The surface cleaners are brilliant because you add a little tablet to their bottle and top up with water from your tap- helping reduce emissions as the water isn’t being transported everywhere too. Our recycling bin used to get so full so quickly of plastic bottles from shower sprays and things like that. They are very easy to re-order if you need them sooner, or to change the amount and so on. Plus they take up a lot less space in the cupboard which is always a good thing. You can get a free trial here (and I would get a small discount on a future order)

Who Gives a Cr*p.  Did you know that more people in the world have mobile phones than toilets? I learnt that from the wrapping on the toilet paper. The company not only make vegan toilet paper (again, something I learned recently is that the glue might contain gelatine and so on) without dyes, but it’s recycled, no plastic is used in the packaging, and they donate 50% of their profits to help build toilets and improve sanitation in the developing world. Be warned that it comes in a very big box with the company name written all over it! But, no worries about running out while everyone in the country is panic-buying!

I think I am signed up to more than I realised! Do you sign up to anything like this? Someone at work mentioned a flower subscription which seemed like a lovely treat.