I had so many memories popping up this week (facebook and google photos) of past Brighton marathon weekends- crazy windy weather one year, so warm another year- medal pictures, the pre half parkrun tourism on the Saturday, breakfast out after parkrun, wanders by the sea, lunch out after the half marathon….

I had switched my long run to Saturday, and was going to run 8-10 miles, but once I was out I felt good, and I started pondering the fact that I’ve run a half marathon in February for many years in a row. (I did do Cambridge instead one year, which was in March I think, but I think I still ran the distance in training in Feb). So of course I ended up running 13.1 miles on Saturday. 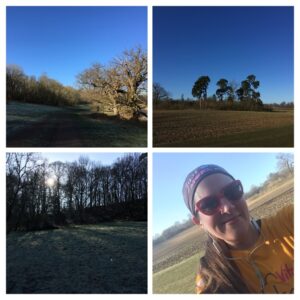 It was super frosty first thing, and I was glad of my long sleeves. I had lots of stops for photos and that sort of thing, so it was not race pace, but very enjoyable. I did have a slight panic, as just as I was getting into Panshanger park itself, I realised it was 9am, and parkrun have asked people to stay away from the routes at parkrun time (plus I was wearing my apricot top- I don’t wear it on long runs usually). It was very full of dog walkers, but I didn’t see many runners about and the paths were fine in the end so I needn’t have worried.

Breakfast once home was baked crumpets (sort of like baked French toast? Soaked in a mixture of oat milk and chickpea flour plus berries, and baked in the oven). 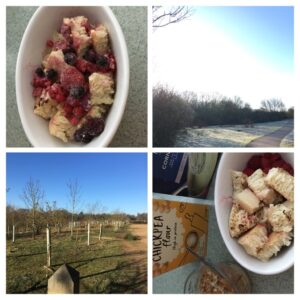 After a shower, it was time to help Andy build the new wardrobe, plus do bits of cleaning etc (not quite as exciting as a weekend in Brighton!).

I did make myself a chai latte, as in Brighton I would always pop to Bird&Blend to get a drink, and then we made our own version of the Leon Love burgers for dinner.

We watched the Beastie Boys Story, which was a recording of a live show with two of the band members talking through highlights of their career. I always enjoy a music documentary and this was different (as it was a recording of a show, not a traditional doc) and very interesting. 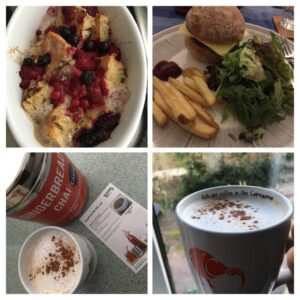 As I had been for a run on the Saturday, I had Sunday as a rest day, so I could “spend” my once a day exercise token on a long walk with Andy. We had pancakes (not the same as Café Coho ones, but a good substitute, and come to think of it their pancakes probably aren’t vegan so I’ll need to find a new breakfast option for when we can go there), then headed out on a 5 mile walk. We did a click and collect at Caffe Nero to get a drink for the walk home.

Once home it was time to do more fun jobs like build more of the wardrobe, potter about in the garden and do some baking- I made Nanaimo bars which were very tasty- enjoyed one in front of a live podcast recording. 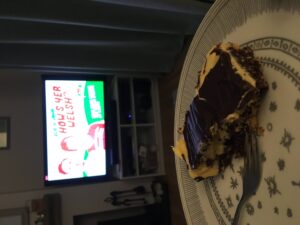 So, it may not have been the Brighton half marathon weekend, but I still managed to tick off some of the things- half marathon, pancakes, chai latte, a long walk. It will have to do for the moment.

What would a typical weekend away look like for you?

1 thought on “Not the Brighton half marathon weekend”