I didn’t have a run on the Monday as I wanted to get in to work earlier than usual just to set my mind at ease. 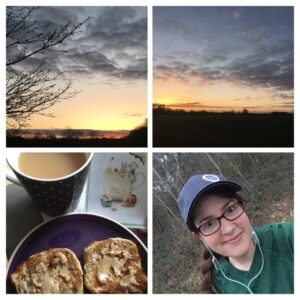 My treat for making it through the day was a hot cross bun and tea when I got home- very much needed as I had forgotten to bring my lunch with me!

I went on an early run on Tuesday, Wednesday and Thursday (around 3 miles each time)- by Thursday it was sooooo windy and was pretty hard work. Rain was forecast on Wednesday but luckily I was home before it really started (no time to wash my hair so didn’t really want to get my hair wet on a run). 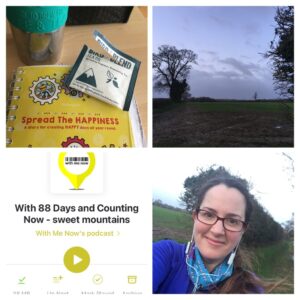 The best pod for my run, and the best tea to help me through some tricky work- got to make it in a travel cup though as not sure about using the cups from work at the moment.

It’s so light in the mornings now though- I love it! No need for a torch even for the first few minutes. It’s still lovely and empty- just me and my podcast and nature.

On Wednesday evening I had yoga as normal- I must have been more shattered than I thought, because in the yoga nidra I properly fell asleep (I usually drift in and out a bit) and woke up later with the “this zoom meeting has ended” message on the screen! Whoops! 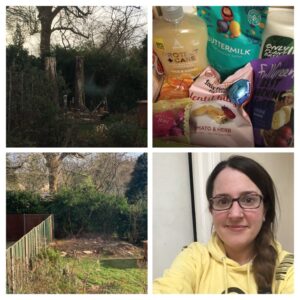 New vegan box for March- those peanut m’n’m’s are so good, tree trunks going and a windswept look after teaching PE outside!

On Friday the rotten tree trunks in our garden were being removed (Andy sent me a picture)- it’s made a huge difference to the garden. We’re going to put in some nice trees like silver birch (my fave).

I drove to Mum and Dad’s after work, and we had a lovely (not)parkrun together, over fields and again very windswept but really good fun.

On Friday night we rented a doc called Sour Grapes- all about fraud in the wine industry (made me think of the most recent Sneaky Pete series).  It was interesting enough, but also madness the money people were spending on wines to just sit in cellars. 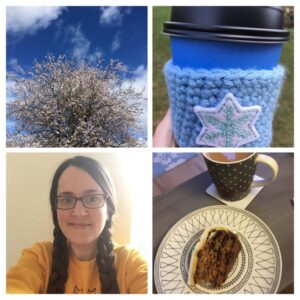 On Saturday we had the final Christmas panettone, baked in the oven (baked French toast) and then had a lovely spring walk. Hair in plaits is the only way when it’s still so windy! I spent my life detangling my hair at the moment. It’s coming up to 15 months since it was cut, and the thickness is just a bit crazy. We got a click and collect drink for the way home, and later I finished our Christmas cake. 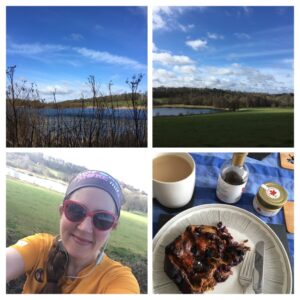 Sunday was time of course for another long run- I went along an old railway line for a bit of it, and then headed back to Panshanger park and then home through the fields. I feel so lucky to be able to run so far with only such a short section on roads (the first and last half mile). Beautiful weather, but I’d had a bit of a stiff shoulder and back, and a few times had to walk to stretch out a bit. Enjoyable though. 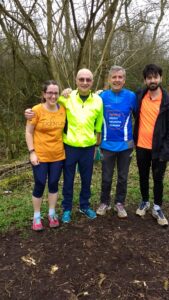 Me, Brian, Dad and my brother at Linford Wood parkrun back in 2017

I had memories pop up of my visit to Irchester Country parkrun with Dad, this time last year. I did my i, completed by UK parkrun alphabet, met the lovely Mary who was RD, and I think we were all aware that it would be the last parkrun for a while, I don’t think anyone imagined it would be this long. The 5th June is there, in the distance, and hopefully we make it. I also had a lovely email from Brian (my dad’s cousin) who got into parkrun when we met him at Linford Wood parkrun back in 2017 (for some reason, we thought he went to it already, but it turned out he only went there to meet us there). Anyway, since then he’s turned into a huge parkrun fan, doing lots of runs and volunteering. He’s been on 97 since the pause, and so was messaging us about celebrating his 100th! Hopefully we will get to do that this year.

On that note, parkrun have issued changes to the milestone t-shirts (from September). Basically we will have to pay for them now (overseas people had to pay for postage anyway), and they are introducing some more volunteer ones (and  run 25 I think). I was relieved to see that the colours are staying- I’m only 15 away from 250, and green is my favourite colour, so I am really looking forward to that. Also, you can re-order a top if it wears out/ shrinks etc. I might re-order my 100 top, as I ended up getting the wrong size (in that I chose it- I really liked the Tribesport fit, and the old Apricot ones, and then by the time I could claim my 100th- after doing my 150th run- they had switched supplier, and although I followed the measurements, it ended up being too big really).

What I would like is a sort of “pay it forward” aspect- eg I would be happy to donate for one other person to get their top if they could not afford it. I read a few people suggest this in the comments, and they were generally met with “well just donate to parkrun forever then”. Well, I do that, but it doesn’t mean that someone can get a free t-shirt if they can’t afford the cost. Edit- Danny Norman from With Me Now pod did an excellent live interview with Nick Pearson on their facebook page (you can still watch it after) which answered those queries and more and is well worth a watch.

Are you happy with the new changes to the t-shirts? What do you remember from parkrun this time last year?

2 thoughts on “What a windswept week! And parkrun memories…”