After our washing machine broke the other week, we found one for delivery at the start of the holidays. 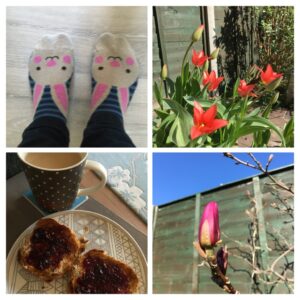 Bunny socks for the Easter holidays!

I had to wait in for it, as Andy had meetings all day so could not be letting them in. Thankfully it was warm, as the delivery instructions asked for doors and windows to be open. I sat in the dining room and got on with some work while I waited. The instillation was OK (we’ve got rid of the old one which was built in, and cut out the cabinets so that it could host a freestanding one, but we knew it would be a tight fit), and then Dad came over for a run together. I’d worked out a route that was around 3.5 miles, so a little over a (not)parkrun. It was so warm- I was glad of my hat- and it reminded me that I’m not a big fan of afternoon runs as the weather heats up.

Once out of the shower, of course it was time for tea and a hot cross bun.

In the evening, we watched Grace, which was a detective series on ITV, based on the Peter James books. They are all set in Brighton, and the series had been filmed there (I say series, I think it was a 2 hour thing?)- it was so nice to see them walking by the Hove beach huts, and at one point they even came out of the Flower Pot Bakery (which is home to the most amazing vegan chocolate almond croissant). It did make me really wish I could head there sometime soon. 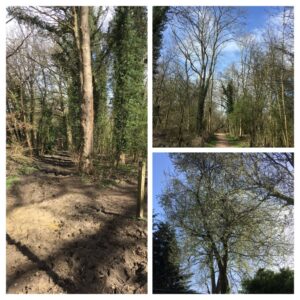 On Tuesday I had arranged to meet a friend at the lakes- we have tried about 3 times to meet up, but keep having to cancel due to lockdowns/ tiers/ self isolating. Well, we actually made it this time!

I walked the long way through the woods, and at one point a couple of cyclists were heading towards me as I was coming to a gate. One of them waved, and I went to hold the gate, before they said “Maria”, and I then realised it was my dad! He was out cycling with a friend, and just happened to me along the same path. 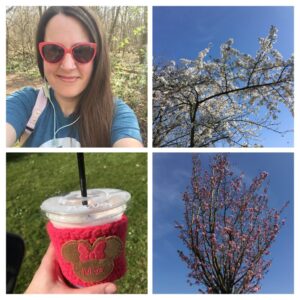 I met my friend and we walked around the lakes, and then I thought I would head home via Caffe Nero, as by this point I’d been walking for hours and hadn’t taken any water with me. I got an iced drink, and when I got home and checked my watch I had walked just under 10 miles. I still can’t quite work out how it was that far (it was around 4 miles on the long way to the lakes, and we did walk around them but they aren’t big).

Once home I did some more work, while I rested my legs! 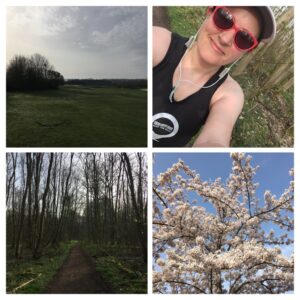 Wednesday felt like a Friday to me, as it was Andy’s last day before he’d taken time off over Easter. I headed out on a rather warm run first thing, did a bit of work, and then made some hot cross buns. 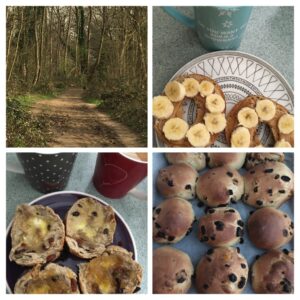 I saw a deer on my run- bagel, pb and banana for breakfast, and hot cross buns- although no cross- seems a waste of flour and once I got told off by someone for having one on the wrong day. However, after some googling it turns out that they originate with the pagan festival of spring, celebrating the goddess of dawn and spring- Eostre, with the 4 sections either being the 4 phases of the moon, or the 4 seasons. Anyway, I think that is a nicer image to think about rather than a crucifixion when you are eating something…

I wanted to try a new recipe as we are going to make them in school after the holidays, so of course it’s vital to research that the recipe will work! Thankfully it did (from Domestic Gothess)- sometimes the dried fruit burns so easily but these ones were all good. 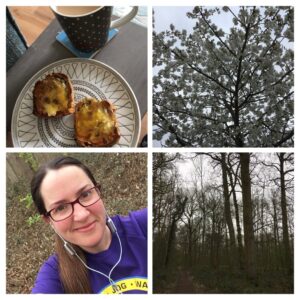 On Thursday I did a 5 mile run, then made simnel cakes for Andy’s parents and for his brother. In the afternoon we walked to the park and met his parents and our niece and nephew, before meeting them back at ours (we had to walk fast while they walked back slowly to the car) for a little Easter egg hunt in our back garden.

On Friday I decided to try a new path that I’ve seen in the woods but wasn’t quite sure where it ended up. Last year I did quite a lot of exploring local paths during lockdown, and although I have a terrible sense of direction and often get lost, I quite enjoyed doing little out and back routes along new paths, then after a while working out new routes when I realised where they joined up. I had looked on Strava and could see a path that should meet up with a route that I do, so I headed there and have managed to add it into a 4 ish mile route. The new path was quite boggy and muddy, but I think after a few weeks of drier weather it will be OK. 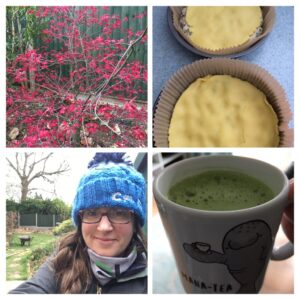 I then spent most of the day in the garden- touching up the green paint on the fences, sorting out the weeds and generally tidying up a bit.  I did enjoy it as when you are up close to the flower beds there are loads of buds and new growth. It was freezing cold though! 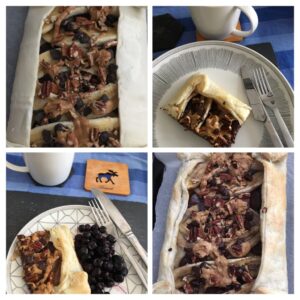 Galette for breakfast, leftovers on Sunday with some blueberries

On Saturday we tried a new breakfast- a banana and chocolate galette (basically folded pastry). The recipe used an entire pack of buttons and an entire pack of vegan smarties (Doisy and Dam ones) so we were a bit more restrained! It had bananas, chocolate buttons, peanut butter and pecans, and was baked for about 25 mins. It was really tasty, and it also meant Sunday’s breakfast was also sorted. 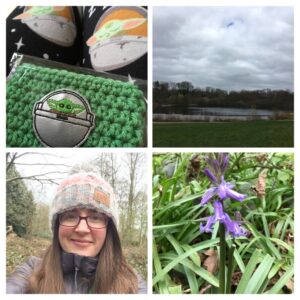 Then we were off on our now traditional Saturday walk (although I think we are allowed out more than once a day now? As it isn’t Stay Home, only Stay Local now…?). This time we walked almost the reverse of our route last week, over the bridge, into the park, and then this time exploring a new path which has only recently been opened to the public. We even saw our first bluebells!

I did a bit more weeding as I hadn’t quite finished on Friday, but my legs were shaking from all of the crouching down (pretty much 3 hours of doing squats!) so I didn’t last very long! I ended up back inside, baking more simnel cakes (this time, one for my parents and one for us- it was a recipe for one large one, but I just baked it in two smaller pans instead). 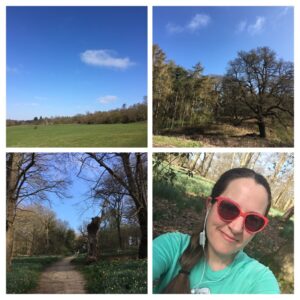 On Sunday I ran to Panshanger for a shorter than usual Sunday run, as I had planned a longer run the following day. It was so sunny and beautiful! 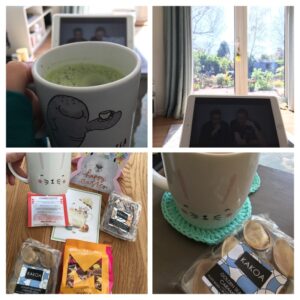 I had a podcast to watch (the teaching one- Two Mr P’s) so I settled down to watch that after brunch. It was so warm, so later on I made some tea and actually sat outside with my cup of tea! Shock!  I could not resist a few jobs in the garden (a smidge more weeding, and planting some squash and pumpkin seeds) but I mainly sat outside, watching the birds and even spotting the random fish that appeared in our pond. (Still no idea how it got there- we only created the pond last year and didn’t buy any fish). 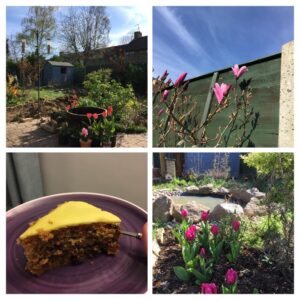 Tulips and the magnolia tree for spring vibes in our garden, simnel cake for Sunday night TV viewing

Even though it didn’t feel like a Sunday (the days had felt like a perpetual Saturday afternoon since Thursday), I had to remember it was, as I still have to do the LF covid tests -even in the holidays. I am still not a fan. I suppose they will catch some asymptomatic people, but depending on which studies you read, they have quite a high false negative rate, and I think some people have a false sense of security from being tested twice a week. It shows that they are not that accurate, as if you test positive through one of those, you have to book a “proper” test anyway.

We watched the next Line of Duty, but I am still not very enthralled by it. A slice of simnel cake helped of course.

Do you think we are allowed out more than once a day now? I quite like a walk in the afternoon if I had a run in the morning. Do you like simnel cake or hot cross buns?