I took this first photo in March last year- at that point I had gone since January without a haircut, and would have usually had one in the Easter holidays. 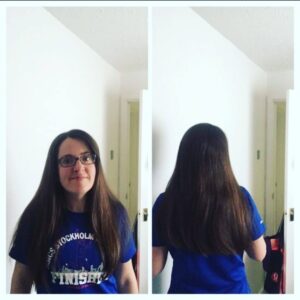 I thought a “before” photo would be quite fun, and I could see how long it would grow before lockdown was over. I didn’t think I’d be doing the same thing a year later! 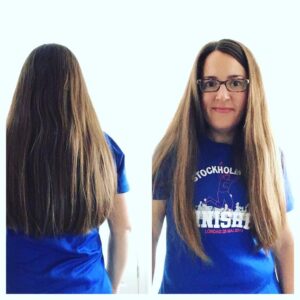 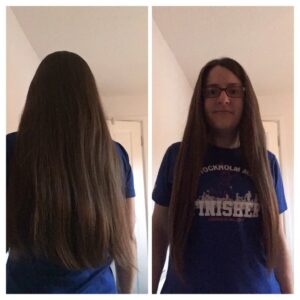 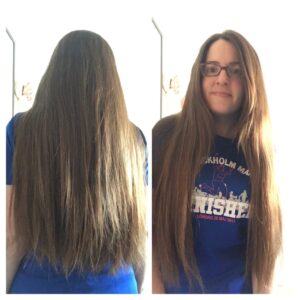 In some ways, I still think it is January- the lockdown seemed to make each week merge into one. I realised that I’d not taken a photo for a while. I’d just happened to decide to do it when wearing my Stockholm t-shirt, but I quite like it because I can see how much it has grown compared to the writing.

I know that hairdressers opened up last summer, but I was quite cautious and didn’t really fancy it (the one I go to has no external windows, and has a nail bar inside so always smells really chemically, and just the thought of sitting there in a mask for over an hour just didn’t appeal). I think I am going to have to brave it at some point, but I can put it in a plait for work/ running and so it doesn’t bother me too much (we shall see how that changes once it gets warmer). I have been washing it not too many times a week, and using deep conditioning treatments when I remember. I also have this gorgeous leave in spray from Lush, called Supermilk (made with oat milk and lovely things), so I use that to protect it from the hairdryer, but I think the ends are looking quite dry now so I keep being tempted by trimming it myself…

Onto holiday bits- the first day of the Easter holidays was of course, pancakes for breakfast and a long walk, this time to Panshanger. There’s a bridge over the dual carriageway which goes into one end of the park, and I had tried a few times to find it and never managed. We found it this time (I think they’ve improved the signs) so that was exciting- it means I have more possibilities for running routes too. 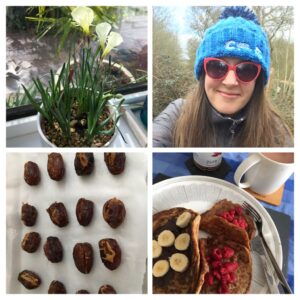 I also made some peanut butter stuffed dates (my favourite snack), did some garden jobs and make a carrot cake.

We have been watching Your Honor in the evenings, but I was finding it so stressful, that we gave a new series a go- The Flight Attendant. Well, this one is no less stressful! I need to find out what happens, but I can’t work out when I actually want to watch them because it leaves me feeling so frazzled! 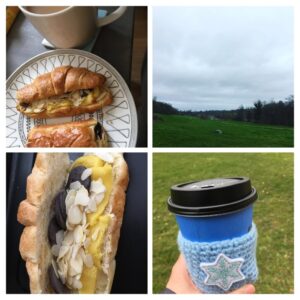 On Sunday I made a chocolate almond croissant- basically one of those delicious La Boulangere Vegan Croissants, cut in half and filled with a little marzipan, chocolate buttons and flaked almonds. Perfect after a long run. 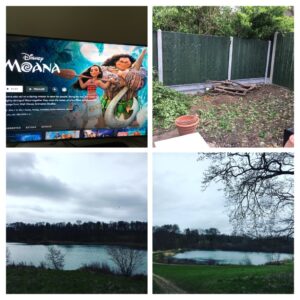 I did a bit more pottering in the garden (mainly cutting leaves and twigs from the logs- I am saving the twigs for a nature pile near our pond, and will chop up the logs at some point for a log pile), and then I relaxed with an afternoon movie- I’d not watched Moana for ages, and with the promise of warmer weather over the next couple of days, it seemed to match perfectly.

Then we watched Seaspiracy, which was all about how bad fishing is for the planet basically. It had some horrible scenes of dolphins and whales being caught/ trapped/ killed (reminded me of Blackfish a bit), and some shocking information about where most of the plastic waste in the sea comes from (not straws….). It was interesting, but also just so sad to show what humans are doing to the planet. I also felt fairly helpless, as I’ve never eaten fish, so it’s not as if I could stop that to help.

When did you last have a haircut? Or do you cut it yourself?

2 thoughts on “How long since a haircut?”