After being out late the night before at Taskmaster, both my dad and I were glad that Jersey Farm parkrun was back on, so we could have a relatively late start to the morning- it’s only a 10 minute walk from their house so I don’t even need to leave home until 8.15am- a lie in compared to tourist trips! 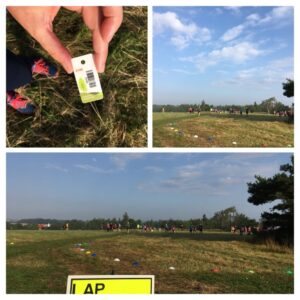 The weather was so warm for mid-September. The wildflowers had been mown down and the long grass put into hay bales, but the mixture of trees and open fields are always pretty. We bumped into loads of OH ladies and people from Ellenbrook Fields- it felt like such a nice social event. Some had run from Hatfield to make the parkrun sandwich their final long run before the London marathon, and so once we finished we waited around to cheer on some of the other runners. I also met one of our runners in the flesh after we have regularly commented on our running posts within the group! It was strange to see someone in person who you think you know (a bit like meeting someone from a blog/ instagram in real life too), but so lovely to finally meet properly. In the end we had to head off as Dad was going to football so we could not hang around for too long but we could have easily chatted for ages.  It did make me miss EF even more as so often you’d bump into people you had not seen for a while, and end up chatting  and helping to pack away the gazebo/ funnel because you had chatted for so long. I have said it before, but really what am I going to do for my 250th? I don’t really want to be at JF because one of the reasons EF has not re-started is linked to someone linked to JF.

On Sunday morning I went for an OH run- again running to meet them and then we ran down to the lakes and back up. We met more OH ladies (on a virtual 10k race) while we were out too. It felt like a social running weekend, something that I’ve not felt for a while.

A huge mushroom that I saw on my run, sedum in the garden and a hazy sky 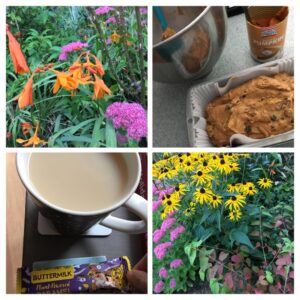 Vegan mars bar type thing from my vegan box went well with a cup of tea.

I did a lot of pottering in the garden and even did a spot of baking- a pumpkin spice loaf from A Virtual Vegan (I love her website- she was from the UK but moved to Canada, so I love that the recipes are in grams and not cups because it’s way more specific. Plus every recipe I have tried has been brilliant).

I was not looking forward to Monday as I had booked my flu jab for after work. I know it’s important, and particularly working in a school I am exposed to lots of germs, but I do not like injections (I sometimes faint) and so I have to work up to it. Having already had my 2 covid jabs this year I felt that the memory of the sore arm was a bit too recent and not yet forgotten.

It was OK in the end, and while I was sitting in the chair after (you have to wait for 10 mins to check you are OK) I saw Andy outside- he’d come to meet me with a Starbucks and also a vegan Belgium bun from a bakery that had just opened in town (he’d had his jab the same day but at a different pharmacy). A bit of sugar always helps in the flu jab recovery process! It also helped as I’d rushed away from work quickly and ended up needing to do a few hours in the evening to catch up. 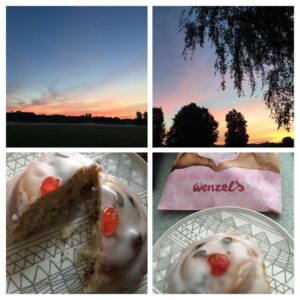 Gorgeous sunrises on my runs

I felt OK after, so I went for my usual morning runs that week (Tues, Wed, Thurs) but took them slowly and kept them to a 5k in distance. I saw some beautiful sunrises, but as we were reaching the autumn equinox I know that soon it will be dark the entire time, so I’ll make the most of the views while I still can. I was feeling tired but I think it was more due to the fact that work was busy and I was working most evenings for several hours (one day we didn’t eat dinner until 9pm because I wanted to get it done before we ate). 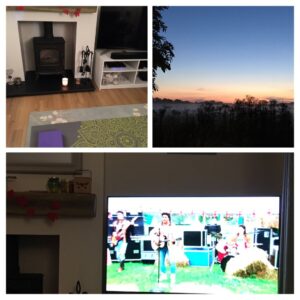 Yoga living room set up, another sunrise and Bake Off returns!

Our yoga was focused on the autumn equinox as well and I really enjoyed having that additional focus to the session. I have still been setting up in the living room instead of my office, which gives me a bit more space, but the mat does slip on the rug a bit. It means I can lay on the sofa under a blanket for the nidra session after, which is a bit like guided meditation.

I did manage to find time to watch Bake Off (although I can never fit it all in on a Tuesday so I have to hope that I don’t see any spoilers before I’ve finished it), and of course I was excited for the new Taskmaster (although this series isn’t the one we saw being filmed).

What should I do for my 250th run? Tour somewhere? Or go to Panshanger?