The Monday after the Brighton half was a busy one, as after work and a speedy dinner we drove up to Cambridge to see the Manic Street Preachers. After seeing Ash a few weeks before, I was looking forward to the music, and the band itself were amazing, but the crowd, less so. We were near the back, but despite the venue requiring masks, hardly anyone was wearing them, and people were really crowded in. A few people were friendly (one tall guy even apologised for standing in front of me, but I am used to listening and not seeing anyway, and there was nowhere else for him to stand). We had a few people near to us who were totally drunk and shoving into other people, falling over and even dripping beer on me, at which point Andy asked them to calm it down (we could not move anywhere else as it was so crowded). They got a bit aggressive and at one point the guy even shoved me, which totally shocked me. They were with a lady (not drunk) who saw and apologised, and tried to calm them down and sort of keep in between them and everyone else (it wasn’t just us that they were shoving into) but it did sort of ruin the concert a bit.

As we had a late night, I decided to run after work on the Tuesday instead of in the morning, which turned out to be a very good decision because it was gorgeous weather- the trees were looking beautiful. 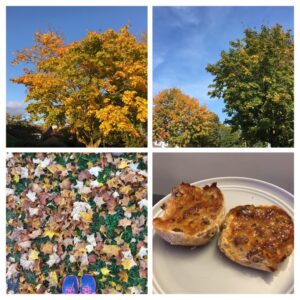 A hot cross bun and tea was waiting for me after my shower- perfect. 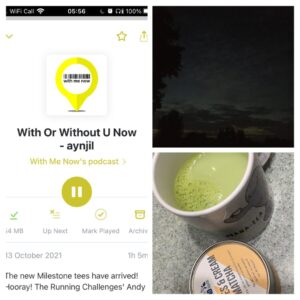 Wednesday and Thursday mornings were back to the early morning starts- it’ so dark now and I’m not sure how long I’ll continue them for. I know that it will be dark in the evenings too, but the streets are so quiet first thing that it feels a bit spooky, whereas after work there are people at bus stops and more traffic about. Yoga on Wednesday evening was very much needed (I’m sure you’ve seen the meme of the tin man trying to do yoga- that’s me most weeks anyway) and the nidra at the end was the closest I’ve been to sleeping during it for a while! 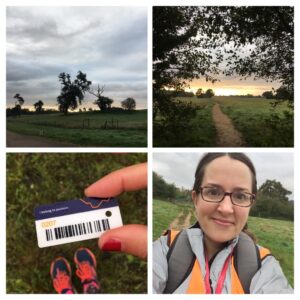 On Saturday Andy had the car, and I’d volunteered to tail walk at parkrun. It’s one of my favourite roles, and so I was really looking forward to it. I’d seen earlier in the week that the new milestone t-shirts had gone live, meaning I could order my 50 volunteer top, but it didn’t arrive until Saturday morning (when I’d already left). Never mind, I kept my jacket on the whole time so it’s not as if anyone could see it!

Before we started I chatted to one of the other volunteers (who I found out on Sunday is also in OH ladies)- we both agreed that time keeping was super stressful having both done it once but not again. She was keen to try out a new role, and was going to be token scanning but in the end was moved to be handing them out.

I did feel a bit panicked when I was given a walkie talkie- I’d forgotten that side of the role! I had to radio in at each marshal point to keep the RD up to date with where we were. My shocking left and right knowledge scuppered me for a bit as I had to press the big button on the left, and spent ages wondering why it wasn’t working, only to realise I was pressing buttons on the right. Ooops. I also had a shocker when describing where I was (eg, there aren’t numbered points) so it was “I’ve just passed the marshal at the end of the cow field before the lakes”- and the worse one “I’m just coming up to the big wooden owl sculpture”- this is clearly a phoenix as it has flames all over it. He knew where I meant anyway!

At the back were two ladies walking together, one in a 200 marathon jacket and some Run Disney gear, so after a bit I got chatting to them- they were doing crazy challenges like running 8 marathons in 8 days, and one of them had done things like the Goofy Challenge (basically running all the Disney races over a weekend- with the marathon on the Sunday). I loved chatting to them. As we neared the end, the rain started, and then got torrential pretty quickly. I was so glad I’d worn my jacket (this was a last minute decision) but hadn’t packed a hat so I was having trouble seeing with all the rain streaming into my eyes. 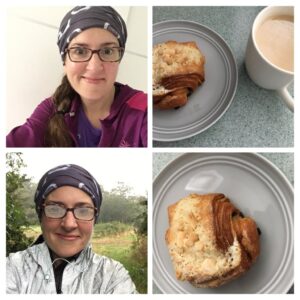 I had to laugh by the time I got home as I was just dripping. Never mind, skin is waterproof and after a hot shower I felt fine. I had put a vegan croissant in the freezer (the Flourpot Bakery in Brighton makes amazing vegan chocolate coconut almond ones) and so I heated it up for breakfast. Perfect. 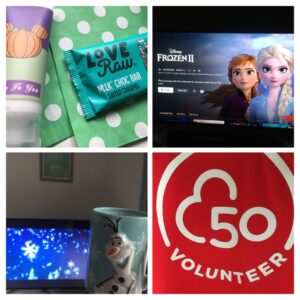 After some work and cleaning, I sat down to watch Frozen 2.

Sunday was rather grey and overcast, so I kept the run to a short 6 miles. Later in the afternoon we headed over to see Andy’s parents (trying to sort out a potential holiday- we were meant to be going to Disneyland Paris as a big group, but had cancelled as our niece’s passport hadn’t arrived in time so we were trying to work out what we could do if it arrived in the following week).

Then on to the final week of half term- always so busy with parents evenings added on top of everything else. I cut back on the runs, (4 miles on Tuesday and 3 on the Thursday) as I was feeling super tired. Now I’m not training for anything, running is just for the enjoyment/ fresh air/ mental health benefits, so no point in running loads if I’m feeling shattered. Yoga was on but I wasn’t home in time for it. We did have a movie night where we watched Muppet’s Haunted Mansion (about the scariest film I can cope with!), and then had a rather late night on the Thursday trying to pack (because in case you didn’t work it out, our trip managed to go ahead!).

Do you like scary films? Which volunteer roles do you enjoy the most/ least?

2 thoughts on “Tail walking and half marathon recovery”