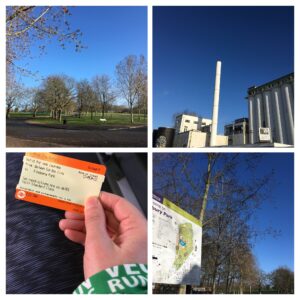 On the 12th March I took myself on a little solo tourist trip. Dad was away, so I could either go to Panshanger, or venture further afield.   I had seen that the Vegan Runners were doing a takeover a Finsbury Park parkrun, and it is fairly near to me but I’ve never been, so I decided I would head there. It’s on the same train line from Welwyn Garden City, although the train aren’t that frequent (2 or 3 an hour), so I had to be prepared.

I was at the station just before 8am and arrived at Finsbury Park station at around 8.20am. Plenty of time, and I’d allowed time in case of delays and cancellations etc. It turned out to be very lucky indeed, because I first got lost in the train station (there are two exits and I tried to go out of the underground exit and so my ticket didn’t work- I had to go back under the tunnel and out of the over ground exit), and then once out I got totally confused about the direction, and turned right rather than left. After walking for a bit and seeing no park (on the map the park is right next to the station), I did what any sensible person would do, and first put on my Garmin to track my run, and then looked on maps on my phone to see where I was. Yup, the wrong direction totally. 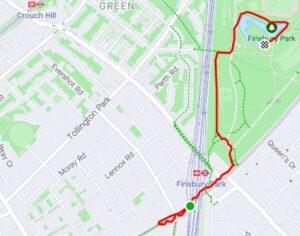 Once I was pointed in the correct direction, it didn’t take long to find the park, but I am glad that I didn’t get the train that was meant to arrive at 8.45 as I would have been panicking at that point.

The park had huge wide paved roads, and was filled with runners going in all directions. I was not quite sure where the start was, so wandered around taking photos until I saw a big group of people gathering. There were lots of people with the Vegan Runners vests and tops and buffs, and most of the volunteer roles had been filled by the club. I was on the lookout for Ed Miliband as I hear he often does this parkrun, but no joy this week.

The new runners briefing (which I think is soon going to be called the “welcome” which I really like) was super- 2 laps, and a hill- simple.

Then we walked to the start and the main briefing was given. The RD was a vegan and gave a few wry comments about how poor vegans are all malnourished and how he hoped some of them would make it to the finish line…

And then we were off! It seemed very busy- possibly the busiest one I’ve been to since lockdown (over 500 runners) but it was well spread out so it felt fine in that respect.  There were a few hills- one was OK but the second of each lap was much tougher. All the cheerful marshals helped of course! As I was coming up to finish my first lap, the leader raced past on his second, and I saw later in the run report that he had broken the course record in 14:58- what an amazing time! 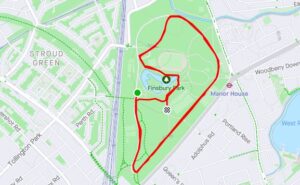 I really enjoyed visiting there, and when I looked at my results later I realised that it was my 80th different parkrun event- 4/5 of a Cowell! I love going to parkrun with my dad (and brother when he comes along), and of course the fab OH ladies, but sometimes it is nice to take yourself off and do something on your own. It also made me realise that I need to do a bit of prep before my next parkrun tourism as I cannot just rely on getting my phone out once I am already lost- I need to look at the directions properly in advance! 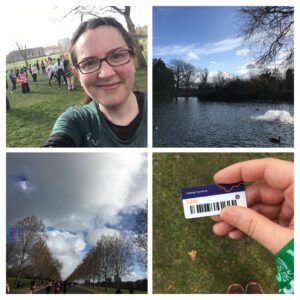 Post run, the lake before the run, mid run photo and finish token

I had a while before my train so took my time heading back to the station, and popped into Pret to get a croissant for breakfast (when in Rome…). I had looked up the train times and there were 2 around 10am, one was a slow train which departed first but got home a few minutes after the fast train. I nearly got on the slow train but when they announced the stations I didn’t hear WGC- turned out it was stopping before then, so it was lucky that I listened to the announcements and didn’t just rely on the train times that I’d looked up. 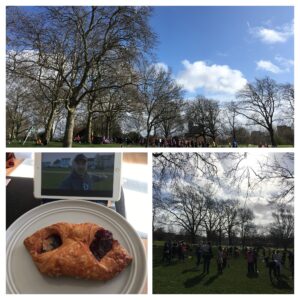 Andy walked to meet me in town, and so by the time we’d walked back and I’d had a shower it was quite a late breakfast, watching the latest With Me Now vlog as is now tradition for Saturdays.

Do you like to tour alone or with others? How are you with directions?