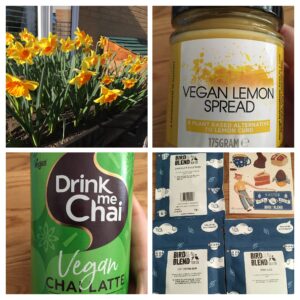 Recently we needed to pop to the garden centre, and went to the little farm shop that is next to it to have a mooch- I was quite excited to give the vegan lemon curd a go (I love lemon curd on a toasted hot cross bun) and the chai drink too. The March tea club had another adorable postcard (they are all so good at the moment) and of course some fab themed tea including Hot Cross Bun tea. 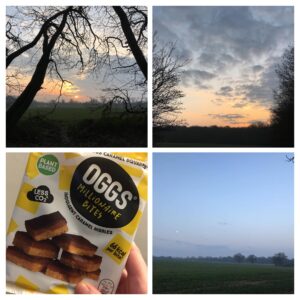 I also got these Oggs millionaire bites in my latest vegan box- again, so delicious. But the best news was that the mornings are now light enough to go for a run around the fields instead of sticking to streets! (This only lasted until the clocks went forwards, but will be back to being light again soon). I just love running around the fields and through the woods, hearing the birds and being away from traffic. 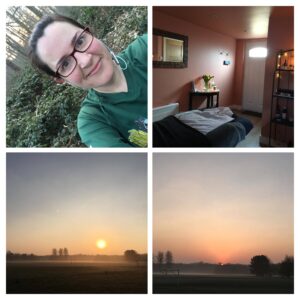 A happy face in the woods and some beautiful sunrises!

It feels like such a treat to be around to view the sunrise- because it’s so quiet in the morning it feels like not many people see them. 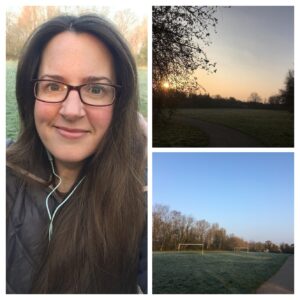 I was up early one morning (not a run day) and decided to head out for a walk as I could not sleep.  It was a frosty clear morning so again I was treated to wonderful views. I was meant to be getting my hair cut so it was a pre-haircut photo, only the cut ended up being postponed. 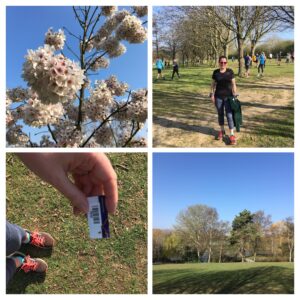 On the Saturday, Dad had asked me to pick him up and take him to Stevenage as he had to get the train from there later, so of course I was happy to oblige. We had a wonderful morning at Stevenage- the weather was again glorious and it was fantastic to be out enjoying the sunshine. After we went and got breakfast from the café and sat outside on the terrace looking out over the water. Such a good start to the weekend. I dropped him at the station and then headed home, where Andy had ordered Crosstown doughnuts for the weekend. After some work, I headed out for my haircut, and it was so warm I got a smoothie on the way back home. We get a drink from Caffe Nero each week via Vitality, and they have recently included Innocent smoothies, which I would prefer over their barista fruit drinks (not quite sure what they are made with?). I am always a bit suspicious of spirulina as I tried some once and it tasted so fishy, but luckily this only had a small amount and I could not taste it. 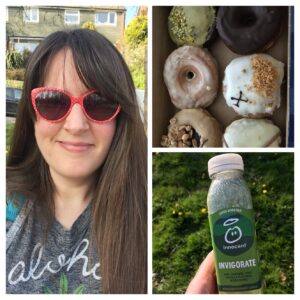 The “green juice” did make me think of The Dropout (the series about the Theranos company)- but I promise that’s not why I had it!