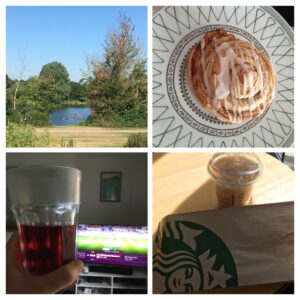 Stanborough lakes as seen on my run, a cinnamon roll from the local vegan market, iced tea and the Euro’s, Starbucks plant based cheese toastie.

July was hot! I don’t think you need me to remind you of that. Climate change is real and it is awful.

So, how did I try to keep cool during July? Mainly, running first thing before it got too hot, or in the week of the crazy 40C, not running at all. Heat exhaustion and heat stroke is dangerous, and I saw no point in going for a run when it was already over 20C at 6am as I would not have a chance to cool down at work. I did go on a few early morning walks but that was enough.

Of course iced tea was good for cooling down too. We often cold-brew fruity tea (basically add fruit tea and cold water to a bottle, pop into the fridge and leave to infuse during the day)- and this was a lovely refreshing drink to have in the evenings.

I kept seeing that Starbucks now do a plant based toastie (cheese and tomato) and I really love a toastie and it is something I miss since being vegan. (A cold falafel wrap just doesn’t seem like as much as a treat as a hot toastie, although if they could replicate the delicious Pret hummus chipotle wrap then I would choose that over anything else). One Sunday I decided to walk into town and treat myself to one to see what they were like. It was really good, but of course it was a baking hot day so I got really hot on the walk home!

One weekend the vegan market was in town- we missed it last time, so I was keen to get there. There were loads of amazing looking food stalls, but I could not resist a cinnamon roll. It was more of a pastry than a dough-like roll, but very delicious. And let me remind you that if you convert to a vegan diet you will reduce your carbon footprint by around 40%. Even if you don’t care about the ethics of animal agriculture, it really is so important to look at the bigger picture of how we can limit climate change. 51 per cent of worldwide greenhouse-gas emissions can be attributed to animal agriculture. So maybe give it a go… 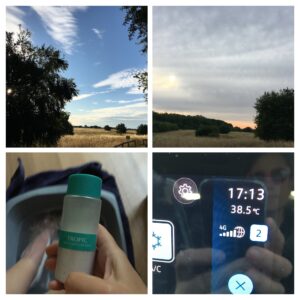 I was given this Tropic foot soak a while back and discovered that sitting with your feet in cold water (plus some of the soak) was another good way to cool down in the evenings. 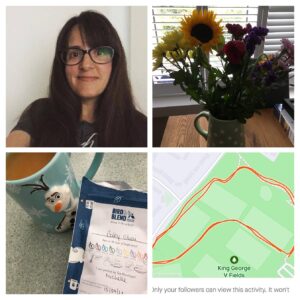 I’ve been a fairly regular visitor to our local junior parkrun too- our niece and nephew have been enjoying it and as it’s less than a mile from home it’s been easy to head down and meet them. Typically I’ve gone out on a run first (before it got too hot) and Andy has walked down and we’ve all met at the start. In the winter I may opt to have my run after as then it would at least be light.