After the Royal Parks half, I was back to just ticking over with running and yoga, with walking thrown in for good measure. I was at Panshanger parkrun twice- once as a parkwalker and once as a gentle run the day before the half (although that turned out to be the alternative route when the cows are in the main field so you have another steep hill to contend with- every other time I’ve either been somewhere else or been volunteering!). 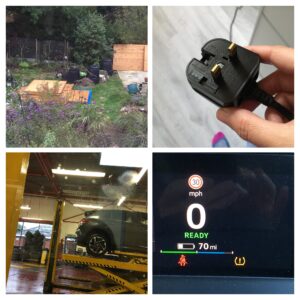 October seemed to be a time for additional life admin that needed doing- we had ordered a shed to be put up but when they came to put it up, the base (that had been put down previously) wasn’t 100% level so they had to leave it- we then had to store the shed in the garden in pieces, while getting someone to fix the base, and trying to keep it dry. Cue massive tarp and a few struggles while the two of us moved it off the base so the person could fix it. I dropped my hair straighteners and the third pin sheared off. Upon closer inspection it was just a placeholder pin, with no earth or wires in it (the actual plug was like an electric toothbrush charger with only 2 pins), so I found a replacement online and thankfully they work. And then the joys of the tyre pressure light coming on- after pumping them up a few times I took it to a garage and they found a massive nail in there, but could not repair it right away so that was a fun few days! 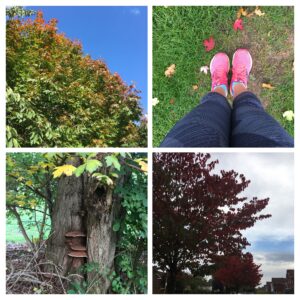 October running was very enjoyable- after doing the half I could just run distances that I fancied, although I do have Brighton in Feb so will need to ramp back up the miles before Christmas really. 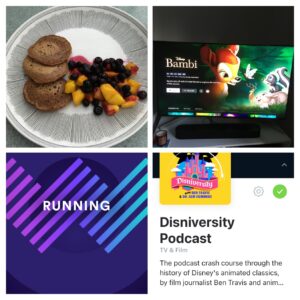 Pancakes, Bambi, With U app and fab Disney pod

I discovered a fantastic podcast called Disniversity, where the two hosts talk about each animated Disney movie. Some I have not seen (I saw the start of Bambi when I was a child but then my sister was sick so we had to leave the cinema).  I’ve watched a few that I’ve not seen since being a child (such as Sword in the Stone) but have so far avoided the creepiness of Pinnochio- I cannot bear to watch that again!

The With Me Now pod mentioned the With U app, as it is linked to parkrun (a sponsor I think?) and they have some free workouts. I have completed a few of the fartlek sessions and quite enjoyed them.

October finished with half term- a family weekend at DLP and then a trip to Norfolk including some parkrun tourism, so I’ll keep that for a separate post.

How was your October?