How is the weekend over already? 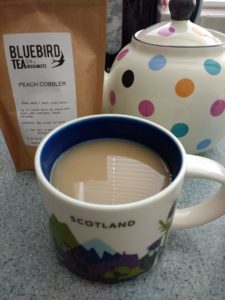 Last weekend was full of unpacking, weeding, a little visit to the garden centre and a 10 mile run (my first in double figures for a while). This peach cobbler tea is delicious (in my new mug). 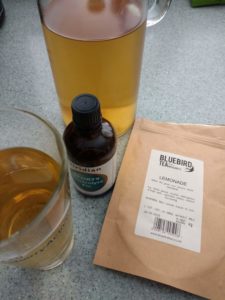 I’ve been having success with the viridian sports mix- I have been adding it to either coconut water or iced tea (this was lemonade iced tea) and so far I’ve not had a headache when using it. 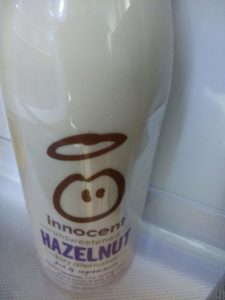 I saw this Hazelnut milk in the shops and could not resist- it is pretty amazing and although it’s been way too warm for it this week, would make a delicious hot chocolate.

Monday- 10 mile run, plus a walk into town later on

Wednesday- yoga including a bit of time outside on the grass attempting handstands- it was the closest I have got and my shoulders were really achy the next day from it.

Friday- home to find that Andy had bought these little peanut butter caramel things from M&S- so a couple plus a cup of tea made the perfect start to the weekend. We had a nice walk after dinner once it wasn’t quite as warm. 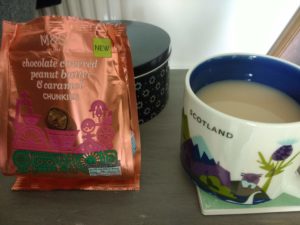 Saturday was parkrun celebrating 70 years of the NHS. I was going to go to Panshanger as I’ve not been there for a while, and then early on Saturday morning I got a message saying we’d be out on Sunday morning, so I decided to run there and back on Saturday (parkrun sandwich) to get my long run in then. 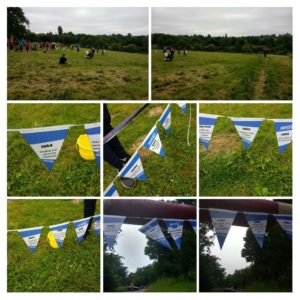 The run there is just over 4 miles, and I always panic about missing the start, although I got there at about 8.50 so good timing really. There was bunting up all over the car park entrance, by the finish funnel and where the scanners stand. It was brilliant to read so many of the amazing achievements- vaccines/ transplants/ screenings (although how was it that in 1954 the link between smoking and cancer was discovered, and smoking wasn’t banned in public places until 2007???). Before the start they asked everyone who worked for the NHS to come up so we could give them a clap, and a local nurse (who I think they said was an MBE) did a little speech. A few people had paper on their backs saying things like “thank you NHS for saving my life” and listing various illnesses.  It was brilliant to hear that some GP’s in Hertfordshire are exploring prescribing parkrun to people- I really think that being involved in a community like this is way better for your mental health than your physical health, and just getting people outside for some fresh air is so beneficial.

Then we were off. I was in no hurry, knowing I had to run the 4 miles home, and just really enjoyed the scenery. I saw someone from my running club but she was ahead of me and I didn’t catch her up.

I finished with 30:30, and made sure that as soon as I was scanned I started running home so I would not get too stiff. 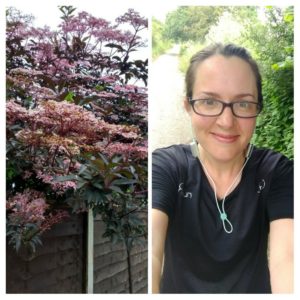 I saw this pretty plant on the way back- lovely red leaves and layers of pink flowers- I need to work out how to search google for it.

Did your parkrun celebrate the NHS?

8 thoughts on “A catch up and happy birthday NHS!”