I was rather happy that we stayed in York for the final night of our trip to Scotland, because this meant not only more parkrun tourism, but ticking off a rather tricky letter. I think the only other one is Yeovil?

After leaving Newcastle, we drove down to York, stopping off at a NT place for a walk around the gardens. As a side point we found it good to break up the journeys with stops this time, as our default setting is to power through and then feel all stiff when we finally get out of the car. We managed good amounts of steps each day, with a high of 27,000 steps on the Thursday and a low of 13,000 on the first Saturday.

I was very pleased to see amazing looking scones, so I treated myself to a cream tea as a sort of late lunch- it was so good. 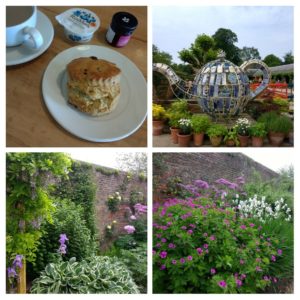 Once in York we had a wander around- it was jam packed with people, and such a hot and sunny day. We went for dinner in Source, which had loads of veggie and vegan options, I was spoilt for choice. We shared a lime-grilled avocado to begin with. I’ve not had warm avocado before (I don’t think) but it was really tasty. It was served with a little bit of crusty bread, so it was a bit like warm guacamole or something. Very creamy and delicious. 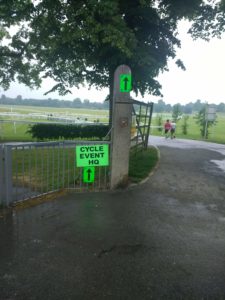 On a rather damp and drizzly morning, I set off to the parkrun on the Saturday morning. It was around 1.7 miles from the hotel, so good distance for a warm up. I’d much rather run than have to navigate bus timetables and that sort of thing, and although I needed my phone out at first (the roads in York are a bit twisty) once I was on the main road heading out of the town, it was all fine. York parkrun is held on the racecourse, so there were signs once I got close which helped too.

The website does say to allow time to get from the road to the start, and it ended up being a kilometre, so you do need to be aware of this. Confusingly there were signs for a cycle event (cue a slight bit of panic in case all the lycra people were cyclists) but then I saw a couple of milestone t’s so I knew I was OK. 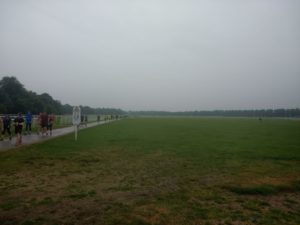 By then it had started to rain a bit harder, and there is really no shelter here at all either. Everyone was trekking along the edge of the track to the start, and of course as soon as I stopped running my glasses steamed up more.

The new runners briefing was very welcoming, and they had a few pacers including a run/walk pacer who came and introduced herself in case anyone wanted to go with her. 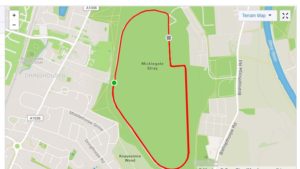 Now, I had read it was pretty much pancake flat, so thought it might be good for a pb, or at least a fast time, but I wasn’t feeling it, so in the end I decided to aim for the 28 min pacer. The route starts at one side of the race track, you do a full lap (3 k approx) and then a final 2/3 of a loop (around 2km) to the finish. I must admit that if I ran here each week I would find it mentally very tough. It started off feeling a bit interesting to be running next to the race track – we were inside the fence on a path, with the track going around the outside (although my thoughts wandered over to the morbid side of horse racing, wondering how many poor horses had been shot on the course), but you could see the whole route the entire time. It was amazing how quickly the front runners steamed ahead of everyone else, and although I managed to get to the finish on my first lap without being lapped I don’t think I’d need to be much slower to be overtaken (this doesn’t bother me but just makes it more congested and surely more confusing for the volunteers).

The scenery around the outside changed a little bit- there was a lovely wooded area to one side and you passed the grandstand near the finish area. But it was pretty much the same view all the time. I am not a huge fan of long straight roads as I just feel like I am not moving. The finish at Ellenbrook Fields is along the old taxiway and it’s a km from start to finish,  and that can feel like a slog. I must admit when I got to the 3km point I wasn’t enthused about running 2 more with the same views. I do think it would be tough on a sunny day too, as there was little shade on the course.

There were however some lovely cheerful marshals out on the course, and a few runners milling around the finish area cheering people in. The pacers did a great job too- I started further back and so took a while to catch up the 29 min pacer, only getting the 28 min pacer in sight near the end. 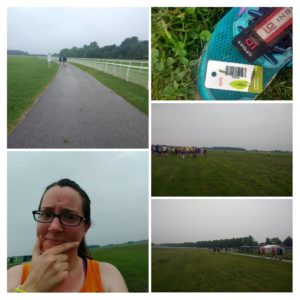 Then it was time to head back- the rain that had eased off during the parkrun was back so by the time I got back to the hotel I was totally drenched- the hot shower afterwards felt so good (or could I have saved time by just putting the shampoo on my hair while I was running?). 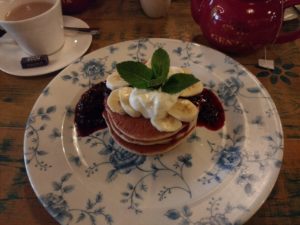 We headed to The Cosy Club for breakfast- lovely pancakes with bananas, berries and creme fraiche, plus a pot of tea, and then it was time to drive home- in keeping with tradition we of course stopped off at a final NT place for a walk around some woods and gardens. 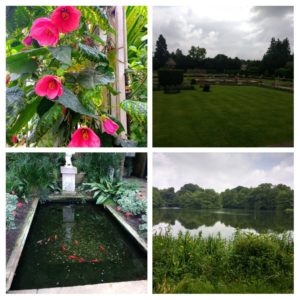 Are you a fan of parkrun tourism? Are you hunting any particular letters or doing other challenges? I quite like the pirates challenge (7 c’s and one r) but I’ve done all the local C’s already. I enjoyed my Herts challenge too (running all the parkruns in Hertfordshire) so I feel like maybe a new county would be good to consider.  I still mainly aim to be a tourist if I happen to be away somewhere, although the closer I get to finishing the alphabet, the more likely I am to become more serious about it!

4 thoughts on “Why York parkrun? Yes”